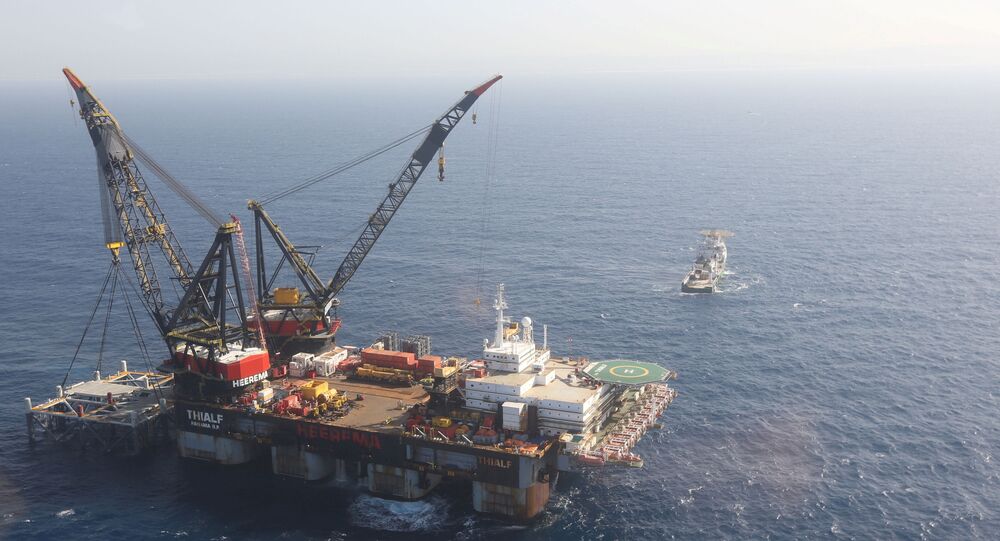 Israeli gas supply to Egypt will surely bolster relations between the two countries, claims a former envoy, but it won't be able to get the two peoples closer, simply because Egypt still harbours strong anti-Israel sentiments that even President Abdel Fattah Al-Sisi cannot change.

It has been a month since Israel, which has been positioning itself as a new regional gas player, started exporting resources to its southern neighbour Egypt.

According to reports, the initial supply will come from the Leviathan field, considered the largest energy project in Israel's history, but gas is also expected to flow this summer from the smaller Tamar reservoir.

Just a decade ago, that wasn't the case. Historically, energy-hungry Israel has been importing its gas from Egypt but that supply came to an end in 2011.

Zvi Mazel, Israel's former ambassador to Egypt, says there were several factors that contributed to the end of that cooperation.

First and foremost, it was the eruption of the Arab Spring that reached Egypt in January 2011.

© AP Photo / Khaled Kandil
Gas Line Between Egypt and Israel Blown Up by Unidentified Attackers - Report
"When President Hosni Mubarak stepped down and was later replaced by a Muslim Brotherhood Member Mohammed Morsi, who in turn was ousted by the current leader Abdel Fattah Al-Sisi, it reflected badly on the stability of the gas flow", he said.

The change of leadership hasn't contributed to the security situation either, with militants from various terrorist groups bombing the gas pipeline a dozen times during 2011 and 2012.

When the flow finally stopped in 2012, Egypt was forced to pay Israel some $3 billion in compensation for losses the Jewish state sustained when Cairo decided to abruptly cut off its energy supplies. Other law suits, from European and Asian consumers, swiftly followed. For the faltering Egyptian economy that was a severe blow.

But the problems didn't stop there. Egypt's population has been rapidly growing moving from 85 million people in 2011 to over a hundred million less than a decade later. The authorities have bee struggling to meet the growing energy needs of the people of Egypt.

Even the development of the Zohr gas field, considered the largest in Egypt and which produces 2.7 billion cubic feet of gas per day, hasn't been able to meet the demands of the population, primarily because Egypt was dragging its feet in developing the project.

"Once this reservoir is fully developed it will be able to provide Egypt with the energy it needs. But until that is achieved Egypt will probably need to rely on what Israel has to offer", said Mazel.

For the Jewish state this is a business that rakes in billions. According to officials, Israel is set to earn around $60 billion in the next 20 years from gas exports.

Gas as a Bridging Tool?

Most importantly though, the former envoy believes the gas deal could bolster ties between the two countries and even make the relations warmer, even though it will not change attitudes and sentiments towards Israel on the ground.

"A gas deal is linked between a couple of companies, not the people. Although we have a peace agreement with Egypt for 40 years now, they make sure to maintain relations on a very low flame with interaction between the two peoples kept to a bare minimum".

The reason for that is not only the lack of progress in the resolution of the Israeli-Palestinian conflict but also Egyptian and Arab nationalism that harbours little sympathy towards minorities.

"A lot of wars in the Middle East stem from the fact that the Arab population of this region doesn't recognise other peoples' rights to this area. Islam has also contributed its fair share to the problem. Although President Sisi is trying to change the narrative, Muslim scholars of Egypt largely ignore him continuing to spread anti-Israel sentiments".

That, however, seems to be changing. When President Al-Sisi came to power, Egypt introduced new textbooks that while still maintaining Mubarak-era attitudes towards Jews and Israel, did shift their approach to the peace deal between the two countries.