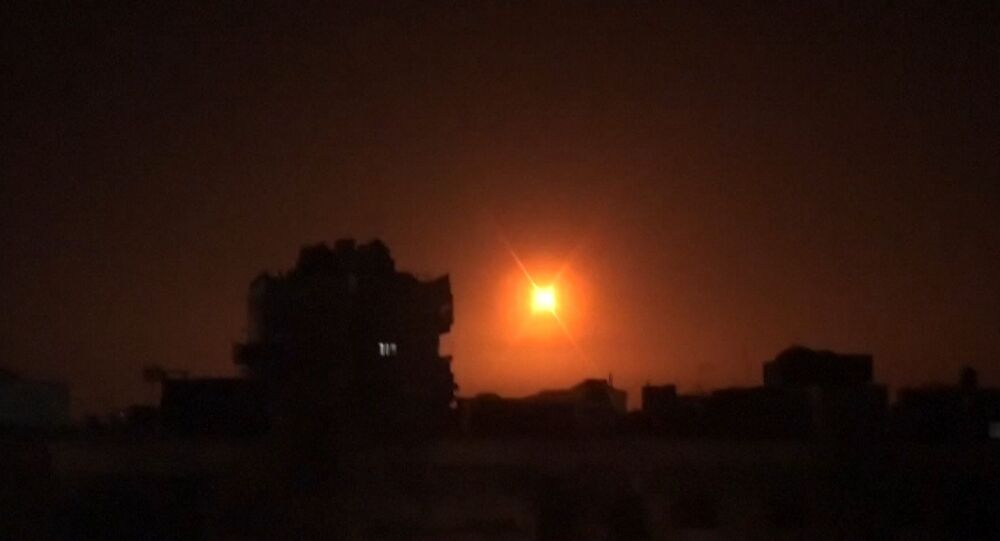 Netanyahu on Nighttime Strikes Against Syria: ‘Maybe It Was Belgian Air Force’

Syrian air defences reported intercepting multiple hostile targets over Damascus on Thursday night, with the missiles said to have come from the direction of the Israeli-controlled Syrian Golan Heights.

Israeli Prime Minister Benjamin Netanyahu insists that he doesn’t know anything about Thursday night’s attack on the Syrian capital.

“I don’t know what happened last night,” the prime minister said, speaking to Radio Haifa on Friday. “Maybe it was the Belgian Air Force,” he quipped.

“I don’t comment on one operation or another,” Netanyahu added.

On Thursday night at 11:45 pm local time, multiple missiles which Syrian military sources believe were launched from the vicinity of the Israeli-held Golan Heights were fired at Damascus, with Syrian media saying air defence troops intercepted and downed a number of them before they could reach their targets. Social media users posted videos of air defence troops intercepting projectiles over the night sky.

In accordance with long-standing practice, the Israeli military did not confirm or deny their involvement in the attack.

According to Israeli media, the strikes targeted weapons depots near Damascus International Airport, and came just hours after the arrival of unidentified cargo from Iran.

The strikes came less than a week after a separate Israeli attack on Damascus last Friday. In a report on the operation, the Russian military revealed that a Syrian Airbus A320 with 172 people onboard had to be diverted to the Russian base in Latakia province, facing the risk of accidental destruction by Syrian air defences during the strikes. Moscow accused the Israeli Air Force of making common practice of using unarmed and civilian aircraft as “shields,” adding that this was not the first incident of its kind in recent years.

Israel has conducted hundreds of airstrikes against its northern neighbour, often firing missiles outside Syria’s airspace from the Golan or Lebanon to try to complicate air defences’ operations. In September 2018, Syrian air defences accidentally shot down a Russian Il-20 with 15 servicemen onboard during an Israeli attack on Latakia. After an investigation, the Russian military concluded that Israeli F-16 appeared to have deliberately used the Russian plane as a shield. Tel Aviv maintains that Syria was responsible for the incident. In October 2018, the Russian military provided Syria with a batch of S-300s, and the number and intensity of Israeli attacks against the war-torn country have declined somewhat since then.

Earlier this week, Israeli and Iranian officials blasted one another’s actions over Syria, with the Iranian foreign ministry warning Wednesday that it would show a “crushing response” to “any act of aggression” by Israel against Iranian interests in the Arab Republic. On Tuesday, Israeli Defence Minister Naftali Bennett told Iran that it had “nothing to look for in Syria,” and said that Israel has been “fighting the arms of the Iranian octopus in Lebanon, Syria and Gaza” for “generations.”