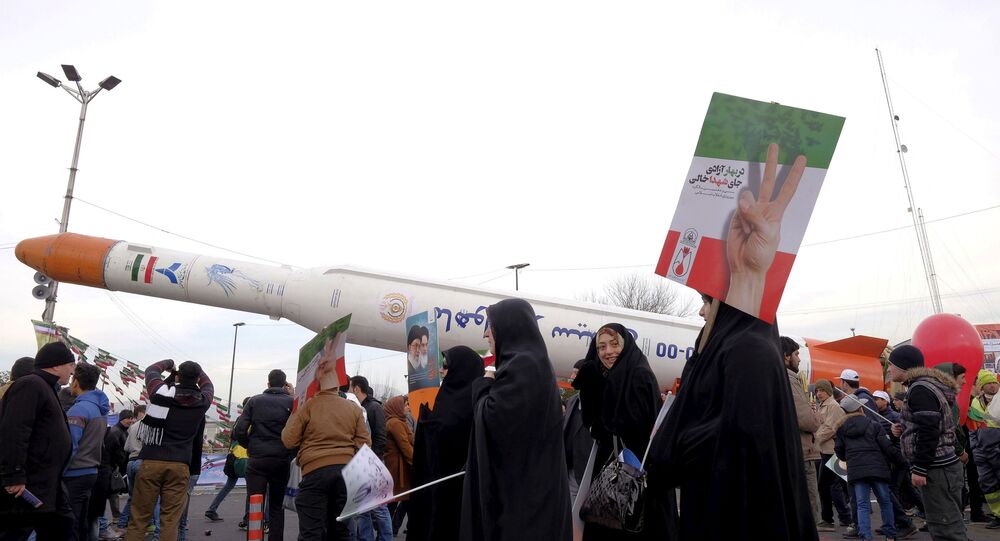 Tehran unsuccessfully tried to send its Zafar satellite to space on 9 February after two other failed attempts last year. The country has since announced that it will make another attempt in June 2020.

Iranian Defence Minister Amir Hatami has dismissed allegations issued by the US that the satellite carriers could be turned into military missiles and that the recent launch of a Zafar satellite was part of Iran’s missile programme.

"The satellite launch and satellite carrier […] are not related to missile [the programme]", Hatami said.

The defence minister went on to say that despite opposition from some foreign countries, Iran will continue to develop its satellite programme. He added that while the carrier doesn't have any military applications, the satellite that it will eventually take into orbit could be used for defensive purposes by the Islamic Republic.

© AP Photo / Iranian government handout
In this photo released on Monday, Oct. 1, 2018, by the Iranian Revolutionary Guard, missiles are fired from city of Kermanshah in western Iran targeting the Islamic State group in Syria.

Hatami also stressed that while Iran has already developed numerous missiles, none of them are designed to carry nuclear warheads – even if Tehran would have had any. He reaffirmed previous statements by Iranian officials that the Islamic Republic is not seeking to develop nuclear arms or the means to deliver them.

"What is forbidden is the manufacture and launch of missiles with the capability of carrying nuclear warheads that do not exist in the Islamic Republic of Iran", he said.

The minister's comments come after Iran failed to deliver a Zafar ("Victory" in Farsi) satellite into orbit after a launch on 9 February due to the rocket not gaining enough acceleration. Following the failure, Iranian Minister of Information and Communications Mohammad-Javad Azari Jahromi announced that another attempt will be made in June 2020.

The launch on 9 February was preceded by two other unsuccessful attempts to put a Zafar satellite, designed to gather data on earthquakes and other natural disasters from space, into Earth's orbit.