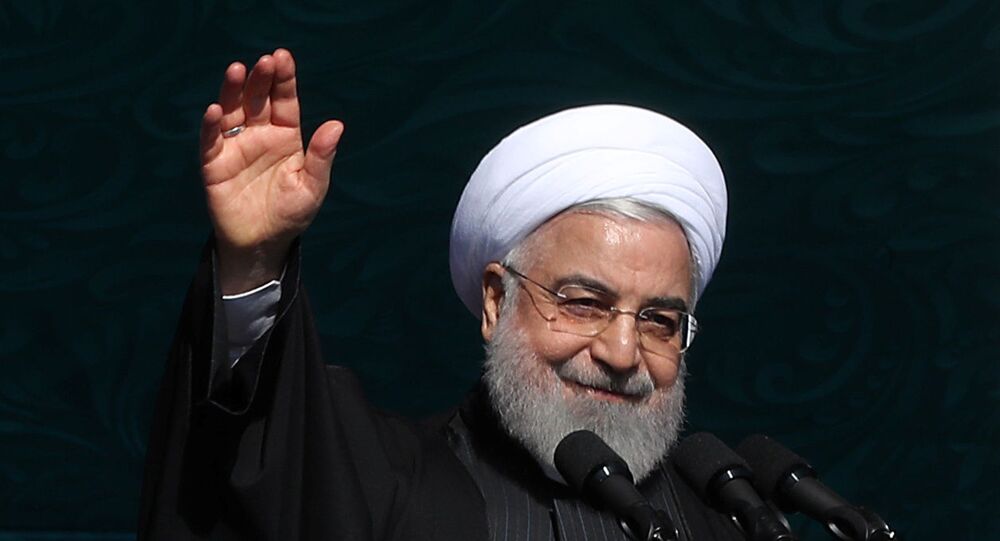 Iran marked on Tuesday the 41st anniversary of the Islamic Revolution of 1979 that saw the end of monarchic rule of Shah Mohammad Reza Pahvali in the country and the establishment of the modern Islamic Republic of Iran.

Iranian President Hassan Rouhani said, while addressing mass annual processions of the 41st anniversary of the Islamic Revolution in Tehran on Tuesday, that the United States has been aspiring to return to Iran for 41 years, according to Mehrnews.

The president said that it’s normal that the US do not tolerate the Islamic Revolution “because it knows Iran’s great power in the West Asian region”.

“US says we must return to 41 years ago but we say we don’t do so …  therefore, we see hostility of US has emerged during the past 41 years in various forms,” the leader said, arguing that Americans wanted to preserve the monarchy in Iran regardless to the choice of the Iranian people.

The president also noted that Iranian people are united and integrated “wherever national interest” or “when the revolution is concerned". He argued that during Gen. Qasem Soleimani's funeral, who was killed by a US airstrike during a visit to Iraqi capital of Baghdad on 3 January, all Iranian people "stood against the superpowers and America and voiced their opinion”.

“Martyr Soleimani was both a general in the battlefield and a senior diplomat in negotiations. He was martyred in route to talks with Iraqi Prime Minister not in route to battlefield. Martyr Soleimani was not seeking war and instability in the region; US and Israel are lying about him. He was after creating stability and offered security to the region,” the leader said.

Rouhani also said that the US wants to see in Iran a weak government that “does not want to take the heavy responsibility”. He highlighted that “the government, people, armed forces, the three branches, and everyone is united under the flag of the Islamic Republic and the Supreme Council of the Revolution”.

Tensions between Iran and the United States escalated when Washington withdrew from the Joint Comprehensive Plan of Action (JCPOA), known also as the Iran nuclear deal, in May 2018 and reimposed economic sanctions on Tehran shortly thereafter. A year later, Tehran responded by steadily abandoning its JCPOA obligations every two months.

Tensions escalated further in the aftermath of the US’ killing of Qasem Soleiman that led to a retaliatory strike by Iran against military bases in Iraq hosting US forces. Initial assessment by US military suggested that no American soldiers had been injured from the strike. However, later in February the US Department of Defence confirmed that at least 109 servicemen were diagnosed with brain injuries.

US Lied About Unsanctioned Supplies of Medicines, Food to Iran - Iranian Vice President

Businessman Explains How to Earn a Living in Iran From Burning US, UK & Israeli Flags