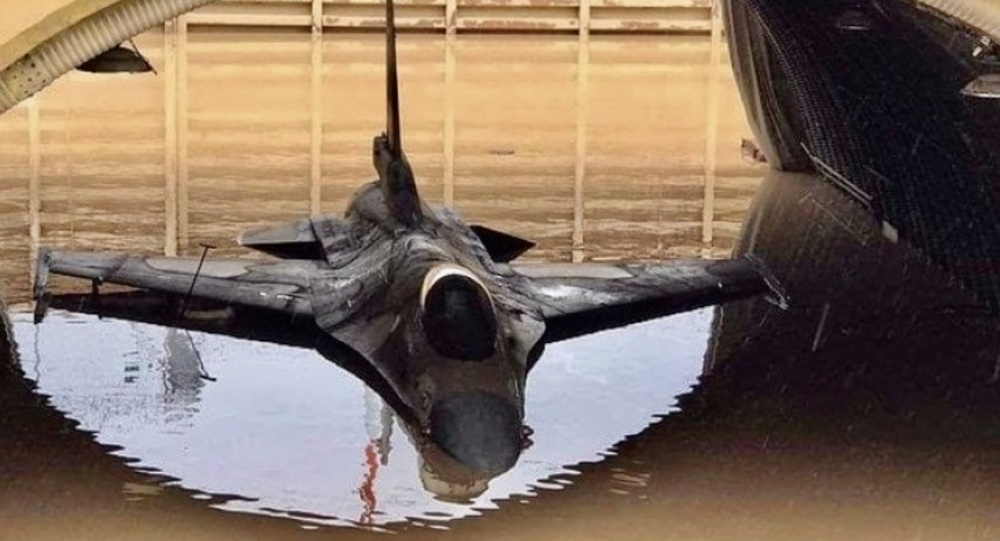 Three Israeli Air Force officers have been officially censured for their role in failing to protect several aircraft subsequently damaged by flooding. Eight planes suffered $8.7 million in damage, but senior officers who oversaw the mishap have escaped reprimand.

When a deluge opened up over Hatzor Air Base near Ashdod on January 9, it dumped some 13 million gallons in roughly half an hour, sending nearby streams over their banks. However, IAF officers on duty failed to react to the danger the downpour posed to aircraft stored in dugout hangars, which turned them into giant puddles, partially submerging eight F-16 Falcon jets.

​“The base was improperly prepared for the storm, though they anticipated it,” Barkan said. “They did not take all the necessary actions or give all the necessary instructions. Proper professional conduct in good time would have prevented or significantly reduced the damage."

"We took care of the base's plumbing in the past, but we definitely should have vacated the underground hangars," an IAF officer told Tel Aviv daily Yedioth Ahronoth on January 13. "At 5 a.m. the base was dry, then half an hour later the entire base was flooded with ... water in such intensity that concrete walls broke under the flood's strength."

"Two whole hangers were completely flooded; we made a mistake; we didn't evacuate them earlier," the officer added. "We will learn our lessons from this event. We prepared last week for the coming weather, prioritizing human life over damages to sensitive equipment and the base's aircraft."

Haaretz also noted that soldiers were trapped in the hangars by the flooding and had to be rescued.

According to Yedioth Ahronoth, the area is prone to flooding, with the base sustaining a similar amount of damage in a flood several years ago. The Hatzor Regional Council has tried repeatedly to solicit IAF help in building a new drainage system, to no avail.

"There is still work to be done," the anonymous officer told YA. "Every time one lake floods our base is in danger."

According to the Times of Israel, five of the F-16s have already been repaired and returned to service, but repairs on the other three are expected to take at least two more months.

However, Haaretz noted that senior IAF and General Staff officers who knew about the incident and its flawed handling were absolved of responsibility. In addition, the base commander, who is due to be deployed soon as an overseas military attache, has been allowed to step down as commander but will not be barred from assuming his next post.

Barkan also noted the IAF erred in attempting to cover up the incident, censoring early reports of the flooding and damage, but later admitting fault after photos of the flooded jets circulated on social media. At least three people were killed in Israel by flooding from the heavy rains, which social media users described as “biblical,” according to The New Arab.

Rain Planes? Some Flooding-Hit Israeli F-16s Will Only Return to Service by May, Air Force Says