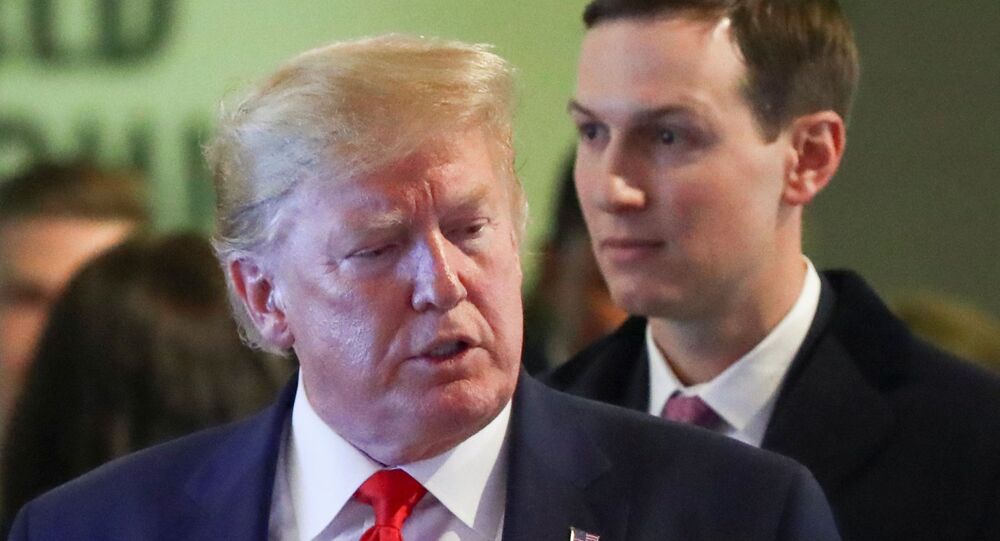 Late last week, the Arab League unanimously rejected US President Donald Trump’s Middle East plan, calling it “unfair” to Palestinians. Jared Kushner, for his part, said that he had put “a real offer on the table to break the logjam".

Yesha Council Chairman David Elhayani has lashed out at the US President’s son-in-law and senior adviser Jared Kushner over Donald Trump’s plan to resolve the Israeli-Palestinian conflict, which was unveiled last week. Yesna Council is an umbrella organization of municipal councils of Jewish settlements in the West Bank.

“Kushner took a knife and put it in [Israeli Prime Minister Benjamin] Netanyahu’s back. Kushner misled the prime minister. He misled everybody. He knew for a long time that Netanyahu wanted to declare sovereignty over the Jordan Valley and northern Dead Sea — he's said it many times over the last year. Gentlemen just don’t act this way”, Elhayani, who is Netanyahu’s ally, told the Washington Post.

He also expressed concern that the Trump plan stipulating a temporary halt on the annexations would stop Netanyahu from winning next month’s elections.

Kushner Touts US Plan on Resolution of Israeli-Palestinian Conflict

Elhayani’s remarks came after Kushner told CNN that he had put “a real offer on the table to break the logjam", adding that “what we hope that they’ll do is read the plan”.

He spoke after Palestinian President Mahmoud Abbas sent a handwritten note of warning to Israeli Prime Minister Benjamin Netanyahu last week, pointing out that the Palestinian National Authority (PNA) “now sees itself as free to disregard the agreements with Israel, including security cooperation”.

This was preceded by Abbas rejecting the Middle East blueprint as the “slap of the century" and a “conspiracy” which he pledged “will not go through”.

Trump, for his part, touted the plan as a "realistic two-state solution”, which was echoed by Netanyahu, who said that “the deal of the century is the opportunity of a century, and we're not going to pass it by”.

Referring to Elhayani’s remarks, Efraim Inbar, president of the Jerusalem Institute for Strategy and Security (JISS) think tank, said that “people who speak in such a language and use hyperbole are not always to be taken seriously”.

“I think that the American positions - there’s a need for a committee and only the committee can decide upon extending Israel's law to territories is something that the Prime Minister didn't take into consideration. And it complicates, of course, his political position”, Inbar argued.

He added that most of the public in Israel supports Trump’s Middle East plan and that “from an Israeli perspective, basically the plan addresses the most Israeli concerns and appeals to the mainstream in Israeli politics”.

Put forward by Kuchner and known as “President Donald Trump’s Vision for Peace, Prosperity, and a Brighter Future for Israel and the Palestinian People,” the plan was unveiled by POTUS on 28 January.

Palestinians rejected Washington’s role as a mediator in the settlement of their conflict with the Israelis after Trump recognised Jerusalem as the capital of Israel and moved the US Embassy there from Tel Aviv despite harsh criticism from the Arab world and UN recommendations to refrain from establishing diplomatic missions in the city until its legal status is fully determined.

The decades-long Israeli-Palestinian conflict has seen the PNA seek diplomatic recognition for an independent state on the territories of the West Bank, including East Jerusalem, and the Gaza Strip. Despite at least 138 countries including Russia recognising Palestine as a state as of July 2019, Israel has refused to do so, and has defied several UN General Assembly resolutions in the process. Since November 2012, Palestine has been a non-member observer state of the UN.