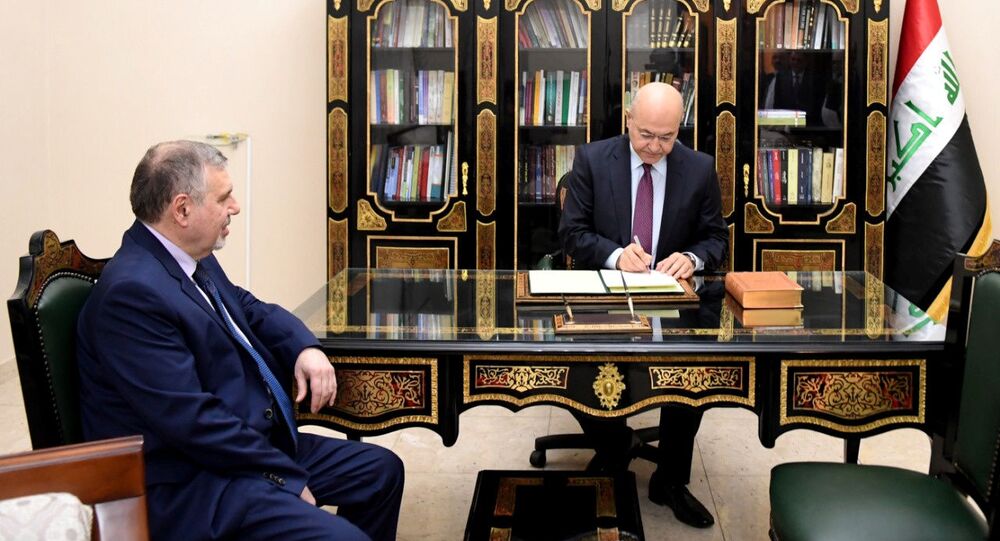 Within the past several months, US military bases in Iraq have been targeted with rocket attacks. The situation escalated beginning 3 January after a US airstrike killed top Iranian General Qasem Soleimani and several senior members of the Iraqi Shia militia near the Baghdad International Airport.

Newly-appointed Iraqi prime minister, Mohammed Tawfiq Allawi, said in a Saturday statement that he would defend the nation from foreign meddling, adding that he would not allow Iraq to be turned into a place for tit-for-tat сlashes and the settling of feuds.

"I promise to protect Iraq from any foreign meddling and not allow the country to become an arena for settling disputes in various conflicts", the statement said.

Former Iraqi Communications Minister Mohammed Tawfiq Allawi was appointed on Saturday as the country's new prime minister. His predecessor, Adel Abdul Mahdi, resigned in November but remained in office in a caretaker capacity until the replacement was found.

Iraq was engulfed in nationwide protests last year that reportedly sought the government's resignation, an end to corruption and an improvement to the quality of life in the country. The demonstrations and the ensuing civil unrest led to the deaths of over 600 people, according to official estimates.

On 24 December, the Iraqi parliament voted in favor of a new election law, which protesters have been demanding for several months.

© AFP 2020 / BULENT KILIC
US Working With Baghdad to Deploy Patriots in Iraq After Iran Missile Strike - Pentagon
On 3 January, the US military at the behest of US President Donald Trump assassinated Iranian Major General Qasem Soleimani, the commander of the Quds special forces unit of the Islamic Revolutionary Guards Corps (IRGC).

In response, Iranian missiles heavily pounded the Erbil and Al Asad airbases in Iraq - military installations that host a US-led coalition in the country.

The tension prompted Iraqi lawmakers to vote for the expulsion of all foreign forces from the country. Washington has threatened that it will impose additional sanctions on Iraq if US forces are expelled.

Nevertheless, within the past weeks, US bases in Iraq have been targeted with a number of shelling attacks of unknown origin.

Moscow Calls on Baghdad, Washington to Agree on Troop Withdrawal From Iraq