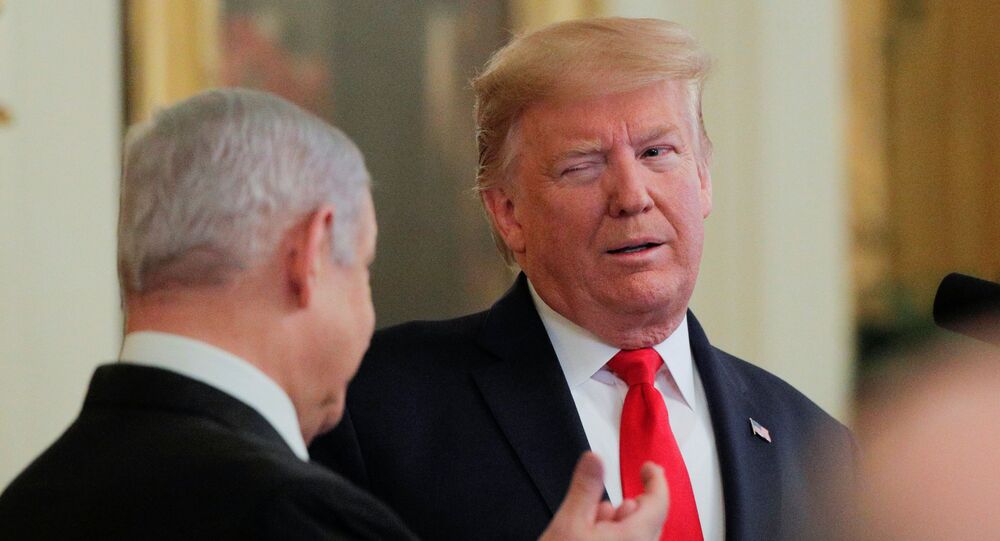 Iranian Envoy Lambasts ‘Deal of the Century’, Compares US to Satan

At the end of January, which was marked by an escalation between Iran and the US over the killing of the Islamic Republic’s top commander Qasem Soleimani, Donald Trump unveiled his long-touted peace plan. It angered the Palestinian Authority and Arab Nations, who have accused Washington of bias in favour of the Jewish state.

Mohammad Ali Hosseini, who recently took up the post of Iranian ambassador to Pakistan, has slammed foreign meddling in the Middle East, saying that the region “cannot expect anything good from the US”, the Islamic Republic News Agency reports.

The envoy touched upon Washington’s policy in the region while he spoke about its actions in Afghanistan at the Islamabad Policy Institute. According to the diplomat, Tehran has doubts about the role of the US anywhere in the world, especially in the war-torn country, adding that peace and stability in Afghanistan cannot occur by militarisation. Speaking about the matter, Hosseini took aim at the recently unveiled “deal of the century”.

“You can also witness the ‘deal of the century' about the Palestinian issue which has directly affected the rights of the Palestinians. This is the worst act that we are witnessing at the moment. Where there is a role of Satan or US we cannot expect anything good from that”, he noted.

He also blamed “the foreign intervention” for the bloodshed in the region and for creating groups like Daesh*, which he claims were deployed to Iraq and Syria. He insisted that his country has been trying to resolve the conflicts in Syria, Iraq, and Yemen with dialogue and advised the nations on countering terrorist groups, in particular with the help of IRGC commander Qasem Soleimani. According to the diplomat, the general visited Baghdad at the invitation of the Iraqi government in an attempt to promote peace and tranquillity in the country.

He called on other states in the region to make efforts to counter foreign meddling, especially by the US. At the same time, he claimed that the Islamic Republic is ready for dialogue with Saudi Arabia, welcoming Pakistani Prime Minister Imran Khan’s efforts to mediate. He pointed to Iran’s President Hassan Rouhani’s proposal to establish a regional cooperation mechanism under the so-called Hormuz Peace Endeavour (HOPE) and lamented the refusal of some countries in the area to cooperate.

“We told Prime Minister Imran Khan during his Iran visit that we are ready to hold dialogue either in Tehran, Riyadh, or in Islamabad but Pakistan has not received a positive response from the other side, however, we have not lost the hope”, Mohammad Ali Hosseini concluded.

‘Deal of the Century’ Rejected by Palestinians

Donald Trump presented the long-touted peace plan for the Middle East, also known as the "deal of the century", and crafted by his son-in-law/aide Jared Kushner, on 28 January. It envisages the creation of a Palestinian state on scattered patches of the West Bank and Gaza Strip, connected by a system of roads, bridges and tunnels with a capital on the outskirts of East Jerusalem, of which the planned state would be granted only a tiny fraction.

At the same time, the Palestinian state's borders would be secured by Israel, rather than by its own forces. The Jewish state, in turn, would receive recognition for all of its West Bank settlements and would have the Jordan Valley at its disposal.

© REUTERS / BRENDAN MCDERMID
Mideast Peace Plan: Trump Unveils His 'Deal of the Century'
The Palestinian Authority rejected the plan, citing perceived US bias in favour of Israel and viewing it as a rejection of all the previously reached accords as well as of international law. It pledged to sever all ties, including cooperation on security, between Israel and the US on the one side and the Palestinians on the other in response.