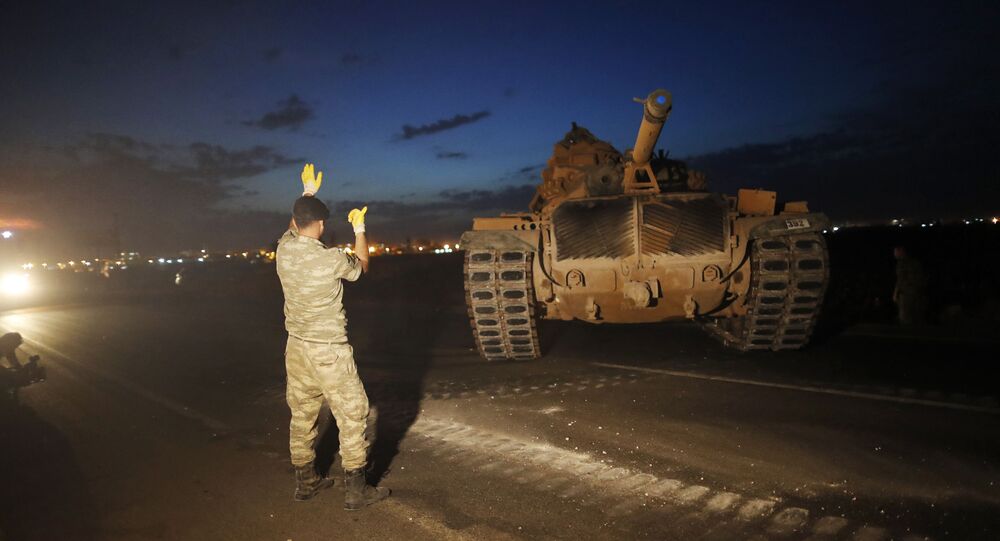 Earlier, amid a major offensive by the Syrian Army which liberated wide swathes of southeastern Idlib province, including a key strategic city, Turkey's Defence Ministry warned that its forces would retaliate "in the strongest way, without hesitation," if its 'observation posts' in the region were attacked.

Turkish President Recep Tayyip Erdogan warned Friday that Ankara may start a military operation in Idlib if the situation in that troubled region was not immediately resolved.

Speaking in Ankara, Erdogan warned that Turkey would be unable to deal with an influx of Syrian refugees who may try to flee to southern Turkey amid the Syrian Army's ongoing campaign against terrorist militias in Idlib.

"If [the situation] in Idlib does not return to normal, we will proceed with action. We sincerely want stability in Syria. The political process must be implemented quickly and fairly. We will not shy away from doing whatever it takes to achieve this, including using military force," Erdogan said.

According to the Turkish president, the situation in Syria was "as important" to Ankara as the situation inside Turkey's own borders. Erdogan also accused "those who support the Syrian regime" of being "committed to continuing the crisis in Syria."

Russian presidential spokesman Dmitry Peskov responded to the Turkish president's comments Friday, rejecting Ankara's insinuation that Moscow had somehow failed to comply with the Sochi Accords on the situation in northern Syria. At the same time, Peskov emphasized that the situation in Idlib, where terrorists continue to be concentrated, is an issue of 'deep concern' for Moscow.

"Russia fully complies with all of its obligations under the Sochi agreements regarding the Idlib zone. At the same time, we regret that the situation there still leaves much to be desired. Unfortunately, this area continues to see the concentration of a large number of terrorists who constantly carry out offensives and aggressive actions against the armed forces of the Syrian Arab Republic, as well as the Russian base in Khmeimim. This is a source of deep concern," Peskov said.

Earlier this week, Syrian troops liberated the city of Maarat al-Numan - a strategic city at the junction of the Hama-Aleppo highway linking Damascus and Aleppo which had been under terrorist occupation since 2012. The Syrian Army began an operation in southeast Idlib in December amid repeated militant attacks on government troops and civilians. A fresh ceasefire was secured earlier this month following negotiations between Russia and Turkey, but the terrorists repeatedly broke the agreement and resumed their attacks, killing at least 40 Syrian servicemen and injuring 80 others last week, prompting Damascus to resume its offensive.

Situated in the country's northwest along the Turkish border, Idlib province has become the last major concentration of various factions of anti-government militias and terrorists, with the Syrian government successfully reestablishing control over most of the rest of the country, excluding the northeastern US-backed Kurdish-controlled territories, with the help of its Russian, Iranian and Hezbollah militia allies. A large portion of the Idlib de-escalation zone remains controlled by Hayat Tahrir al-Sham*, a terrorist group which has rebranded itself several times in recent years, but which in practice acts as al-Qaeda's* Syrian branch. Efforts to liberate Idlib have been complicated by the large number of civilians concentrated in the region, with terrorists accused of using these civilians as human shields.