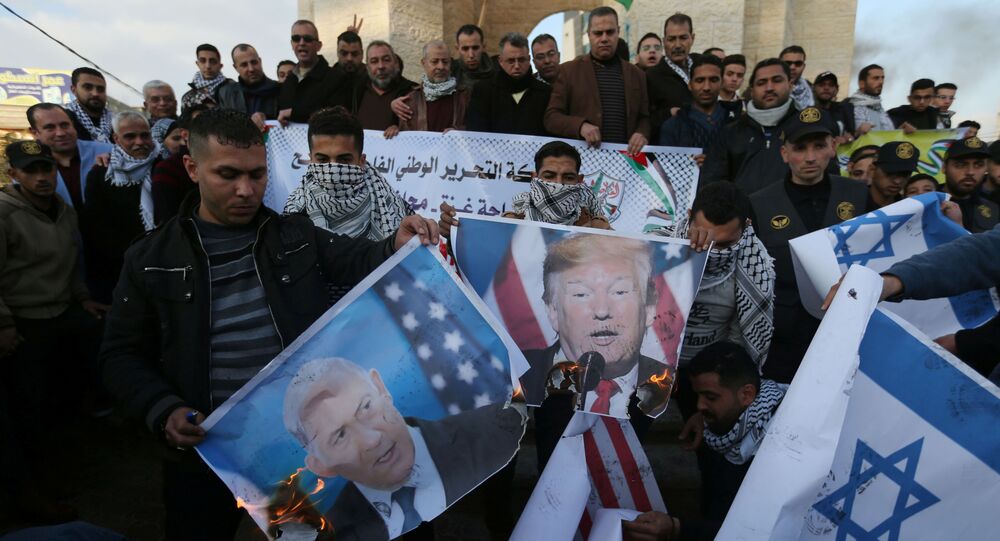 Donald Trump’s peace plan, which was announced on Tuesday, led to a rare show of unity between the two key Palestinian factions: both Hamas and Fatah rejected the proposal, which envisages US recognition of the Palestinian state, albeit one with less autonomy and territory than they claim, as being biased heavily towards Israel.

A senior leader of Hamas, the Palestinian organisation governing the Gaza Strip, has urged Muslim and Arab leaders to reject Donald Trump’s Middle East peace plan and said that all options are now on the table for Palestinians to react.

The head of the Hamas Political Bureau Ismail Haniyeh has sent a letter to the Arab League, the Organisation of Islamic Cooperation and the African Union Commission, according to Iran-based Press TV.

In it, he warned that Palestinians “will never forgive any kind of participation or support” for Trump’s proposals, which favour “Zionist settlers and occupation schemes against the land and the holy sanctuaries”.

"All options have become legitimate for our Palestinian people and their forces in the face of the decisions of this aggressive and unfair deal which targets the Palestinian presence, land, people, history and identity," Haniyeh said.

The conversation was meant to “unify the Palestinian ranks in the face of this aggressive deal” and discuss “joint action” to address it, he noted.

Why did Trump’s plan irk Palestinians?

Hamas had called for the destruction of Israel and establishment of a Palestinian state on its territory from the time it came into existence until 2017, when the militant organisation softened its stance to accept a Palestinian state in the West Bank and the Gaza Strip (rather than the entire territory), but still refused to recognise Israel.

The Trump administration, which earlier made a series of decidedly pro-Israel moves, proposed on Tuesday to grant Palestinians a semi-autonomous state on multiple significant conditions.

Palestinians would have to recognise the State of Israel (something Mahmoud Abbas is willing to do), as well as disarm and subject themselves to Israeli security control. They would obtain a state within at least four years, while Israel would get several immediate benefits.

Under Trump’s plan, Tel Aviv would annex the Jordan Valley, a fertile stretch of land that borders the Kingdom of Jordan and is home to 65,000 Palestinians, as well as all Jewish settlements in the West Bank and East Jerusalem, and the stretches of land connecting them. This would effectively create a fractured, non-contiguous Palestinian state making up just about 70 percent of the current West Bank, compared with 94–96 percent proposed by Bill Clinton.

Israel would also face no international sanctions over its settlements, which are considered illegal under international law, but would freeze their construction for at least four years. In exchange, Palestinians would receive $50 billion in investment funds.

Although Palestinian leaders in both the Gaza Strip and the West Bank condemned the plan (Abbas called it a “slap of the century”), Israeli Prime Minister Benjamin Netanyahu indicated he wouldn’t wait for a peace deal with Palestinians and would go ahead with the Jordan Valley annexation. He said he would bring up the matter for a vote at a cabinet meeting on Sunday.

Netanyahu’s main rival Benny Gantz, who tied with him in the previous two elections last year, also promised to annex the strategically important valley if he becomes the Prime Minister.

Jared Kushner, Donald Trump’s son-in-law and adviser who co-authored the plan, said the US wouldn’t support the annexation until after the 2 March general election in Israel, so the future of the Palestinian land remains unclear.