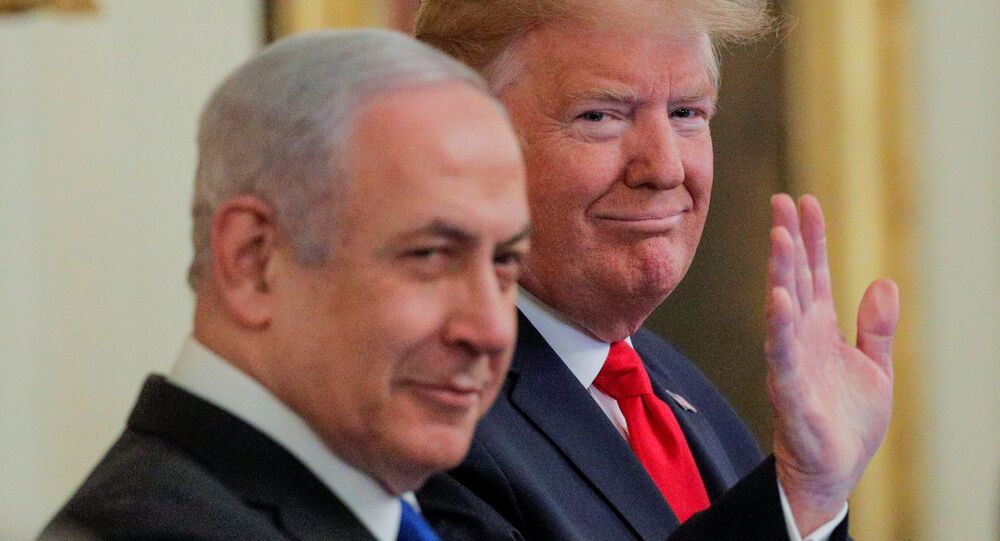 The announcement comes after Trump met with Israeli Prime Minister Benjamin Netanyahu and his main political rival Benjamin ‘Benny’ Gantz. The Palestinian authorities have repeatedly objected to the plan, as its details were trickling out, and mass protests are expected in the Palestinian territories as Israel tightens security measures.

US President Donald Trump has unveiled his long-anticipated Middle East plan – effectively his administration’s vision for the resolution of the Israeli-Palestinian conflict.

Trump said that under his plan Jerusalem will remain Israel's 'undivided' capital.

Israel's West Bank settlements would be recognised by the United States.

However, Israel would freeze the construction of new settlements on Palestinian territories for four years while Palestinian statehood is negotiated. Trump said that the US will open an embassy to Palestine in East Jerusalem.

The US president said that his Palestine-Israel map would "more than double" the Palestinian territory.

"I want this deal to be a great deal for the Palestinians, it has to be. Today’s agreement is a historic opportunity for the Palestinians to finally achieve an independent state of their own," Trump said. "These maps will more than double Palestinian territory and provide a Palestinian capital in Eastern Jerusalem where America will proudly open its embassy."

He added that the US and Israel would create a committee to implement the proposed peace plan.

"My vision presents a win-win opportunity for both sides, a realistic two-state solution that resolves the risk of Palestinian statehood to Israel's security," Trump said during a press conference.

On Monday, Donald Trump held separate meetings with Israeli Prime Minister Netanyahu and opposition leader Benny Gantz. Neither of the two managed to achieve a decisive victory in general elections in April or September last year, and a third vote is scheduled for March to break the impasse.

Benny Gantz, the leader of the centre-right Blue and White alliance, praised Trump’s plan following Monday’s meeting in Washington and promised to put it into practice if he wins the March election. Netanyahu has not commented publicly on it yet.

There has been some speculation in the media that Trump wants Netanyahu and Gantz to work together toward implementing the plan.

No Palestinians at the table

Trump had not met with any Palestinian representatives prior to the announcement; Palestinian National Authority President Mahmoud Abbas had reportedly turned down several offers to discuss the proposal.

Palestinian leaders in the West Bank and Gaza have called for mass protests against the peace plan, prompting the Israeli military to reinforce troops in the Jordan Valley.

President Abbas reportedly greenlighted a “Day of Rage” over the Trump plan on Wednesday, paving the way for violent clashes between protesters and Israeli forces. He is currently holding an emergency meeting of the executive bodies of the Palestine Liberation Organisation and the Fatah party.

Palestinians have also floated the possibility of quitting the Oslo accords, which created the Palestinian Authority and regulate its relations with the state of Israel.

The Oslo accords, signed in the 1990s, officially created the Palestinian Authority as a structure tasked with exercising self-governance over the territories of the West Bank and the Gaza Strip.

A long path behind

Trump has largely outsourced the creation of the plan to his adviser and son-in-law Jared Kushner. The initial idea was to publish it after the April 2019 election in Israel, but the uncertainty hanging over the Knesset over the past year has delayed the announcement.

Jared Kushner unveiled the economic portion of the plan this past summer at a conference in Bahrain, but failed to shore up support from Palestinians and faced widespread condemnation instead.

Israelis and Palestinians have been embroiled in a conflict ever since the State of Israel came into existence. Previous American administrations, in line with the United Nations’s approach, had long favoured an arrangement that envisaged an independent Palestinian state in the West Bank and the Gaza Strip, with its capital in East Jerusalem.

The Trump administration reversed that policy and made a series of decidedly pro-Israel moves in the past three years. Those included moving the US embassy from Tel Aviv to Jerusalem and recognising the Golan Heights (which it annexed illegally from Syria) and Israeli settlements in the West Bank (illegal under international law) as parts of Israel.