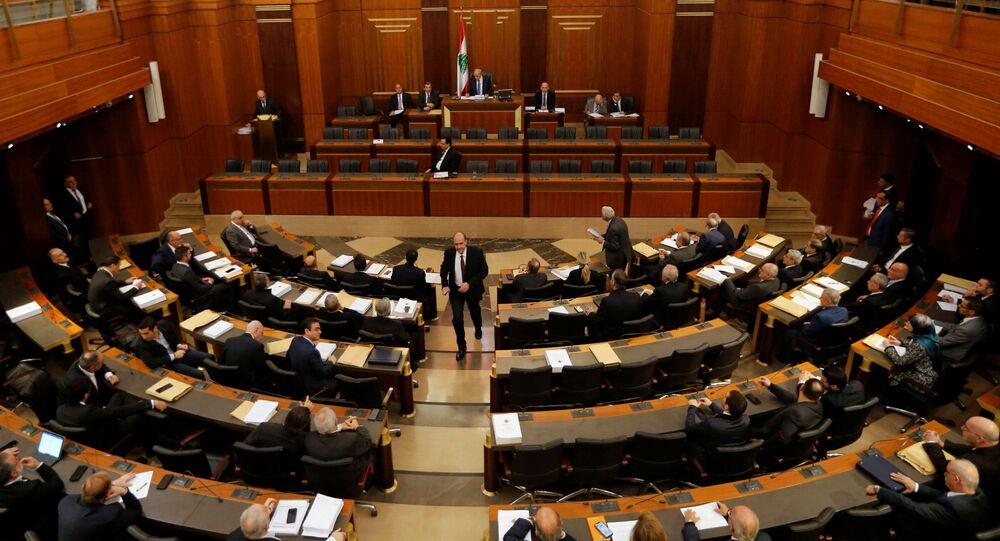 BEIRUT (Sputnik) - The Lebanese parliament has voted the 2020 budget bill into law, the Lebanese Broadcasting Corporation (LBC) reported on Monday.

The bill was adopted by a majority of 49 votes, with 13 lawmakers voting against the bill, and eight other abstaining from the vote, according to the broadcaster.

Earlier in the day, Prime Minister Hassan Diab said that the new government of Lebanon would not recall the 2020 budget bill, introduced to the parliament by the previous government.

On 21 January, Lebanon announced the formation of a new cabinet under prime minister Diab and President Michel Aoun.

The previous government of Saad Hariri, consisting of 30 ministers, resigned in late October amid large-scale anti-government protests triggered by an economic crisis. The country’s new cabinet consists of 20 ministers, including five women. Zeina Akar has become the first female Minister of Defence in Lebanon. She will also serve as the country's Deputy Prime Minister.

© AP Photo / Hussein Malla
Demonstrations Start in Lebanon After New Cabinet Announced
Mass protests have engulfed Lebanon since October. People have been demanding urgent reforms to end the deepening liquidity crisis, which the country’s president has blamed on the US sanctions. The resignation of Hariri's government in late-October failed to remove people from the streets. In absence of a new cabinet ever since, the Lebanese watch their national currency continue plummeting against the US dollar, having lost more than 60 percent of its value so far.
...
Reddit
Google+
Blogger
Pinterest
StumbleUpon
Telegram
WhatsApp
10
Tags:
Michel Aoun, bill, budget, Parliament, Lebanon
Community standardsDiscussion
Comment via SputnikComment via Facebook