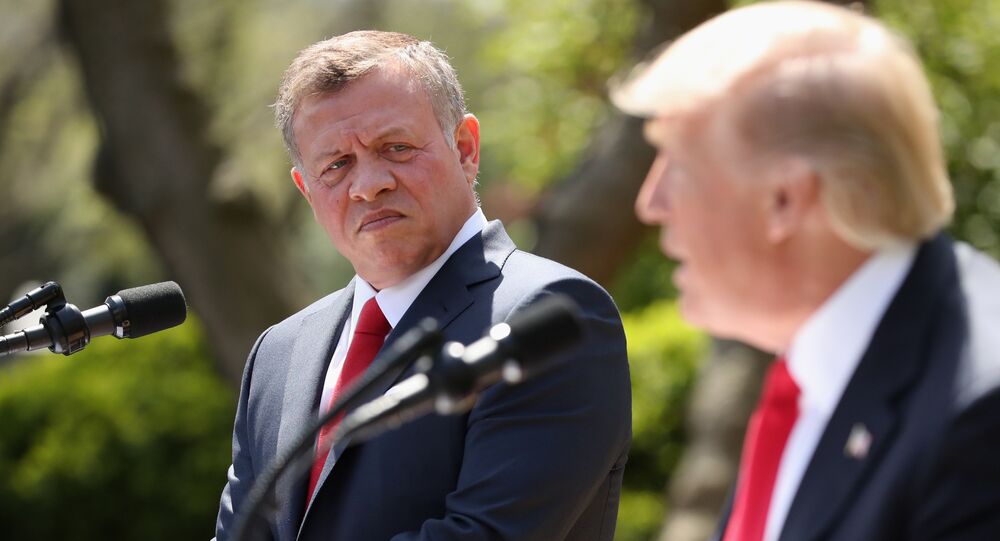 ‘Not at Our Expense’: Jordan’s King Reportedly Slams Trump’s ‘Peace Plan’ Ahead of Its Release

As US President Donald Trump is currently preparing to unveil his long-awaited peace plan for the Israeli-Palestinian conflict during a meeting with Benjamin Netanyahu and Benny Gantz in Washington this week, several officials from Arab states have already voiced their opposition to the project.

Jordan’s King Abdullah II has publicly spoken against Donald Trump’s “Deal of the Century” aiming to settle the Israeli-Palestinian conflict, saying proposals that come at his country’s “expense” would be rejected, Israeli channel Kan 11 News reported.

“Our position is perfectly well-known. We will not accept proposals that come at our expense”, King Abdullah II reportedly said on Sunday during a conference in Jordanian’s Aqaba city.

Meanwhile, Kan 11 News argued  that some officials in Gulf states were not rejecting Trump’s plan outright, even if it does not potentially include the creation of a Palestinian state along pre-1967 borders, stressing that it was time to “hear new ideas” now.

Trump’s “Deal of the Century”

The US president is planning to unveil his long-expected Israeli-Palestinian peace plan this week during a meeting with Israeli Prime Minister Benjamin Netanyahu and his political rival from the “Blue and White” party Benny Gantz, who arrived in Washington on Sunday. Little is known so far about the plan’s contents, apart from the economic portion suggesting massive investments in the Palestinian National Authority, including potential investments from the economies of regional powers.

It is unclear so far whether the plan will include a provision to create a Palestinian state according the region’s pre-1967 borders, but some reports and leaks to the media suggest that the deal could consolidate Israel’s control over one-third of the West Bank settlements, as well as to establish an army-less Palestinian state, however these claims have yet to be confirmed.

So far, the deal has been denounced by officials from the Palestinian Authority (PA), including a diplomat Saeb Erekat, who reportedly slammed the plan as something that would potentially endorse the Palestinian territory’s “permanent occupation”.

Jordan and Egypt are the only two Arab states that have peace treaties with Israel, but according to King Abdullah II’s November remarks, Jordanian-Israeli relations are now at their lowest, following Netanyahu’s pledges to annex the Jordan Valley.

© REUTERS / AMMAR AWAD
Gantz Calls for Jordan Valley Annexation, 'Hopes Trump Releases Peace Plan Soon'
There are many Jordanians of Palestinian origin, as many resided within the Kingdom in the aftermath of the Arab-Israeli Six-Day War in 1967 and many are still considered refugees. There have been increased calls for Jordan to create a confederation with the PA or recognise the Kingdom as a Palestinian state, but they have been repeatedly rejected by King Abdullah II who stressed to the Jordanian Parliament in 2014 that “Jordan is Jordan” and “Palestine is Palestine”, while also supporting a two-state solution to the Israeli-Palestinian conflict.
...
Reddit
Google+
Blogger
Pinterest
StumbleUpon
Telegram
WhatsApp
227
Tags:
Benny Gantz, Saeb Erekat, Israeli-Palestinian conflict, King Abdullah II, Donald Trump, Palestinian Authority, Israel, Jordan
Community standardsDiscussion