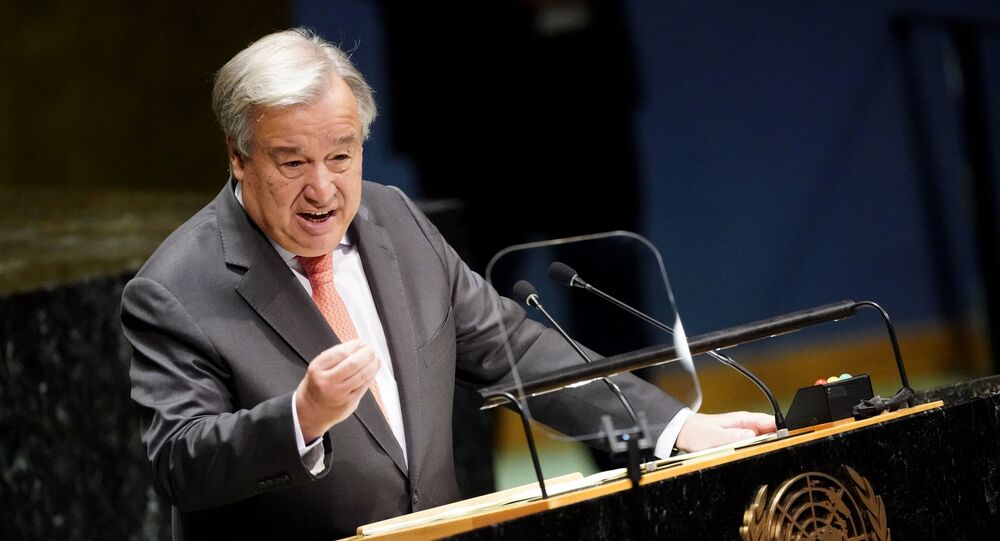 UNITED NATIONS (Sputnik) - UN Secretary General Antonio Guterres hopes his presence at the international conference on Libya in Berlin over the weekend will help end foreign interference in that country’s war and bolster peace negotiations between warring parties, spokesman Stephane Dujarric said during a press briefing.

"The secretary-general will be heading off to Berlin today to attend the Berlin Conference on Sunday being organized by the Germans," Dujarric told reporters on Friday. "What we hope comes out of Berlin is a renewed demonstration of international unity in supporting the intra-Libyan political process, ending foreign interference, leading to full respect for the UN arms embargo."

The latest of over a half dozen Libyan peace conferences will attempt to break a deadlock between the nation’s internationally recognized Government of National Accord (GNA) and the rebel Libyan National Army (LNA), led by Gen. Khalifa Haftar.

For the past nine months Haftar’s LNA have laid siege to the GNA in Tripoli in fighting that has killed hundreds of civilians, thousands of fighters and displaced thousands of people. Haftar’s advance, however, has been stalled on the outskirts of the capital for months.

Both Haftar and GNA leader Fayez Sarraj are expected to attend the conference in Berlin, according to the latest media reports.

The GNA is backed by Turkey and Qatar, while Haftar, who backs a rival administration in Libya’s east, has the support of neighboring Egypt, as well as Russia and the United Arab Emirates.

Libya has been locked in a civil war between rival armed groups since the 2011 overthrow of longtime ruler Muammar Gaddafi by US- and EU-supported Islamic extremists.

Also at Friday's press briefing, Dujarric called for the immediate release of Siham Sergewa, an elected member of the House of Representatives, who was seized from her home in Benghazi at night six months ago. Since Sergewa’s violent abduction, her fate remains unknown, Dujarric said.

‘Playing the Libya Card’: Turkey’s Erdogan Gambles on Foreign Adventure to ‘Save His Rule’