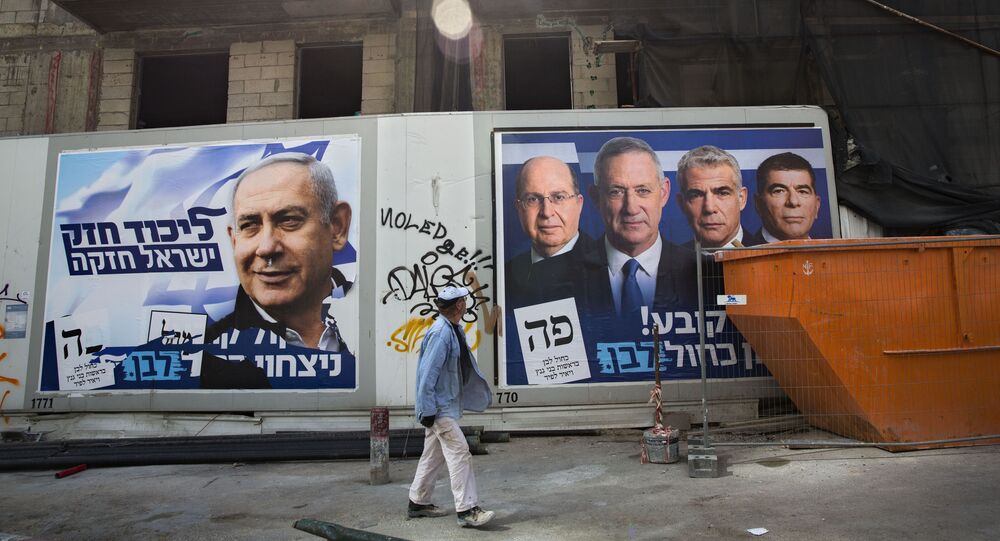 With the third round of elections less than two months away, Israel's political map has remained largely unchanged. While the right-wing camp is still struggling to remain in power, the left is determined to launch an overhaul and remove PM Netanyahu from office.

30 lists will take part in Israel's upcoming elections, scheduled for early March, a significant drop from the first round in April 2019, when 47 lists were competing.

The parties' lists - that were submitted last night - are now final and cannot be changed. However, parties can still decide to remove themselves at the last minute.

Many are not expected to pass the relatively low threshold that stands at 3.25 percent, but those who do will need to divide the 120-seat Israeli parliament between them.

The number of seats a party receives in the Knesset will be proportionate to the number of votes it gets in the general vote.

Here are the main parties that will go head-to-head in March:

Established in 1973, it initially included several moderate right-wing parties that merged into one in 1988.

© AFP 2021 / HAZEM BADER
There is Possibility that the Results of the April Elections in Israel Will Be Repeated - Candidate
In regional politics, the party has always pushed for the notion of Greater Israel (that includes the West Bank and Gaza as part of the Jewish state) and denied the Palestinians their right to statehood. Over the years, this stance has undergone a metamorphosis and Israel under Likud has led several peace initiatives, including an agreement with Egypt in 1979 and the withdrawal from the Gaza Strip in 2005.

Regarding the economy, Likud has raised the free-market banner and over the years has initiated several related reforms. During Netanyahu's first tenure as prime minister in 1996, many sectors that were previously run by the government were opened to private companies. Likud has also worked to lower prices on many goods and services by opening the market to competition.

This list is located to the right of Likud and is comprised of three religious parties. Their common denominator is their objection to the establishment of a Palestinian state and a rejection of judicial activism that presupposes the ability of the judiciary to interfere in the country's political decisions.

Another right-wing party, located to the right of Yamina. It is headed by Itamar Ben Gvir, a notorious lawyer known for representing settlers in their claims against the Palestinians and for his staunch support for Kach, a radical ultranationalist party that was outlawed in Israel in 1994. Often labelled as a fascist, Ben Gvir has been slammed for decorating his bureau with a photo of Baruch Goldstein, the man who murdered 29 Muslim worshippers at the Cave of Patriarchs in Hebron in 1994, a photo that he claims he had removed.

A right-wing religious list that combines two parties and that caters primarily to the needs of its voters - Israel's Orthodox Jewish population. Their goals include getting social benefits for large families, exemption from military service for boys studying in religious institutions, and maintaining the status quo on issues concerning religion versus the state (i.e. marriage, divorce, and burial).

Although just like Likud, they support the idea of Greater Israel, but the list backed Israel's unanimous withdrawal from Gaza in 2005.

Established in 1984 by religious Sephardic Jews who felt they were being discriminated against by the Ashkenazi elite, the party supports social justice and pushes for a series of economic reforms designed to help Israel's weaker population.

Even though it brands itself as a right-wing party, it is also open for negotiations with Israel's Arab neighbours. However, it rejects the idea of splitting Jerusalem.

Created in 2019, it comprises of three parties and lists three former chiefs of staff. Although it positions itself in the centre, critics often say the Blue and White is not different from Likud.

© AFP 2021 / GALI TIBBON
Israel's Knesset Dissolves, Election Set for 2 March 2020
Just like their main competitor, the Blue and White party also considers Iran to be an existential threat to the Jewish state. Hezbollah, a Shiite militia aligned with the Islamic Republic, is also a major concern for them, just as is the case with Hamas, a militant group in the Gaza Strip that has been challenging Israel's southern communities since 2001.

Just like Likud, the Blue and White also wants to keep the already existing settlements in the West Bank and make sure that if a Palestinian state is ever established, it will not be armed.

The list unites parties that in other circumstances would never think they could run together. While Meretz is known for its left-wing views, including support for an end to Israel's occupation of Palestinian territory, Gesher, whcih was established by Orly Levy Abecasis, one of the former key players of Avigdor Lieberman's Yisrael Beitenu party, is known for her hawkish stance.

Now, however, they seem to have put their differences aside and united in pursuing one goal - the removal of Netanyahu from power.

Caught in the Middle:

Established in 1999 by Avigdor Lieberman, a man who later headed Israel's Foreign and Defence Ministries, the party initially catered only to the needs of immigrants from the former Soviet states. In 2003, however, it started speaking to the broader audience, predominately targeting Israel's secular population.
The party supports hawkish ideas, but at the same time, it doesn't reject the concept of a Palestinian state. Instead, it believes Israel should implement a policy of land and population swaps.

This list includes four Arab parties that despite significant differences between them managed to form a joint list in 2015. The parties have already said that they will support neither Benjamin Netanyahu nor Benny Gantz for the prime ministership. However, they are willing to turn a blind eye to Gantz if he wins the race.

© REUTERS / Baz Ratner
Israel May Be Heading for 3rd Election With Gantz Unlikely to End Deadlock in Gov’t Talks
The list is vocal when it comes to Palestinian rights and works to improve the situation for the Arab minority in Israel.

According to a recent poll, the Blue and White party is still leading with 34 seats, while Likud is falling two seats behind. The Joint Arab List is projected to become Israel's third-largest party with 13 seats, whereas the union of Labour-Gesher-Meretz is set to receive ten seats.

The same poll also suggests that religious parties will get some 16 seats in total, whereas Lieberman's Yisrael Beitenu is expected to receive eight seats.