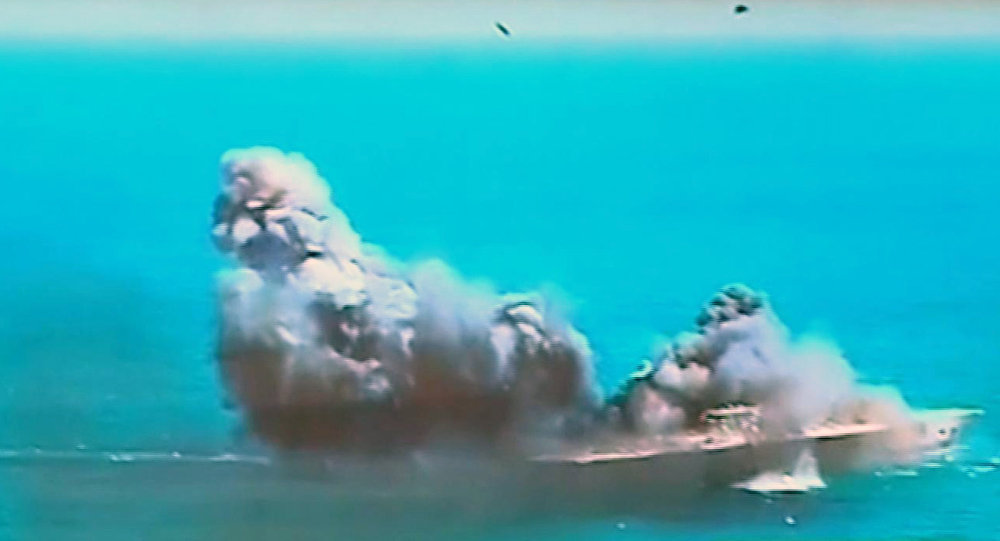 Judging by recent satellite photos, Iran seems to be preparing a mock-up carrier, modeled to look like the US Navy’s Nimitz-class ships, for some more target practice.

With a US carrier battle group off the coast and Washington a hair’s breadth from attacking, Iran’s military has begun preparing for a little target practice using a barge built to look like an aircraft carrier.

Photos from satellite imaging company Planet Labs provided to Defense One on Wednesday show the “carrier,” which was heavily damaged in a February 2015 turkey shoot, has been patched up, repainted and even has mock aircraft on its flight deck.

Iran Is Getting Ready to Blow Up Its Fake Aircraft Carrier, Again https://t.co/9pPTdh2FdV pic.twitter.com/UnXntgJdij

​Bryan Clark, a former special assistant to the US Navy and currently a senior fellow at the Center for Strategic and Budgetary Assessments, told Defense One the mock carrier might feature in anticipated military exercises in March, which is the end of the Persian calendar year.

Clark noted the drills are more than just bravado: they enable the Iranian military to test targeting the vital parts of the massive ship, which is nearly 1,100 feet long.

“A carrier is obviously very big. To attack it with cruise missiles, you have to be able to hit the right aim point,” Clark said. “Otherwise you will just cause fires. You won’t sink it.”

The Iranian military has some powerful cruise missiles, too. Versions of the Noor anti-ship missile, reverse-engineered from the Chinese YJ-8, can have ranges between 80 and 120 miles, and the Hormoz 2 missile has a range of 186 miles. Iran also has the Zolfaghar anti-ship ballistic missile, which is named after the sword “spine cleaver” that belonged to Shia Islam founder Ali ibn abi-Talib and has a purported range of 435 miles.

Other uses for the ersatz carrier might include practicing a swarming attack with the host of smaller patrol boats fielded by the Iranian Navy and the naval wing of the Islamic Revolutionary Guards Corps, Clark noted.

The mock carrier was first built at the Gachin shipyard near the Hormuz Strait city of Bandar Abbas in 2014, according to the Washington Post, which noted Tehran initially claimed the ship was to serve as the set of a film about the 1988 downing of Iran Air Flight 655, a passenger jet shot down by the USS Vincennes in the Persian Gulf, in which 290 people were killed.