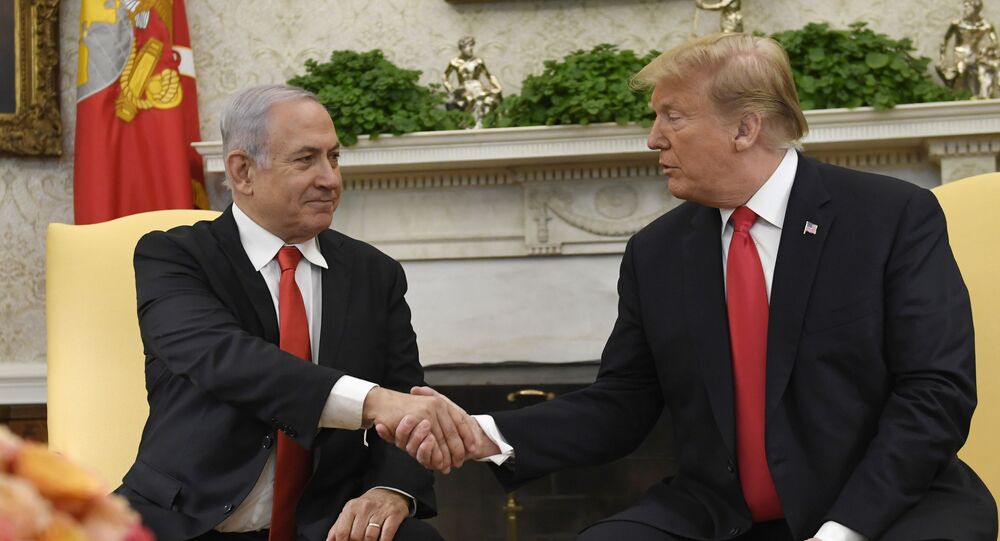 Iranian Quds Force commander Qasem Soleimani was killed as a result of a US airstrike near Baghdad International Airport on 3 January. Washington justified the killing by claiming that he had prepared attacks against American personnel in Iraq. Tehran has retaliated for the general's murder by launching dozens of missiles at US bases in Iraq.

Reiterating his earlier support for Washington's actions in Iraq, Israeli Prime Minister Benjamin Netanyahu has stated that the US should be thanked for acting "swiftly, boldly, and resolutely", when it decided to kill Islamic Revolutionary Guard Corps (IRGC) general and commander of the Quds Forces, Qasem Soleimani. Netanyahu further stated that the Jewish State "stands completely" beside the US regarding this episode.

The Israeli prime minister previously stated on 5 January that US President Donald Trump was "worthy of all appreciation" for ordering the assassination of Iranian Quds Force leader Qasem Soleimani. He argued that the man was allegedly responsible for planning and carrying out "many terror attacks" in the Middle East and beyond.

Soleimani, who was believed to be one of the most powerful figures in Iran, was killed in a US airstrike as he was travelling from Baghdad International Airport on 3 January along with two prominent members of the Iraqi militia Popular Mobilisation Forces. Washington claimed that the strike was ordered by Trump with aim of defending American diplomatic personnel in Iraq, who were allegedly targeted by Soleimani and his Quds Force.

The assassination was harshly condemned by Iranian officials with the country's President Hassan Rouhani and Supreme Leader Ali Khamenei both vowing to avenge Soleimani's death. Iraq too slammed the US airstrike, passing a motion in the parliament to expel all foreign military presence from the country following the killing of the Iranian Quds Force leader.

Tehran's retaliation came early on 8 January as the country launched dozens of missiles at US military bases located in Iraq. The Iraqi military reported that 17 missiles fell on Ayn al-Asad Air Base, utilised by US forces, and five more on US-led coalition headquarters in the city of Erbil. Iranian state TV said 80 US soldiers were killed in the attack. Washington is yet to report on the casualties, but President Donald Trump tweeted that "all is well" adding that casualties and damages are being estimated.