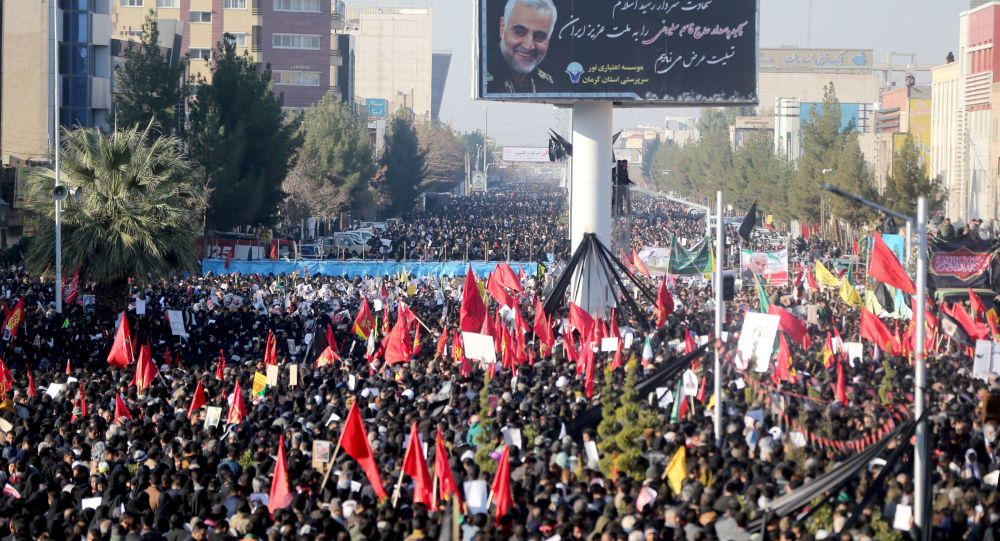 Thousands poured into the streets of Kerman, the home town of Quds Force commander Qasem Soleimani, this Tuesday to witness the funeral procession of the Iranian IRGC major general, who was killed in a US drone strike on 3 January.

A stampede at the funeral for slain Iranian military commander Qasem Soleimani in his hometown of Kerman claimed more than 50 lives on Tuesday, the ISNA news agency reported.

The number of those injured has not been revised. The head of Iran’s medical emergency services said earlier in the day that 40 people died and 213 were hurt in the stampede that happened as thousands packed the streets ahead of the Quds force commander’s burial.

"Unfortunately, as a result of the stampede, some of our compatriots have been injured and some have been killed during the funeral processions," he said.

He added that the situation was being looked into with additional information to be provided later.

The Monday procession that was held in the capital of Iran, Tehran, gathered over one million people.

The killing prompted Iranian President Hassan Rouhani to warn that Tehran will take revenge for what it views to be a heinous crime.

© REUTERS / Marco Bello
Journalist: Trump 'Could Lose' US Presidential Election Due to Iran Affair
Two days after the assassination, Tehran stated that it would continue to reduce its obligations under the Joint Comprehensive Plan of Action (JCPOA) nuclear deal, and proceed to enrich uranium based on the technical requirements of its nuclear industry.

Baghdad has also condemned the attack as a violation of Iraqi sovereignty, with the national parliament voting to expel foreign troops from the country.