Earlier in the day, three separate incidents took place in which rockets were fired in the Iraqi capital of Baghdad, reportedly injuring at least five people as the Pentagon has purportedly continued attacking certain Iraqi military installations.

An airstrike on the Iraqi-Syrian border and inside Syrian territory was reported by Al-Mayadeen, citing sources that claimed that forces deployed at the border posted a security alert.

​Local media claim, citing sources, that the most recent airstrikes have targeted installations of Iraq's Kataeb Hezbollah militia in Al-Qaim region on the Iraqi-Syrian border.

​Unconfirmed reports claim that at least 5 people were killed in the US strike targeting "Imam Ali" military base.

​The region is reportedly known to host Iranian-backed militia forces. There has been no confirmation of the attack. The US Department of Defence has not issued a statement. 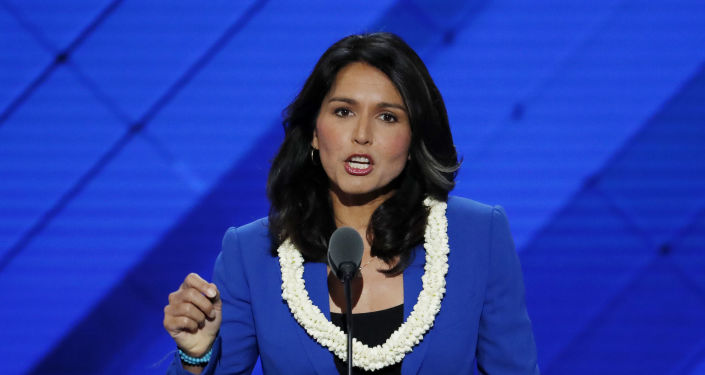 © AP Photo / J. Scott Applewhite
Gabbard Blasts Trump Over Soleimani Killing, Demands Immediate Pullout of US Troops From Iraq, Syria
The airstrike comes on the heels of previous attacks on Saturday that were reportedly carried out by US forces in Iraq, targeting various military installations of the local militia.

The series of reported US air raids against Iranian-backed militia in Iraq falls against a backdrop of the dangerous escalation in Iran-US relations after the Iran Revolutionary Guard Corps (IRGC) Quds Force commander, Qasem Soleimani, was assassinated on Friday in a US drone attack near the Baghdad International Airport.