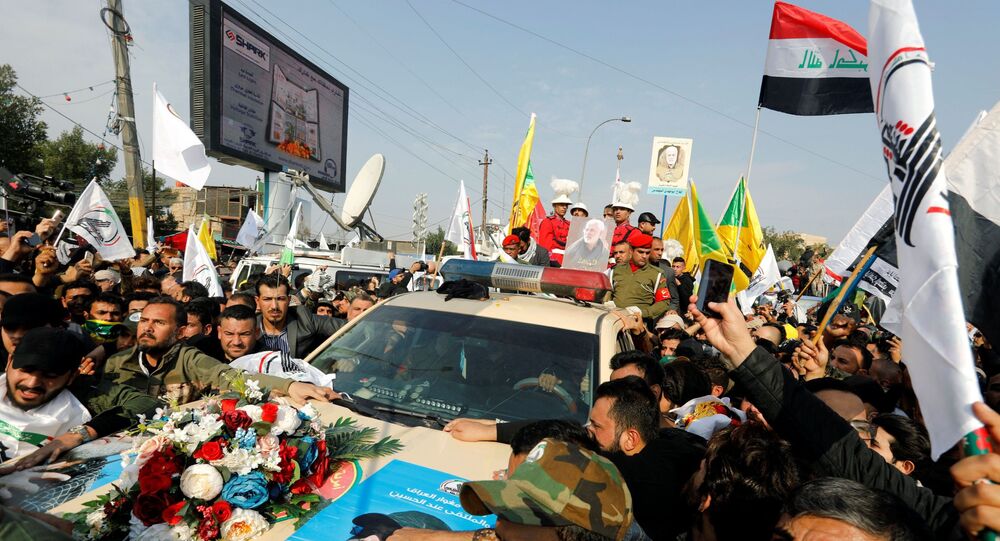 CAIRO (Sputnik) - Thousands have gathered in the Iraqi capital of Baghdad ahead of the funeral ceremony for Iran’s military commander Qasem Soleimani and Abu Mahdi al-Muhandis, the deputy head of the Iraqi Shiite militia Popular Mobilization Forces (PMF), media reported on Saturday.

Coffin with al-Muhandis’s body is draped in the Iraqi national flag, while people shout anti-US slogans, according to Al-Jazeera. The broadcaster added that the Iraqi commanders would most likely be buried later on Saturday.

​Mourners lined the streets of Baghdad, some of them dressed in black and crying. They chanted ‘death to America, death to Israel’ and ‘no, no America’ as the procession moved along the streets.

Mourners surround a car carrying the coffin of Iranian military commander Qasem Soleimani, killed alongside Iraqi paramilitary chief Abu Mahdi al-Muhandis in a US air strike, during a funeral procession in Kadhimiya, a Shiite pilgrimage district of Baghdad, on Saturday pic.twitter.com/21JoqKXzin

​Iranian media outlets reported that Soleimani’s body would be transferred to Iran for the burial ceremony next week.

​In the early hours of Friday, Soleimani and al-Muhandis, along with 10 others, were killed by a US drone attack near the Baghdad International Airport. US President Donald Trump said Washington took preemptive action against Soleimani to "stop a war."

Iranian leaders, however, vowed to take revenge for Soleimani’s assassination.