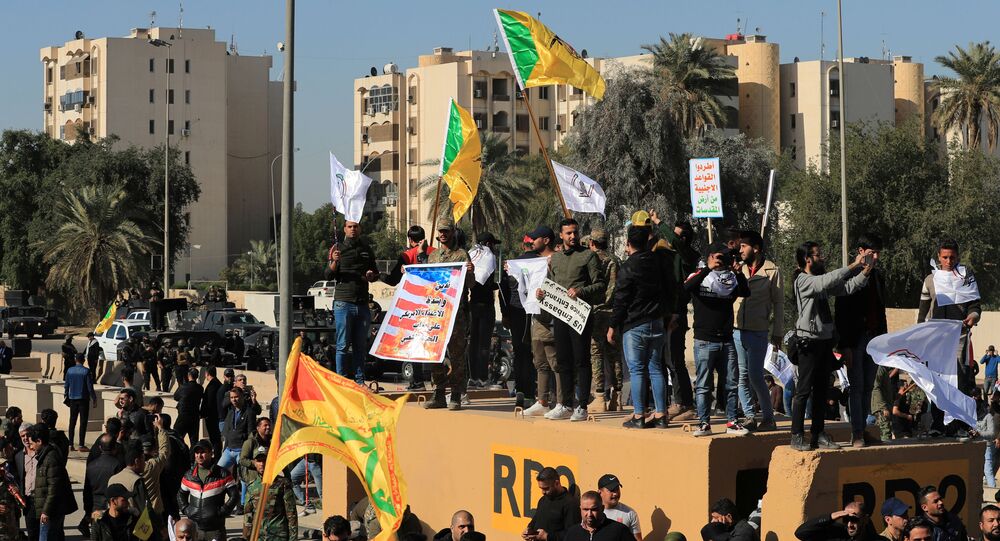 The American Embassy in Iraq came under attack on 31 December by a group of people protesting against recent US airstrikes on alleged Kata'ib Hezbollah bases in Iraq that claimed lives of at least 25 people.

Iranian Foreign Ministry spokesman Abbas Mousavi has lambasted the "bogus" US accusations against the Islamic Republic in the wake of President Donald Trump blaming the country for allegedly organising an attack on the US Embassy in Iraq on New Year’s Eve. He added that such allegations are an insult to the Iraqi people who protested against US actions in the country.

"The surprising impudence of the American authorities is at such a level that after slaughtering at least 25 people, wounding many Iraqi people, inflicting financial damages on Iraq and violating the country’s national sovereignty and territorial integrity, they are now blaming Iran for the protests from the Iraqi people against their own ferocious measures in a blatant and cheap act of pinning the blame on others ", Mousavi said.

The foreign ministry's spokesman further slammed the US for ignoring the "Iraqi nation’s liberality and pursuit of independence" as they plan their actions in the country, which, as Mousavi said, still deems Americans as "occupiers". The spokesman cautioned Washington against making the same mistake in the future and called on the US to reconsider its "destructive policies" in the region.

In response to US airstrikes against alleged positions of Kata'ib Hezbollah, a militant group that participated in the liberation of Iraq from Daesh*, in Iraq and Syria, numerous protesters gathered around the American Embassy in Baghdad on 31 December. At some point the protesters manged to set a perimeter fence on fire, but did not breach the actual premises.

While Iraqi officials have promised to enhance the security of the building, the US announced it will soon redeploy 750 troops to the region to help secure American personnel. US President Donald Trump also accused Iran of organising the protests and threatened that it will pay "a very big price" for its alleged actions.

Iran vehemently rejected the accusations calling them "empty" and cautioning Washington against making such statements in the future.