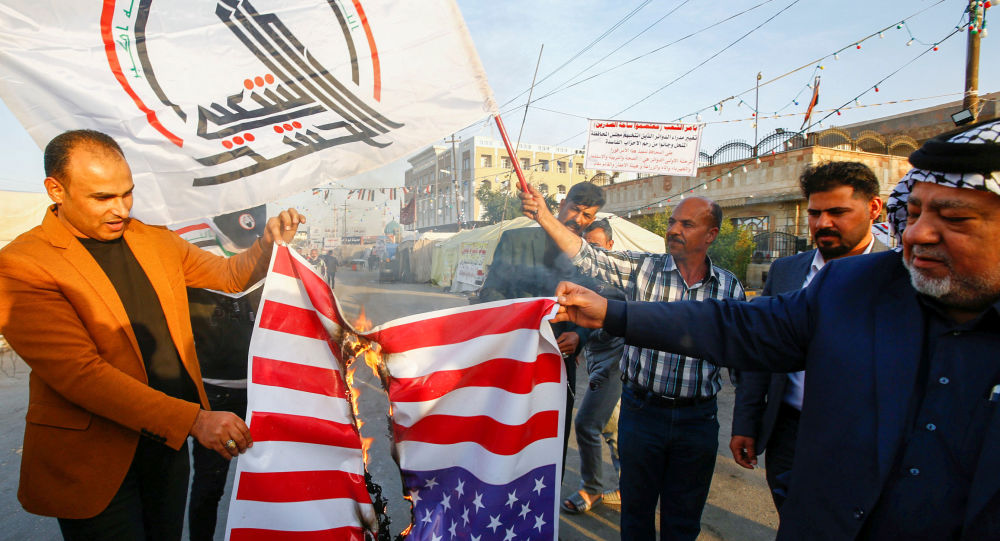 BAGHDAD (Sputnik) - The Pentagon claimed earlier it had carried out "defensive strikes" against five Kata'ib Hezbollah facilities in Iraq and Syria in an alleged response to a rocket attack on Friday that killed a US contractor at a Kirkuk base north of Baghdad.

The airstrike by the United States on Shiite militias is a violation of Iraqi sovereignty and might provoke Baghdad to revise its attitude toward the international coalition, the Iraqi National Security Council said in a statement on Monday.

"The Iraqi government condemns these actions and considers them a violation of the sovereignty of Iraq and a serious abuse of the working norms of the international coalition forces, including American troops, who are single-handedly conducting operations without the consent of the Iraqi government", the statement said.

The council said the US acted out of its own interests and conclusions, undermining Iraq’s priorities.

"This attack, contrary to the goals and principles for which the international coalition was created, is pushing Iraq to revise its relations [with the coalition] and working methods in legal and political aspects and in terms of security, in order to protect the sovereignty of the country, its security, the lives of citizens and strengthen mutual interests", the statement stressed.

© Photo : Babak Taghvaee/twitter
US Military Releases First Footage of Airstrikes Against Iraqi Militia - Video
A senior State Department official said during a briefing on Monday that Iraq’s authorities have not done enough to protect US troops stationed there and called their lack of condemnation of pro-Iranian militia blamed for a series of attacks on US forces - disappointing. The State Department official also expressed disappointment over Iraqi criticism, adding that the United States does not have "any fear" of a possible backlash against its actions.

The Popular Mobilization Forces, an umbrella group of Iran-backed Shia militias in Iraq that includes Kata'ib Hezbollah, said that 25 fighters were killed and 51 others injured in the US attack.

Since 2014, the US-led international coalition has been conducting military operations in Syria and Iraq against the Daesh* terror group, while in Syria the coalition acts without the official consent of Damascus.