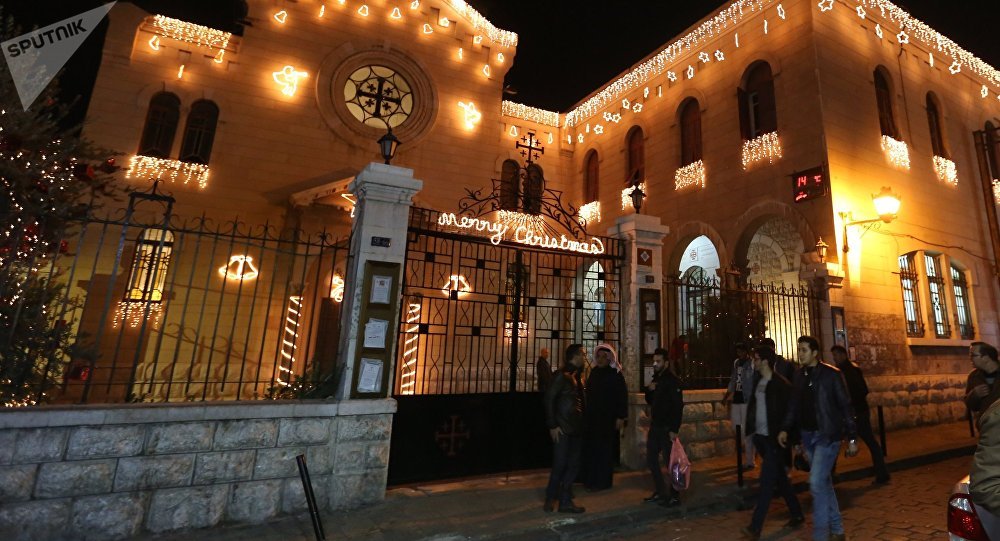 Christmas in Damascus: See How One of World’s Oldest Cities Prepares for Key Christian Holiday

Christians make up about one tenth of Syria’s total population, and are subdivided into over half-a-dozen denominations, part of the rich tapestry of Syrian society which only a few years ago was threatened by war and destruction.

The Syrian capital’s preparations for the Christmas holiday, including the traditional lighting of a large festive tree at one of the city’s central squares, has caught the attention of amateur reporters.

Midnight walk around the boulevard literally took my breath away. like wow.

This is such a beautiful sight and a great addition to the architecture and spirit of Damascus. An old abandoned building turned into an elegant boutique hotel reliving the architectural style of one of the city’s architects in the past. And now beautiful Christmas decorations. pic.twitter.com/bj81pUMMwy

Photos and videos taken in the city in recent days show the Christian community’s efforts to get into the spirit of the season, including bright and colourful light displays, parades, carnivals and fireworks, and Santa hats galore.

The Iraqi Christian Foundation, a US-based non-profit providing humanitarian aid to Christians displaced by the terrorism and foreign-intervention-fuelled conflicts in Iraq and Syria, pointed out that just a few years ago, the fate of Syria’s pre-war population of over 1.2 million Christians was uncertain.

“Under President Obama’s administration, with help from Joe Biden [and] Hillary Clinton, the US/West spent billions to fund jihadists to destroy Syria and target Syrian Christians. Thankfully the evil plan eventually failed and instead we see beautiful scenes of Christians preparing for Christmas in Syria,” the charity tweeted.

#SyrianChristians hold a #Christmas parade down the streets of #Damascus, #Syria. This is a community that has undergone war & genocide for the past 8+ years. God bless them for their strength. 🙏 pic.twitter.com/aFsXOSDx5G

During the foreign-backed civil war in Syria, the country’s Christian communities were targeted by Daesh (ISIS)* and al-Nusra terrorists, who sought to annihilate the Christians, driving them out of their homelands or killing them outright.

Damascus was one of multiple Syrian cities preparing for Christianity’s most important holiday, with major communities across the country, from Tartous and Homs in the country’s west to Aleppo in the north and Suwayda in the south also making preparations. Christians, subdivided into Eastern and Oriental Orthodox Christians, Catholics and Protestants, combine to create just one of Syria’s melting pot of confessional and ethnic groups, which also include Shia, Sunni and Alawite Muslims, as well as Kurds.

Syria descended into a foreign-backed civil war on the wave of so-called ‘Arab Spring’ protests in 2011. By 2017, with the help of its Russian, Iranian and Hezbollah allies, Damascus managed to liberate most of its territories from the terrorists, and began the task of rebuilding the country. This effort has been complicated by the US and Europe’s refusal to commit funding to the reconstruction effort, and the Trump administration's efforts to steal the country's oil resources. Syrian President Bashar Assad estimates reconstruction could cost as much as $400 billion, and take up to a decade to complete.