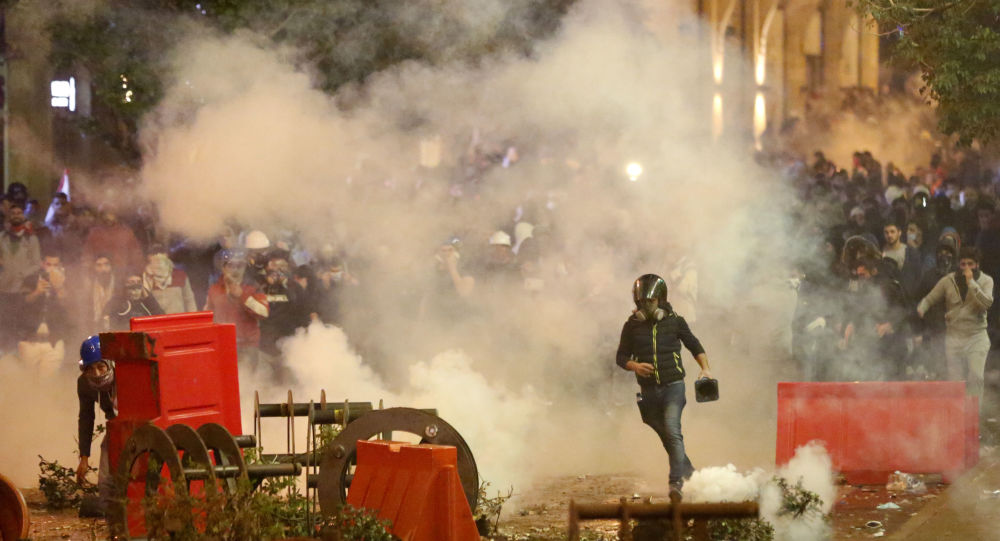 Previously, Lebanese Interior Minister Raya El-Hassan ordered law enforcement agencies to carry out a "rapid and transparent" investigation after another wave of violence swept the streets of Beirut on Saturday night.

On Sunday night, Lebanese protesters engaged in clashes with security forces near the Parliament building in Beirut, where the consultations to appoint a new prime minister are scheduled to start on Monday, the AFP news agency reported.

According to the agency, demonstrators attacked police with water bottles and firecrackers, with police officers using tear gas and water cannons to disperse the attackers.

"Just like yesterday, a group of provocateurs started throwing stones at the police and firing fireworks in their direction. Police fired tear gas after several warnings and the crowd retreated to the building of The An-Nahar newspaper", a participant of the rally said.

It still remains unknown if there were any casulties at the scene.

Protester charge security forces who were throwing rocks at them in Martyrs Square.

There are still at least a couple thousand protesters in martyrs sqaure. I believe it’s the biggest standoff of the #LebanonProtests #لبنان_ينتفض

On Saturday, dozens of demonstrators and policemen were injured and ferried to hospitals as police forces had to use tear gas and rubber sticks to oppose violent Shiite youths in central Beirut.

The Lebanese capital's Martyrs' Square and Ring Bridge have become common gathering places for demonstrators since the beginning of the protests. Although largely peaceful and non-partisan, participants have witnessed several attacks from aggressive youths.

The political situation in Lebanon has been tense ever since mass protests triggered by a deepening economic crisis forced the government to step down in October. President Michel Aoun has been struggling to put together a new government.