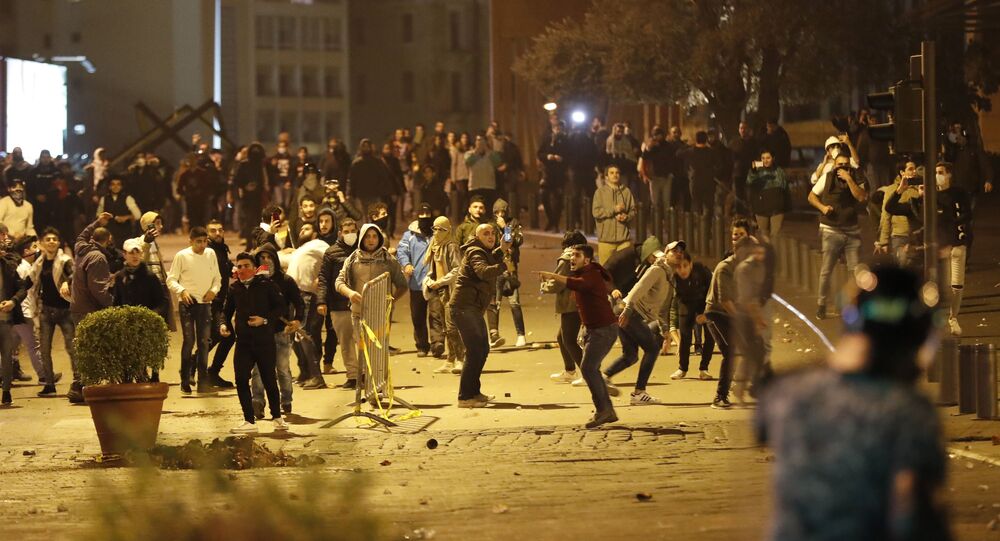 BEIRUT (Sputnik) - Lebanese security forces and the military are again using tear gas and rubber sticks against violent Shiite youths in the area of Martyr’s Square in central Beirut, where order had been briefly restored earlier in the day, an activist said.

The clashes started earlier on Saturday, and law enforcement managed to restore calm by making a truce with rioters who had spent hours trying to break through barricades surrounding protest camps at Martyr’s Square and Ring Bridge. Meanwhile, at the nearby street of Riad Al Solh, peaceful marchers tried to get past security forces guarding the national parliament building.

"The police are using tear gas in large quantities. The army is getting into the crowd and beating with rubber sticks. The situation is getting worse. More activists are arriving, the police are being showered with stones, garbage cans have been overturned in some streets to prevent police cars from driving up to the barricades", the activist said.

Video shows how around 4 Riot Police officers are cornering and dragging one protestor in Down Town #Beirut - only few hours before they had failed at arresting any of the anti-revolution thugs who attacked the protest square. #lebanon #LebanonProtests pic.twitter.com/ffZRVqJT7R

Video via @lucienbourjeily documents how security forces from the parliament attacked peaceful protestors earlier tonight in Down Town #Beirut - also journalists have been attacked & pushed aside. #lebanon #LebanonProtests pic.twitter.com/JNRPKkpvpR

Riot police chasing protesters earlier tonight. I was able to film this because they were at my right. As soon as I finished filming, another group of police came from my left and were chasing me! #LebanonProtests pic.twitter.com/REoXSedMSV

The LBCI broadcaster reported later in the day, citing the country's civil defence, that a total of 54 activists were wounded in clashes with the Lebanese police in central Beirut, and tens of them were hospitalized. At the same time, the Lebanese Interior Ministry said that 20 policemen, including three officers, were also injured in the unrest.

Martyr’s Square and Ring Bridge in central Beirut have become common gathering places for protesters in the nearly two-month long streak of demonstrations. Although largely peaceful and non-partisan, participants have witnessed several attacks from aggressive youths.

Lebanon has been on edge after mass protests triggered by a deepening economic crisis forced the government to resign in October. President Michel Aoun has been struggling to put together a new government.