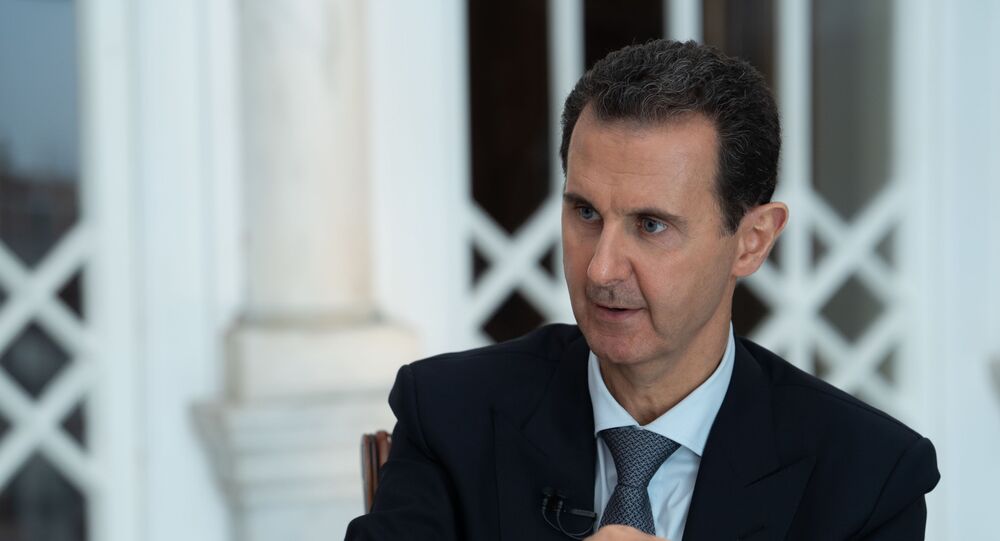 DAMASCUS (Sputnik) - Europe has to deal with the issue of refugees because of its prior support of terrorists in Syria, Syrian President Bashar Assad said in an exclusive interview with Italian Rai24 TV channel, broadcast by Syrian channels on Monday.

"We have to start with a simple question: who created this problem? Why do you have refugees in Europe? It's a simple question: because of terrorism that's being supported by Europe – and of course the United States and Turkey and others – but Europe was the main player in creating chaos in Syria. So, what goes around comes around", Assad said as quoted by SANA news agency.

Since the beginning of the Syrian civil war, millions of people have become displaced or fled to Europe, creating an ongoing migration crisis.

The Syrian president blamed the European Union as the main culprit.

"Because they publicly supported, the EU supported the terrorists in Syria from day one, week one or from the very beginning. They blamed the Syrian government, and some regimes like the French regime sent armaments, they said – one of their officials – I think their Minister of Foreign Affairs, maybe Fabius said 'we send'. They sent armaments; they created this chaos. That's why a lot of people find it difficult to stay in Syria; millions of people couldn't live here so they had to get out of Syria", he added.

According to the Syrian president, there were two major reasons leading to the devastating war, the first one being forbearance of extremism, especially the Wahabi ideology.

"If you want to talk about mistakes in dealing with this issue, then yes I would say that we were too tolerant with something very dangerous. This was a big mistake that we have been committing for decades - I am speaking about different governments, including myself before war", Assad said.

The second reason, as outlined by the Syrian leader, was that police left unattended too many outlaws ready to revolt against the public order, including by seeking assistance from abroad.

"For these outlaws, the government is a natural enemy because they do not want to get into prison", Assad said.

"The Syrian people around the world have a lot of money, and they want to come and build their country", President Assad said.

He also denied claims that Syria had a money problem. Assad said that Syrian and foreign business people sought to invest in his country but international sanctions were stopping them from coming and working in Syria.

The Italian news channel Rai24 exclusive interview with the Syrian leader was delayed from publication in Italy repeatedly before the channel said on Monday it would finally publish it. Rai explained earlier that it did not know when the 27 November interview would be published because it was not commissioned by any of its units and was Maggioni's initiative.

The Syrian president's office said that the repeated postponing of the interview's broadcasting was a ploy to conceal the truth about the country plagued by the civil war.