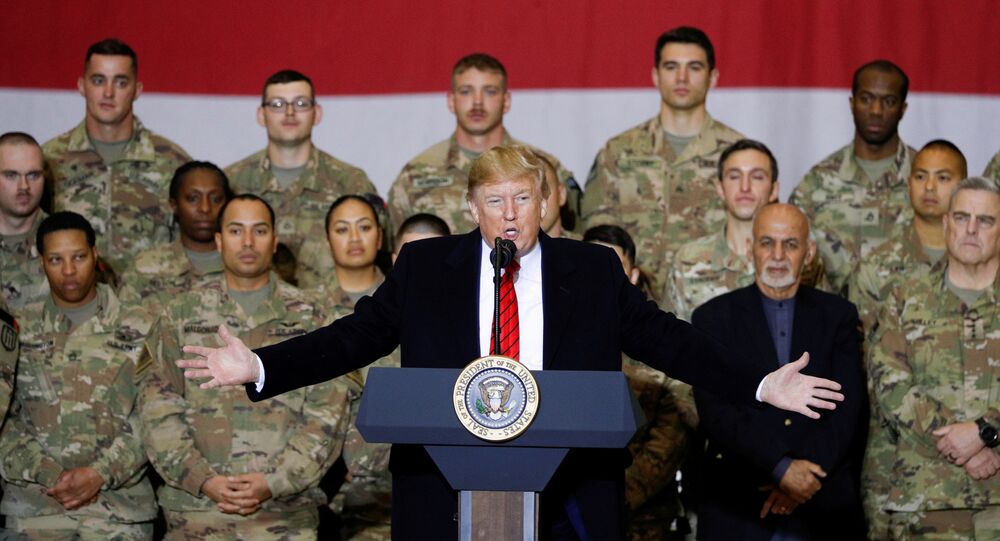 US Reportedly Resumes Negotiations With Taliban After Three-Month Halt

During his surprise Thanksgiving Day visit to a US base in Afghanistan, the US president mentioned that the Taliban* "wants to make a deal" despite these efforts failing in September 2019, albeit after apparent progress had been achieved towards reaching an agreement.

US representatives resumed negotiations with the Taliban* movement in Doha, Qatar on 7 December after a three-month halt, AFP reported, citing an anonymous source.

"The US rejoined talks today in Doha. The focus of discussion will be reduction of violence that leads to intra-Afghan negotiations and a ceasefire", the source said.

US officials have not commented on the AFP report.

The previous year-long negotiation efforts had seemingly reached a point of signing some sort of agreement that suggested the withdrawal of US forces after 18 years of war in Afghanistan in exchange for security guarantees from the Taliban* that the country won't become a haven for terrorist organisations. It could reportedly also have led to negotiations between the movement and the Afghan government in Kabul.

The talks, which were expected to reach their peak during a meeting between US and Afghan officials and Taliban* representatives at Camp David, were abruptly proclaimed "dead" by US President Donald Trump in September 2019 after an American serviceman was killed in a terrorist attack on Kabul claimed by the terrorist movement.

"I immediately cancelled the meeting and called off peace negotiations. What kind of people would kill so many in order to seemingly strengthen their bargaining position? They didn't, they only made it worse!" Trump stated at the time.

But after nearly three months of silence, Trump again brought up the initiative by stating during a recent surprise visit to an American military base in Afghanistan that the Taliban* still "wants to make a deal" with the US. However, he didn't elaborate on whether Washington is planning to do anything with this in the near future.

*The Taliban movement is a terrorist organisation banned in Russia