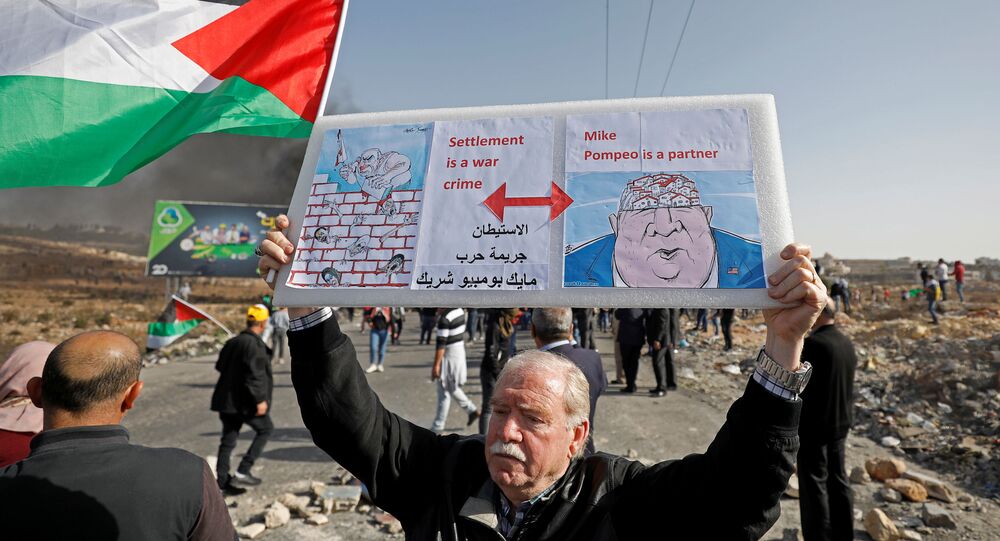 GAZA (Sputnik) - Dozens of Palestinians were injured during clashes with the Israeli military in the West Bank after protests in response to the United States' decision to recognize Israeli settlements in the territory began on Tuesday, media reported.

Earlier in the day, media reported that the president of the Palestinian Fatah movement, Mahmoud Abbas, made the call and was joined by other factions, urging Palestinians to join the "Day of Rage" protest against the US position on settlements.

According to the Palestinian WAFA news outlet, dozens of Palestinians suffered from tear gas and rubber bullets used by the Israeli military during the protests in some cities of the West Bank.

Following the statement, Israeli Prime Minister Benjamin Netanyahu backed on 19 November the bill that extends the Israeli law over strategic settlements in the southern West Bank.

© AFP 2020 / ABBAS MOMANI
Palestinians and foreigners march towards Israel's controversial separation wall between the West Bank village of Bilin near Ramallah and the Israeli settlement of Modiin Ilit during a demonstration against settlements in the area, on February 17, 2017

Israel has been in control of the Palestinian-majority West Bank since the Six-Day War in 1967. More than 120 Israeli civilian settlements have since been built in the disputed area. According to international law, these settlements are illegal. Among the international documents that codify the unacceptability of such practice is Article 49 of the 1949 Fourth Geneva Convention on the protection of civilian persons during times of war, which reads that "the Occupying Power shall not deport or transfer parts of its own civilian population into the territory it occupies."