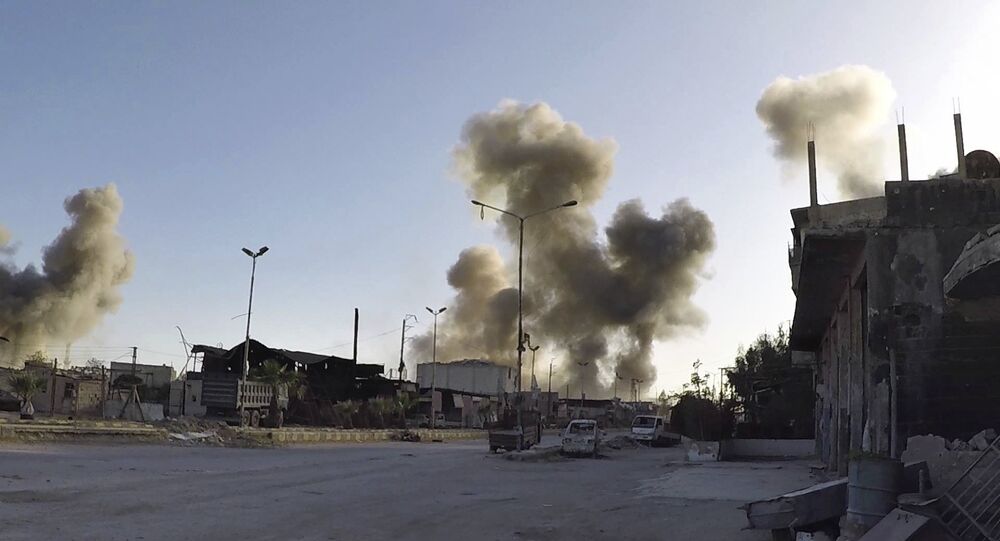 The Organization for the Prohibition of Chemical Weapons (OPCW) concluded in March that chlorine was most likely used in the suspected April 2018 attack on the city of Douma, which lies on the northeastern outskirts of the Syrian capital.

Three countries - the United States, the United Kingdom and France - carried out airstrikes against Syrian government targets, justifying their assault by claiming that the chemical weapons were allegedly used by the Syrian Army.

Wikileaks revealed that the OPCW's redacted version of the so-called fact-finding report on Douma's events had been intentionally doctored, misrepresenting the facts that the investigation team found on the ground in Syria after Western powers have attacked Syria.

According to the whistleblower organization, citing an e-mail sent by a member of an OPCW fact-finding mission to Syria to his superiors, this misrepresentation was achieved by selective omission, introducing a bias which undermines the credibility of the report.

The e-mail, exposed by Wikileaks, says that the crucial facts in the redacted version, “...have morphed into something quite different to what was originally drafted”, alleging that the document's fixing was done at the behest of the Office of the Director-General (a post held by Turkish diplomat Ahmet Uzumcu at the time).

Notably, the document said that the OPCW investigators found upon arrival that much of the physical evidence was no longer available.

Local militants have claimed, cited by Western media, that toxic gas came from cylinders dropped from aircraft, alleging Syrian government forces who had complete air superiority at the time. The redacted OPCW report seemed to support these conclusions, but the author of the e-mail outlined aspects he considered “particularly worrisome”.

“Likely one or more chemicals that contain a reactive chlorine atom. Such chemicals could include… the major ingredient of household chlorine-based bleach. Purposely singling out chlorine gas as one of the possibilities is disingenuous”, the leaked e-mail points out, stressing that the redacted report also removed context from a statement in the original draft, which doubted the likelihood of the gas having emanated from cylinders found at the scene in Douma.

The e-mail's author stressed this was “a major deviation from the original report”.

The redacted OPCW report also dropped another crucial detail about the Douma events. One piece of evidence broadcast across the world was footage claiming victims being treated in a hospital in the alleged aftermath of the attack in Douma. The symptoms shown were, however, not consistent with what witnesses reported seeing that day, the e-mail said.

“Omitting this section of the report (including the epidemiology which has been removed in its entirety) has a serious negative impact on the report as this section is inextricably linked to the chemical agent identified… In this case, the confidence in the identity of chlorine or any other choking agent is drawn into question precisely because of the inconsistency with the reported and observed symptoms. The inconsistency was not only noted by the fact-finding mission team, but strongly supported by three toxicologists with expertise in exposure to chemical warfare agents”, the e-mail revealed.

Another point of contention is the placement and condition of the cylinders reported to have contained the chemical agent. It has been alleged that their condition may not be consistent with having been dropped from the air making it unlikely that the cylinders were air-dropped, a point also discussed in an unreleased engineering report from OPCW that was earlier leaked by Wikileaks.

In conclusion, the author insists to release the full and unredacted report.

"I am requesting that the fact-finding report be released in its entirety as I fear that this redacted version no longer reflects the work of the team. The original report contains facts and observations that are all equally valid. The fact that inconsistencies are highlighted or observations not fully understood does not justify their omission. the inconsistencies and observations are based on the evidence and data collected", the e-mail argued.

Following the publication of the initial OPCW report in March, the Russian Foreign Ministry stressed the OPCW ignored evidence provided by Russia and Syria, which confirmed that the attack had been staged by the White Helmets, and expressed concern that the document sought to justify foreign strikes against Syria.

Residents of Douma interviewed earlier were unable to confirm that a chemical attack had taken place. The residents said they knew nothing about such an attack and were not aware of anybody having been affected by toxic chemicals.

The OPCW relied in its probe on data provided by the White Helmets, a rebel-linked group also known as Syria Civil Defence (SCD), that bills itself as a volunteer rescue force. Videos of alleged victims in a hospital being treated for what was claimed to be a chemical gas sparked a media frenzy last year but Russia believes the footage was staged.

The annual conference of the OPCW starts this Monday.