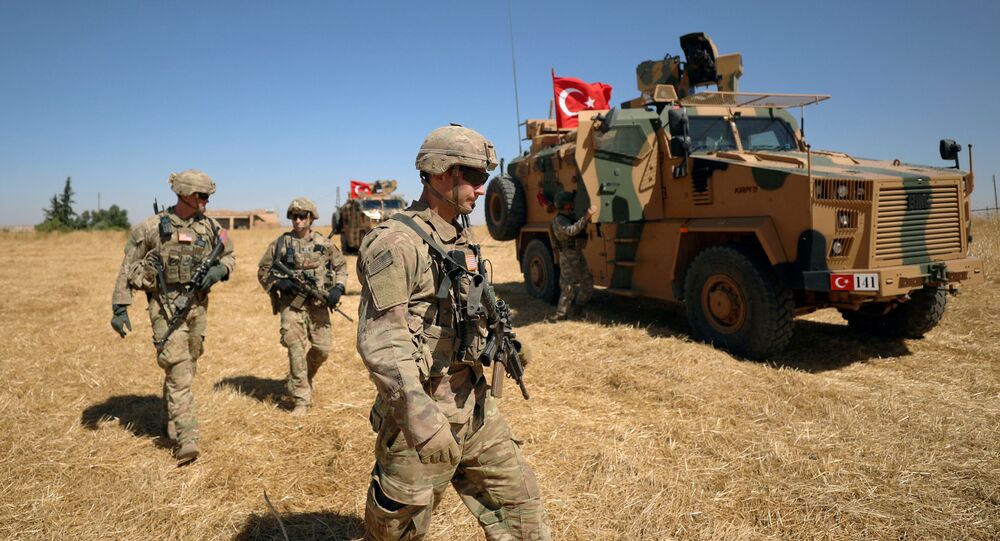 ANKARA (Sputnik) - Turkish President Recep Tayyip Erdogan has stated that the United States was conducting joint patrols with Kurdish militants in the security zone in northern Syria, which contradicts the US-Turkish arrangements on Kurdish forces' withdrawal.

"Today, we started our second joint patrol as part of the agreement with Russia. Unfortunately, the United States is holding separate patrols with the Kurdish People's Protection Units (YPG) terrorist group. However, they were expected to leave! How will the United States explain this? There is no such a thing in our agreement", Erdogan told reporters.

The statement comes after Ankara and Washington reached on 17 October an agreement on a 120-hour ceasefire to allow the withdrawal of YPG forces from the Turkish border area days after the start of the Turkish military operation against Kurdish militants in northern Syria.

As the five-day truce came to an end, Erdogan and Russian President Vladimir Putin signed a memorandum that would see the Kurdish fighters pull back from the border area. In addition, Turkey and Russia have since begun joint patrols in the operation zone in Syria along the Turkish border.

On 9 October, Turkey launched Operation Peace Spring in northeastern Syria to clear the area of Kurdish units and the Daesh* terrorist group. US movement in Syria has caused most instability in Syria over the past month, as a flip-flopping strategy from Washington ordered US troops withdrawn from Syria into Iraq only to return a portion shortly thereafter to guard oil fields.