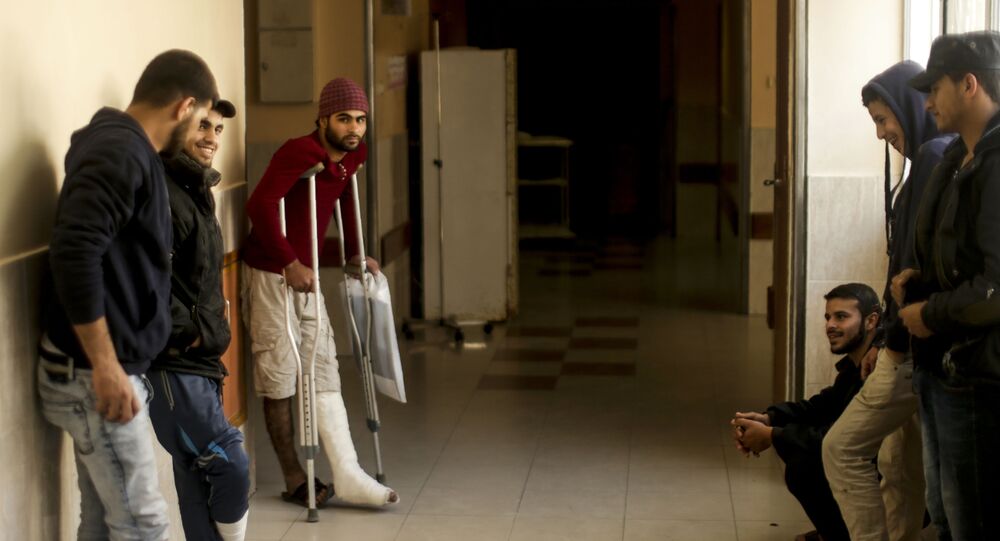 Despite rockets, hostilities and high tensions between Israel and Hamas, there are some who put differences aside, providing Gazans with medical help. Physicians for Human Rights does exactly that, vowing to treat everyone who seeks medical attention.

On Friday night at least ten rockets were launched from the Gaza Strip towards Israel's southern communities. The Iron Dome Aerial Defence System managed to intercept and eliminate nine of them. One was a direct hit, striking a house in Sderot, a town that lies just a kilometre away from the Strip.

Israel was quick to blame Hamas, an organisation that controls the Gaza Strip and that is considered terrorist by Israel, but Hamas refutes these allegations pointing the finger of blame towards rival group Islamic Jihad.

For Mahmoud Saeed, a volunteer psychologist from Physicians for Human Rights, an NGO that was established in 1988 and provides the Gaza Strip with medical help, one thing is clear: more hostilities towards Israel will push the country to retaliate and that will mean more work for doctors like him.

"I've been doing this for twenty years already and all I want to do is to help others," said Saeed, an Arab Israeli, who goes into Gaza once a month, leaving his clinic in northern Israel, in order to help patients in the Strip.

But he is not alone. Physicians for Human Rights has more than 3,500 members and volunteers - all of whom are medical professionals, ranging from surgeons to paediatricians - who, according to the organisation's website, are determined "to promote a just society where the right to health is granted equally to all people."

This is carried out through the establishment of open and mobile clinics, the provision of medicine and the training of local medical staff.

Israel imposed a blockade on the Gaza Strip in 2007 after Hamas took control over the Strip, ousting Palestinian President Mahmoud Abbas' loyalists. Israel imposed tough regulations over the enclave including an embargo on various goods, medicine and medical equipment. Israel also controls all access to the Strip, deciding on who can leave Gaza to seek medical attention in Israeli hospitals.

While Jewish doctors are not allowed to visit the Strip due to fears of possible kidnapping and murder by the various extremist groups that operate there, Arab Israeli doctors are welcomed in. And Saeed says he is not afraid.

Gaza is not Scary

"Why should I be afraid? They will do nothing to me," he said in a phone interview adding that many Jewish doctors have expressed their desire to go to Gaza and help local residents but their pleas were met with a fierce "no" from Israel's authorities.

This is why, at times it feels, believes Saeed, that Israel cares less about Arab doctors than their Jewish colleagues but he - as a doctor - says he is impartial, committed to giving help to all those seeking it.

"In 2006 during the Second Lebanon War I volunteered for 33 days giving help to everyone who needed it: Jews, Druze, Christians and Muslims alike," he said.

In Gaza, he says he has seen it all. "You get to treat everyone: from women who lost their homes, to parents who lost their loved ones. The abundance of cases is so big that I cannot even recall what the event that traumatised me more was," he added.

But despite the fact that Gaza's residents' suffering is emanating primarily from the Israeli-Palestinian conflict, Saeed says he talks to his patients about everything but politics. "We just don't go into this topic. We stick to listening to their problems and try to help them," he added.

The only problem is that psychological treatment very often needs a sequence of therapies but Saeed says he keeps in touch with his patients making sure to call them and visit them on a regular basis.

Another challenge is a lack of money. While the organisation does provide doctors with basics - food, accommodation and transportation - they cannot offer more than that.

"Nobody pays me for the days that I leave my clinic and go volunteering in Gaza. But I don't care as long as I can help. If I was offered to do that more often and come to Gaza for more than two days, I would have done it without hesitation," he added.