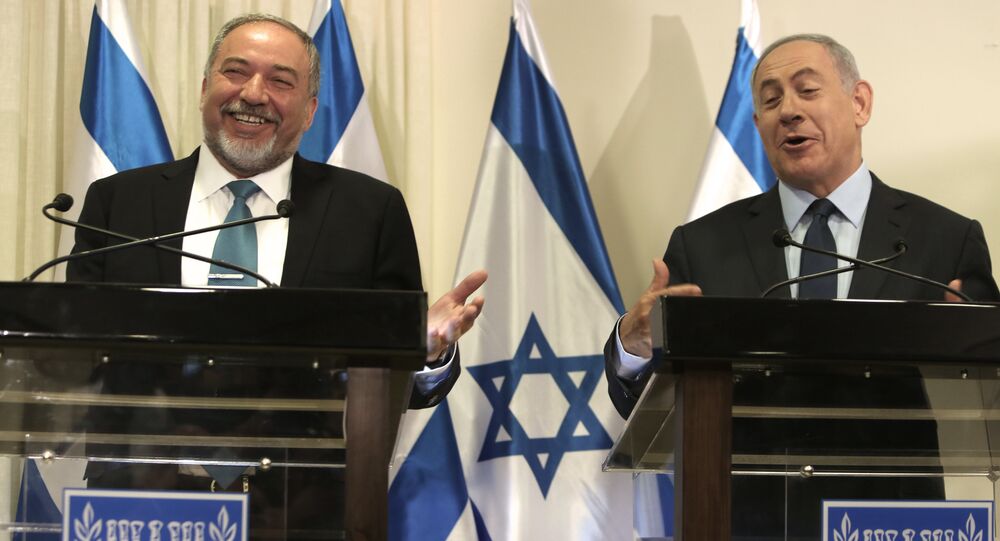 As the third round of Israeli elections looms, Israel Beitenu's leader Avigdor Lieberman is still holding the keys to what the Blue and White party chief is struggling to do - form a coalition.

While many try to decipher the real motives of Israel Beitenu Chief, Avigdor Lieberman, whose party remains a key factor in forming a government in Israel, his former aide says his motives are purely personal.

"All he wants is to break up the Likud and bring Netanyahu down", said Danny Ayalon, who has known Lieberman for years and who had served as Lieberman's deputy when he filled the position of Israel's foreign affairs minister.

Ayalon doesn't believe his former boss's calls for a unity government and says that the only thing that motivates him is his thirst for revenge.

Lieberman met Netanyahu in 1988 and got a fast promotion in the ranks of the Likud. In 1996, during Netanyahu's first tenure as Israel's Prime Minister, he was appointed to serve as director-general of the Prime Minister's office. That, however, didn't last long with Netanyahu terminating his post, something that Lieberman has never been able to forget nor forgive.

But there are other reasons too, believes former official. At some point, Lieberman realized that his party would cease to exist simply because his base of supporters was depleting and therefore he wanted to change course.

Statistics back his claims. In the 2009 general elections, Lieberman's party received an unprecedented 15 seats in the 120-seats Israeli parliament. In 2013 - when Lieberman joined forces with the Likud, running together as part of the same list, he only got 11 seats (in total the list got 31 seats – ed.). The situation continued to deteriorate in 2015 when his party managed to secure only six seats, and again in 2019 in the first round of the parliamentary race when he barely passed the threshold.

"There are still people who vote for him, but mainly the older generation of immigrants from the former Soviet Union. The younger generation, born or raised here, don't back him, preferring to vote for other parties", Ayalon said, adding that the reason for Lieberman's fall lies in the fact that he has never fulfilled his promises.

"As a man who held several key positions: he has been Israel's minister of infrastructure, minister of transportation, minister of defence, of foreign affairs and strategic affairs, he is remembered as someone with zero achievements", argued Ayalon, listing promises that Lieberman failed to keep.

These included the vows to assassinate Ismail Haniyeh, one of Hamas' top leaders, if he gets the position of Israel's defence minister, he also promised to implement targeted killings of other Palestinian leaders believed to pose a threat to the country's security, stop the transfer of money to Hamas, oust the families of terrorists, revoke the citizenship of Arab citizens who have been involved in terrorism, and pass a law requiring the death penalty for terrorist acts.

Little has been done in the social sphere too - according to Globes, one of Israel's leading websites when it comes to financing and economy. Although he did increase monetary aid to pensioners coming from the former Soviet Union and helped soldiers with grants and benefits, other essential issues remained unsolved, including mortgage reforms, free afternoon child-care facilities and minimum pensions for new immigrants.

Even his current battle against the Ultra-Orthodox parties - that he calls messianic is met with scepticism, primarily because Lieberman has been a part of the religious block for many years and has been perceived as a staunch supporter of Ultra-Orthodox parties. In the 2018 municipal elections, for example, it was Lieberman whose support helped the current mayor of Jerusalem Moshe Leon, affiliated with the religious parties, acquire his post.

Yet, despite past failures, the Israeli media and public seem to embrace Lieberman with some people calling him a "national hero". But Ayalon is certain that it is only because of their hatred of Netanyahu.

"People tend to have a short memory, and many forget what Lieberman promised throughout the years. Now, when he is fighting Netanyahu, he is considered a hero. But at the end of the day, I don't think that too many people believe him, and if elections were to be held today, he would lose even more voters", he said, stressing that for Lieberman the newly embraced anti-religious slogans are just a gimmick.

Ayalon believes that there are several reasons for Lieberman's current success.

"First of all, he is a man who successfully conceals his emotions. Although he is very sensitive, he manages to position himself as a tough leader, something that the Israeli public likes. Secondly, he is a good campaigner who is also very kind to the press", he said, adding that Lieberman is also good with choosing the right people.

But as somebody who has worked with him for many years, Ayalon says it is next to impossible, to stay around the man for too long. "It is a one-man's show with Lieberman calling the shots, and getting rid of anyone who dares to think differently or challenge his views. That's why I believe that as soon as Lieberman disappears from Israel's political map, his party will too," he concluded.

Israel Beitenu Responded to the Allegations of Ayalon
Mr Ayalon is a former MK (a member of parliament - ed.) for Yisrael Beitenu, who wasn't included in the party's list of candidates in 2013 elections.

Since then, he obsessively criticizes the party and personally Avigdor Lieberman for reasons that are clear only to him.

In 2013, he even tried to testify against Lieberman in the Jerusalem Magistrate Court, but the judges found Mr Ayalon's testimony inaccurate, unreliable and in contradiction to the rest of the witnesses.

Yisrael Beitenu considers it unnecessary to comment on the fabrications of a person who is remembered in Israeli politics as perjury," said the statement.