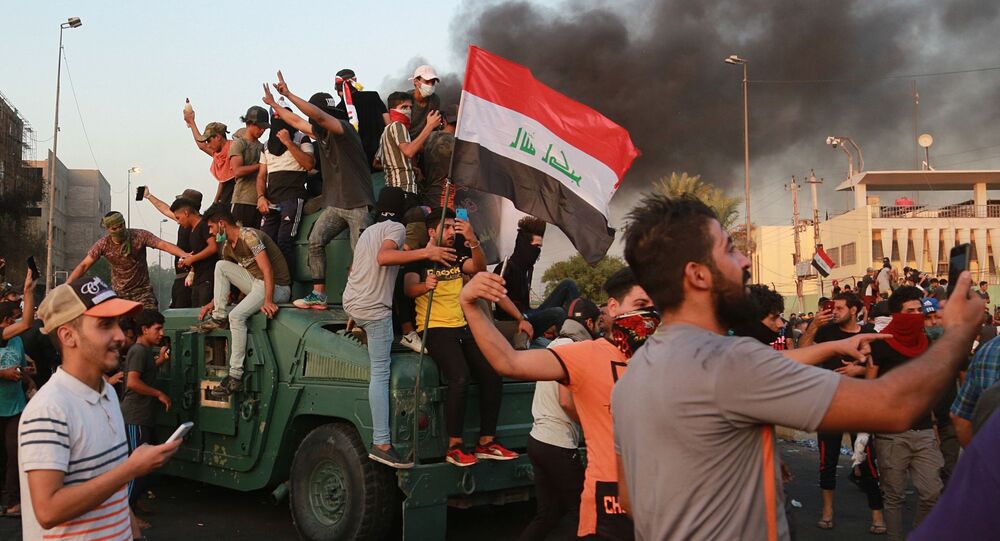 Death Toll From Iraqi Protests Up to 100 People, 5,500 Others Injured – Rights Commission

MOSCOW (Sputnik) – The number of people killed in the fresh wave of violent demonstrations in Iraq has climbed to 100 while 5,500 people have sustained injuries in the unrest, the Iraqi Independent High Commission for Human Rights (IHCHR) has said.

The rallies began on 1 October and were suspended in mid-October for pilgrimage before resuming last Friday. During the first wave of protests, 149 people were killed and around 3,500 people sustained injuries. Demonstrators have said that they were attacked by security forces including those who used live ammunition. According to the commission's earlier data, 74 people were killed and more than 3,600 others were wounded in the ongoing unrest.

"Violence as a result of clashes against security forces … and demonstrators with the use of excessive power, tear gas, batons and stones over the recent days led to 100 people killed and 5,500 demonstrators and security forces [members] injured", the commission wrote on Facebook late on Wednesday.

The statement noted that it included the data for 25-30 October.

Security forces guarding the Green Zone is trying to push back the protesters #IraqXXV #نريد_وطن pic.twitter.com/FxgqptcvqN

Ali al-Bayati, a member of the IHCHR, said that on Wednesday, one protester was killed and dozens of others were wounded in Baghdad as they attempted to cross the bridge leading to the so-called Green Zone where government offices and foreign missions were located.

Breaking: My security sources inside the Green Zone just confirmed: attack rockets or mortars landed near the U.S embassy in #Baghdad and hit the checkpoint , an Iraqi soldier was killed ، some 50 meters from the Embassy gates, near Babylon market

The area has been a scene for the ongoing unrest in the Iraqi capital. Media reported late on Wednesday that a projectile had struck in the vicinity of the US Embassy in the Green Zone, leaving one Iraqi serviceman dead.

The demonstrators call on the government to resign and demand economic reforms and fighting against corruption. As the protests resumed last Friday, Iraqi Prime Minister Adel Abdul Mahdi said that he would carry out a cabinet reshuffle and introduce changes to election laws. Mahdi said that the government's resignation, demanded by protesters, would throw the country in chaos.