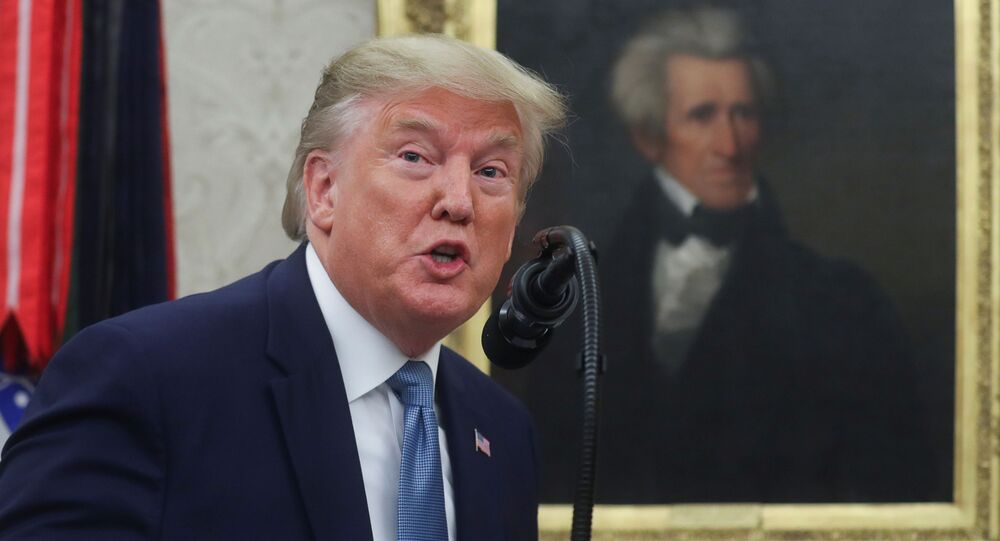 The Iraqi president has expressed concerns over the US pullout from Syria, arguing the military victory over Daesh is great, but apparently incomplete, since there are still fears of another rise in terrorism in the region in light of Turkey’s now halted offensive.

In an interview with "Axios on HBO”, Iraqi President Barham Salih noted he continues to value his country's alliance with the US, 16 years after the invasion of Iraq.

He made it clear that he is striving to keep that alliance intact, indicating though that the Trump administration's policies are making it difficult to fulfil. ‘Recalibration’ and ‘Rethinking’ "The staying power of the United States is being questioned in a very, very serious way”, Salih said stressing that “the allies of the United States are worried about the dependability of the United States”.

According to Axios, Salih resorted to such suggestive words as “recalibrate” and “rethinking” to depict the way Iraq should view its relationship with the United States, noting at some point that "dependability is important" in allies. When asked if the US pullout from the Middle East could lead to a shift of attention toward Russia and Iran, Salih said he wouldn't totally rule it out, the edition wrote.

"Of course, there are many actors in this neighbourhood”, Salih started off, continuing: "I'm not one of those, again, who goes and [says] to the Americans or the Russians, 'if you are not doing this for me, I'm gonna go the other way round’. [But] we need to think of our own priorities, and I've been very clear about it”.

In the lengthy, almost hour-long interview conducted in one of Saddam Hussein's old palaces, for the most part unchanged since his tenure, Salih expressed concern about Trump's general idea to disengage from the Middle East and bring US troops home.

Speaking about the Syrian pullout, he stressed it could spawn the resurgence of Daesh, more specifically, “a revival of these extremist groups" that would be "basically fueling another cycle of this conflict”. "The military defeat of ISIS is an important victory, but not incomplete [sic] and precarious too as well. It can easily unravel. And this is what I'm worried about”, Salih remarked also adding he had been in talks about this with senior American officials and “he doesn’t mince his words”. "Five years of blood, treasure, effort — a lot of human misery went into defeating ISIS”, he said.

"This victory was [not] easy, and for anyone to become complacent about it is terrible, reckless, dangerous, tragic”, the Iraqi president argued.

Potential US-Iran War - ‘Disaster for Everybody’

He also expressed "worries" about a conflict between the United States and Iran, “a neighbour of ours that we have 1,400 kilometres [870 miles] of borders with” — and that this war would spell "disaster for everybody”.

"The United States is an important ally, partner. … We want this to continue and we definitely don't want our territory to be used”, he said. ”We should try and stop it because Iraq cannot sustain it, cannot survive it”, he said about an attack on Iran that President Trump mulled but ditched in June.

Last week, US Defence Secretary Mark Esper said that the US would maintain a "reduced presence" in Syria, citing concerns about Daesh* terrorists taking control of nearby oil fields.

Syrian TV shortly thereafter reported that a column of US troops had returned to northeastern Syria’s al-Hasakah Province from Iraq, where the contingent headed “to defend” the country and fight Daesh, per Esper. Almost two weeks ago, the Pentagon chief pledged that the US would withdraw all of its 1,000 soldiers from northeastern Syria, in line with POTUS’ statement, after Turkey launched a military operation in the area to drive Kurdish militias and remaining Daesh terrorists away from their joint border with Syria.

Erdogan announced that the military operation launched on 9 October against YPG Kurds and Daesh militants remaining on the border, and carried out until 17 October would be halted, with Vladimir Putin and Erdogan agreeing that Russian and Syrian guards would facilitate the removal of the Kurdish militia away from the border.

Iraq Has Information on Deaths of Daesh Leader Baghdadi, His 2 Wives, 1 Guard - Source