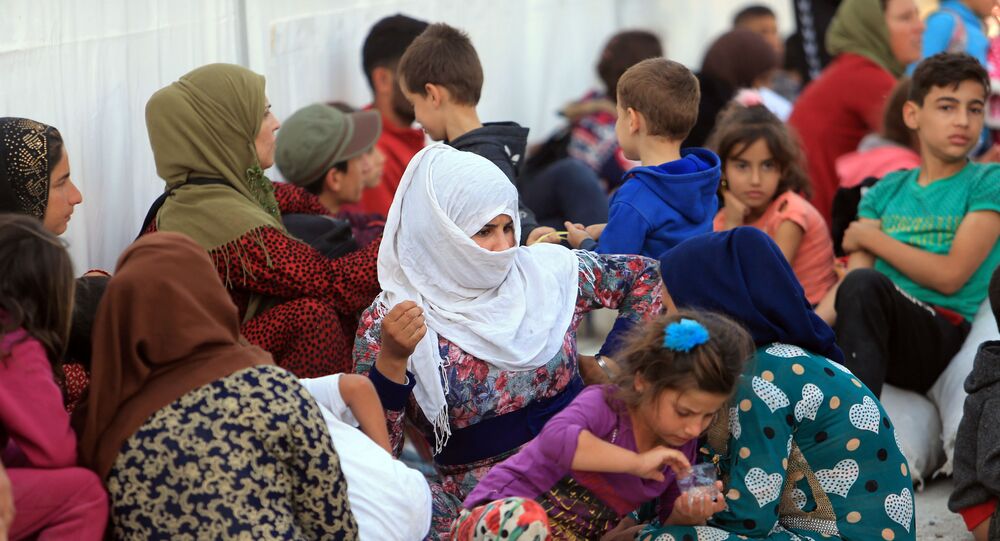 Turkey and Amnesty International engaged in a heated dispute Friday over the return of Syrian refugees after the human rights organization claimed that some Turkish officials misled Syrians into signing documents, which granted Ankara permission to deport them back to their country.

Amnesty’s new report, “Sent to a War Zone: Turkey’s Illegal Deportations of Syrian Refugees,” pushed back against against Ankara’s claims that Syrian refugees transported back to their country in the past several months chose to leave Turkey voluntarily.

The document, which was constructed around 20 “verified cases of forced deportations” between May 25 and September 13, revealed it's likely that hundreds of refugees were “swept up, detained and transported against their will” after being “misled or threatened into signing [‘voluntary return’] forms” of which they were not provided personal copies.

Of the forced deportations investigated and verified by Amnesty, the organization claims that in all 20 cases, individuals were packed onto buses with dozens of other refugees who were “handcuffed with plastic ties” while en route to “one of the world’s most dangerous countries.”

“I felt like I was between heaven and hell. I just wanted to arrive somewhere. I was just waiting for it to end. Imagine spending 26 hours on a bus, with just one glass of water and
half a sandwich,” a father of eight identified only as Farid told Amnesty in July 2019. “And every two hours the [Gendarmerie (Turkey’s police force)] would come to hit us and wake us up.”

Farid also accused an Arabic interpreter of forging documents, which required a fingerprint, after he argued about the details listed on a form. According to the father of eight, the interpreter signed and put his own fingerprint on refugees’ “voluntary return” documents.

Hami Aksoy, spokesman for the Turkish Foreign Ministry, spoke with Al Jazeera following Amnesty’s publication and said the claims within the report were “untrue and imaginary”

“While we are hosting 4 million Syrian refugees, including 3.6 million Syrians, within our borders, we are studiously implementing our policy of 'non-refoulement,'" Aksoy asserted.

The Turkish official added that Ankara’s authorities have “been carrying out the 'repatriating process' in collaboration [with] the UN refugee agency and other non-governmental organisations. Our country has in every opportunity always stressed that refugee returns should be voluntary, secure and in line with the international law."

The report’s news release said that Turkey, which shelters some 3.6 million Syrian refugees, overwhelmingly deported adult men, but children and entire families were also included. It added that “any interaction with Turkish police or migration officials” in particular put refugees at risk of deportation.

Amira, a 22-year-old Syrian refugee whose husband is said to have been deported on August 24, attempted to enter a Provincial Directorate of Migration Management office in Istanbul earlier this year to apply for “family reunification,” but was instead blocked from entry by a building official and told “you should just follow your husband to Syria,” Amnesty’s report said.

Amnesty’s summary concludes by saying that Ankara’s efforts in hosting refugees are commendable but do not absolve it of wrongdoing, and that “Turkey’s practice of forcibly returning refugees to Syria, where their lives are at risk, is a dangerous and illegal practice that must end.”

This is not the first time Turkey has been accused of deporting Syrian refugees under the guise of “voluntary return” forms. Back in July, Human Rights Watch’s Associate Emergencies Director Gerry Simpson countered Turkish Interior Minister Süleyman Soylu’s claim that Turkey had simply assisted with the transportation of refugees “who voluntarily want to go back to Syria.”

“Turkey claims it helps Syrians voluntarily return to their country, but threatening to lock them up until they agree to return, forcing them to sign forms, and dumping them in a war zone is neither voluntary nor legal,” Simpson said. “Turkey should be commended for hosting record numbers of Syrian refugees, but unlawful deportations are not the way forward.”

Turkey has served as a home for some 3.6 million refugees from Syria since conflict broke out there in 2011, and Ankara has been critical of the international community’s unwillingness to provide appropriate assistance to lessen the financial burden.

In recent years, approximately 365,000 refugees have departed Turkey for Syria, according to a Friday report from Al Jazeera, citing Turkish authorities. In addition, a recent policy change has called for Syrian refugees to return to the provinces in which they are registered. Yasin Aktay, an adviser to Turkish President Recep Tayyip Erdogan, told the outlet that a number of unregistered refugees have been returned to “safe areas” in Syria since the policy’s enforcement began in the summer.

"These are not forced returns, as they were not supposed to be in the country in the first place. The directorate-general of immigration has also accepted back many refugees after they proved their status and situation," he said. "They were only allowed to go to safe areas with livelihood and security, and were given the time and opportunity to prove their status.”

Earlier this week, Erdogan and Russian President Vladimir Putin reached a deal and drew up a memorandum concerning an understanding on actions to follow in Syria. Details of the agreement were later shared with Syrian President Bashar Assad in a phone call.

One of the main points of the agreement calls for Kurdish military units to withdraw at least 30 kilometers from Syria’s border with Turkey so that a safe zone may be established.

Bette Midler Cheers Neighbour Who ‘Beat the Sh*t Out of Sen. Rand Paul’ After His Criticism of Kurds