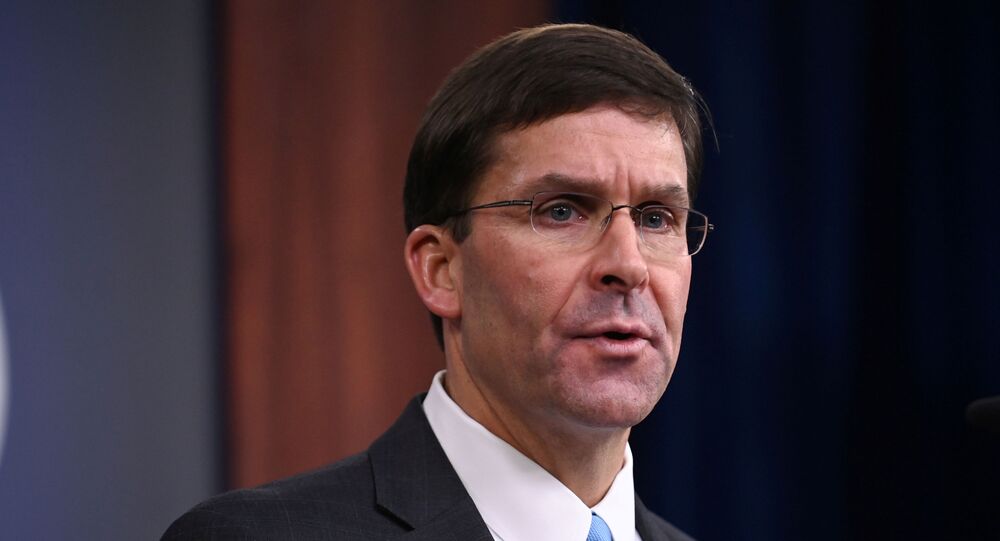 Pentagon Chief Mark Esper has been paying unofficial visits to Middle Eastern countries since 18 October. He will reportedly get updates on the current operations in the region and then will head to the NATO ministry in Brussels where he will meet with his Turkish counterparts and discuss the campaign to defeat the Daesh* terrorist group.

Esper has arrived in Baghdad for meetings with his Iraqi counterpart and the prime minister Adel Abdul Mahdi to discuss matters of mutual concern in the region, Reuters reported.

The counterparts will also reportedly discuss the partial withdrawal of US troops from Syria and the role Iraq will play in it.

SecDef Esper arrives in Baghdad. No photos allowed of his arrival - so here is his media contingent instead. pic.twitter.com/BAZ4RFFbLN

​Esper earlier stated that around 1,000 US soldiers, withdrawn from Syria after the beginning of Turkey's offensive there, would head for western Iraq.

"We're still in the early stages of withdrawal from northeast Syria. It will take weeks, not days, and we're… in many ways only days into the withdrawal. The aim is to pull our soldiers out and eventually get them back home", Esper said.

He added that the weeks needed for US forces to leave Syria left plenty of time for Washington and Baghdad to work out the details of a withdrawal from Iraq.

Meanwhile, the Iraqi government said on 22 October that US forces now in Syria would not be allowed to remain in western Iraq.

On 21 October, Esper said that a small contingent of American troops could remain in Syria to protect oil fields but that the proposal had not been discussed with US President Donald Trump.

The visit comes amid a recent ceasefire deal between Washington and Ankara intended to halt Turkey's military offensive in Syria aimed at the local Kurdish militants, which ended a few hours ago.

The United States announced the withdrawal of its troops from northeast Syria just two days before Turkey launched its military operation in the area. Ankara’s stated aim was to clear it of terrorists and Kurdish militants, which Ankara designates as terrorists. The White House said at the time that it would not "support or be involved in" Turkey's operation. A week later, US Defence Secretary Mark Esper said that an additional 1,000 troops would be withdrawn from the northern part of Syria so the US military would not end up trapped between rival armies.

The offensive has faced widespread condemnation from across the globe, with Damascus slamming it as a violation of its sovereignty and deploying troops to the northeast of the Arab Republic to help Kurds repel the offensive. Several countries, including the US, Germany and the UK announced an embargo on weapons exports to Turkey over the move.