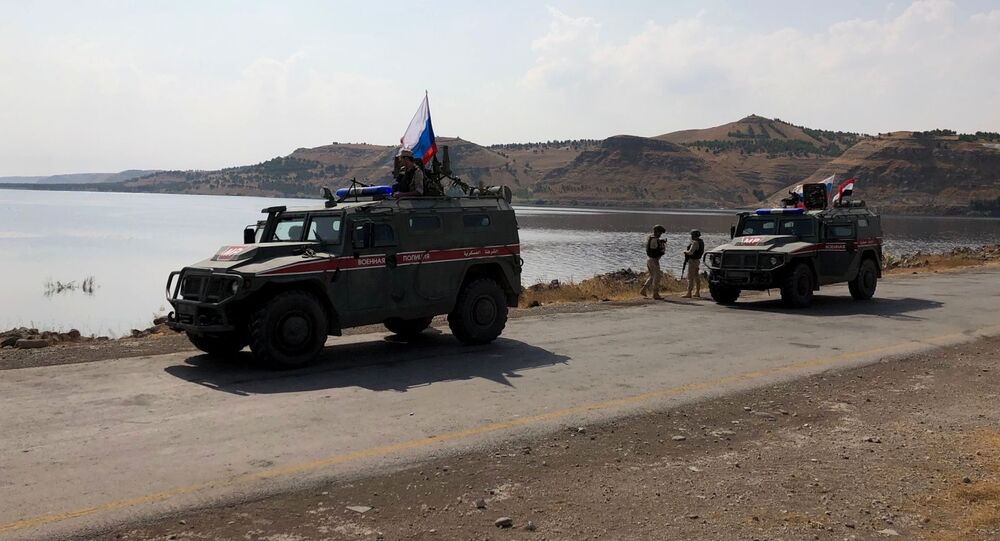 MANBIJ, Syria (Sputnik) - The Russian military police deployed in the Syrian province of Aleppo have begun patrolling northeast of the town of Manbij, a police representative told reporters.

"The patrol route lies along with the frontline positions of the Syrian Armed Forces several kilometres from the village of Qeirata on the Sajur River, not far from where it flows into the Euphrates", the officer said.

According to him, this area was patrolled by US troops who withdrew toward the Iraqi border when Turkey's operation in northeast Syria began 10 days ago.

The Sajur acts as a contact line between the Syrian Armed Forces and anti-government armed groups backing Ankara in its Syria operation.

The officer added that there were patrols southeast of Qeirata as well, near Qara Qozak, which is located on the left bank of the Euphrates, next to a bridge and a road that heads in the direction of Mosul, Iraq.

Most passengers and goods are transported via the bridge, the nearest similar crossing is more than 60 miles southeast, in Raqqa, the officer said.

Russian President Vladimir Putin and his Turkish counterpart, Recep Tayyip Erdogan, agreed Tuesday that the Russian military police and Syrian forces would patrol the area along the Syrian border with Turkey.

Prior to this, Turkey and the United States reached an agreement on establishing a 120-hour ceasefire in northeast Syria to allow the withdrawal of YPG fighters from the border area. However, both Ankara and the Kurds have accused each other of violating the truce.

On 9 October, Erdogan announced the launch of Operation Peace Spring in northeast Syria to clear the border area of YPG fighters and create a safe zone for the relocation of Syrian refugees currently residing in Turkey.