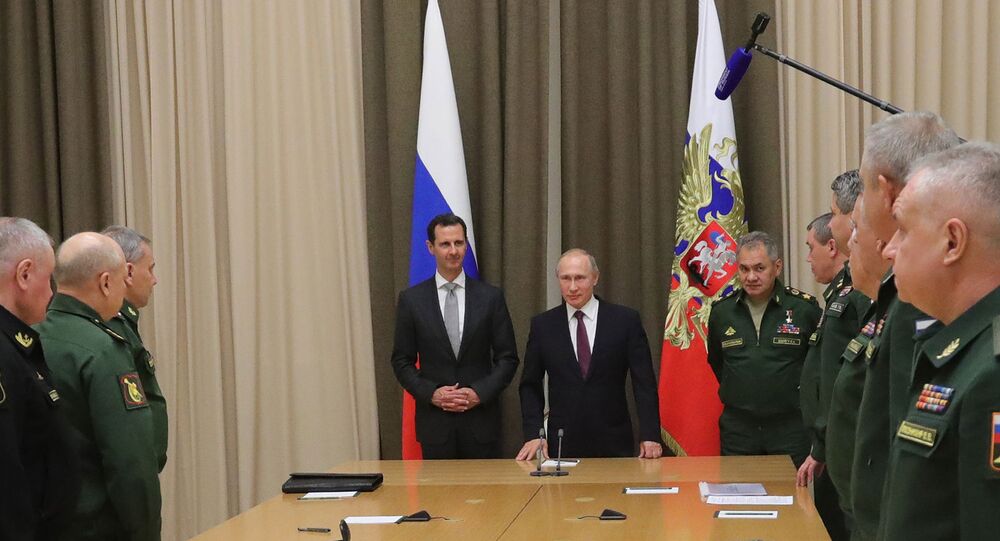 "The head of the Russian state informed his Syrian counterpart about the outcome of the meeting [with Turkish President Recep Tayyip Erdogan], which lasted more than six hours, and outlined the main provisions of the memorandum of understanding agreed upon during the meeting," Peskov said.

According to Peskov, the Russian president stressed that in the end, the main task is to restore the territorial integrity of Syria and to continue joint efforts on the political track, including the work within the framework of the Syrian Constitutional Committee.

Peskov added that Assad expressed support of the decisions taken during the Russia-Turkey summit in Sochi.

"President Assad thanked Vladimir Putin, and expressed his full support of the results of the work, as well as the readiness of the Syrian border guards to patrol the border together with the Russian military police," he said.

Memorandum of Understanding Between Turkey and the Russian Federation pic.twitter.com/sEZ0K1zEzV

​According to the Russian and Turkish Presidents, the joint memorandum will allow to resolve a rather urgent situation that has developed on the Syrian-Turkish border.

The memorandum stipulates that Russian military police and Syrian border guards will facilitate the withdrawal of Kurdish militia from a 30-kilometer (18-mile) zone on the border with Turkey within 150 hours starting from Wednesday. Afterward, the Russian and Turkish forces will begin jointly patrolling the area to the west and the east of Ankara’s operation, except for the border city Qamishli.

Turkey launched its offensive against Kurdish militias, viewed by Ankara as terrorists, on 9 October after its talks with the United States on a "safe zone" in the border area collapsed. The Turkish military operation has faced widespread condemnation from across the globe, with Damascus slamming it as a violation of its sovereignty and deploying troops to the northeast of the Arab republic to help Kurds repel the offensive.