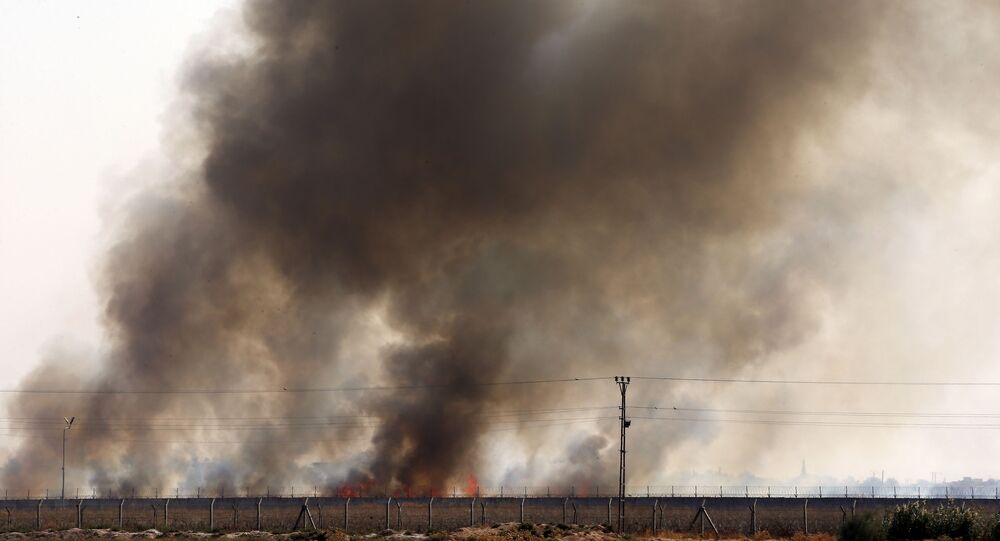 MOSCOW (Sputnik) - At least 11 people were killed and 74 injured in a Turkish airstrike on a convoy in northern Syria, Kurdish media reported Sunday.

According to the ANHA news agency, one of its correspondents was also killed in the Turkish airstrike.

The France 24 broadcaster said at least one of their journalists was also among the dead, while two French reporters were reportedly injured in the attack. "Our team is fine but some colleagues are dead", Stephanie Perez, a French journalist, tweeted earlier.

The attack hit a convoy outside the border town of Ras al-Ain which Turkish forces had seized earlier in the day, according to the Kurdish-led Syrian Democratic Forces (SDF).

Earlier reports suggested that at least 9 people had been killed, but the Kurdish-led military, cited by local media, put the death toll at 11. It  remains unclear how many civilians are dead.

Turkey on Wednesday launched its large-scale military offensive into Syria dubbed "Operation Peace Spring", ostensibly against Kurdish-led forces and Daesh terrorists in northeastern Syria, following an abrupt withdrawal of US forces in the region.

US forces have collaborated with and suportted Kurdish elements in their self-declared Kurdish Autonomous Administration - which Damascus does not recognize - in northeastern Syria, following joint operations between the two groups against Daesh terrorists.

Earlier in the day, the administration of the Kurdish authority in northern Syria announced striking a deal with the Syrian government under which the latter would deploy its troops along the border with Turkey to assist the Kurds in repelling Ankara.

Ankara declared that its Syrian invasion is intended to clear border areas from Daesh and Kurdish-led forces - including Kurdistan Workers' Party (PKK) and their affiliated SDF and YPG, which Ankara considers to be terrorist organizations - to create a so-called safe zone that would be used to return millions of Syrian refugees who fled their homes over the course of the ongoing 8-year Syrian civil war.

Damascus views the Turkish invasion as a grave violation of Syria's territorial integrity. A number of countries, including Russia, have called upon Turkey to stop creating obstacles to the peace process in Syria.