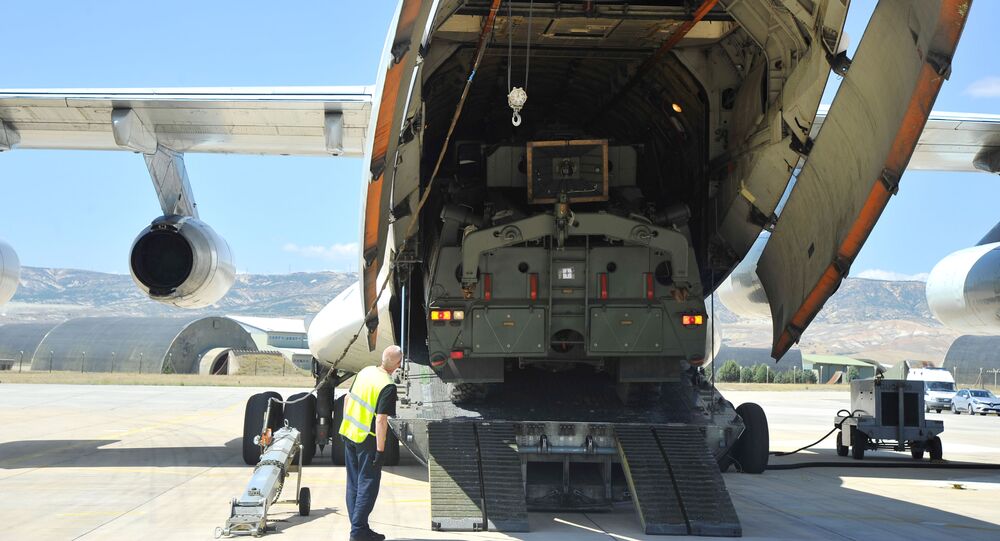 Earlier, after accusing the US of providing Syrian Kurdish forces with “sophisticated and heavy” weaponry, Turkey’s foreign minister said Ankara expects solidarity from its NATO allies over its operations in northern Syria. Most of Turkey’s allies have criticised the campaign, with some threatening Ankara with sanctions.

Turkey purchased its S-400 air defence systems from Russia so it wouldn’t have to endlessly rely on NATO for its air defence needs, Foreign Minister Mevlut Cavusoglu has announced.

“Until now, Turkey didn’t have its own air defence systems. At our request, the Netherlands, Italy and Spain deployed their Patriot systems in Turkey. All of these systems are very good, but this was a temporary measure. First they set them up, then they remove them, then they install them again. I’m not saying this as a criticism – it’s a logical rotation, and I sincerely thank our allies for this help. But this suggests that we must have our own air defence systems. We are not going to beg endlessly. This is one reason why we bought the S-400s,” Cavusoglu said, speaking at a joint press conference with NATO Secretary-General Jens Stoltenberg on Friday.

For his part, Stoltenberg reiterated the alliance’s view that Turkey’s Russian-made air defences were not compatible with alliance standards, and could pose a threat to NATO aviation. “We also discussed Turkey’s purchase of Russia’s S-400 missile system. I have repeatedly expressed my concern about the consequences of this decision,” the alliance chief said.

“There are real problems associated with the lack of compatibility with NATO systems, and the potential risk for alliance aircraft,” Stoltenberg stressed.

Cavusoglu told Stoltenberg that Ankara expects “strong solidarity from our allies” in reference to Turkey’s military operation in northern Syria, which Ankara launched on Wednesday. Most of Turkey’s major allies, including the United States, the United Kingdom, France, Germany, Italy, the Netherlands, Denmark, the Czech Republic and others have criticised the incursion, with Washington even threatening sanctions. Norway’s foreign ministry announced Friday that it would halt all new military equipment exports to Turkey amid the Syria operation.

On Thursday, Cavusoglu told media that Ankara was forced to start its operation in Syria due to the continued supply of “sophisticated and heavy” weapons to the Syrian Kurds by the US, accusing Washington of supporting a “terrorist organisation” instead of Turkey, its “NATO ally.”

Turkish forces and their allies from members of the anti-Damascus ‘Syrian National Army’ launched an incursion into northern Syria on Wednesday, justifying the operation by the need to deal with the alleged threat posed by Daesh and Kurdish militants in the border area. Turkey classifies the predominantly Kurdish People’s Protection Units (YPG) militia operating in northern Syria as a ‘terrorist’ entity affiliated with Turkey’s Kurdish Worker's Party (PKK), a separate militia which has waged a decades-long guerrilla campaign in southern Turkey.

Damascus has accused Ankara of “aggressive intentions,” and has repeatedly called on all foreign forces not invited into the country by Syria to leave the country immediately.

Russia and Turkey penned a $2.5 billion agreement on the delivery of S-400 air defence systems to Turkey in late 2017, with deliveries beginning in July. The decision prompted Washington to suspend Ankara’s participation in the F-35 fifth-generation stealth fighter programme. Turkey has also repeatedly expressed interest in purchasing Patriot missile systems from the US, but complained of delays and disagreeable loan conditions. In August, a State Department official said the Patriot offer had expired due to Turkey’s S-400 purchase.