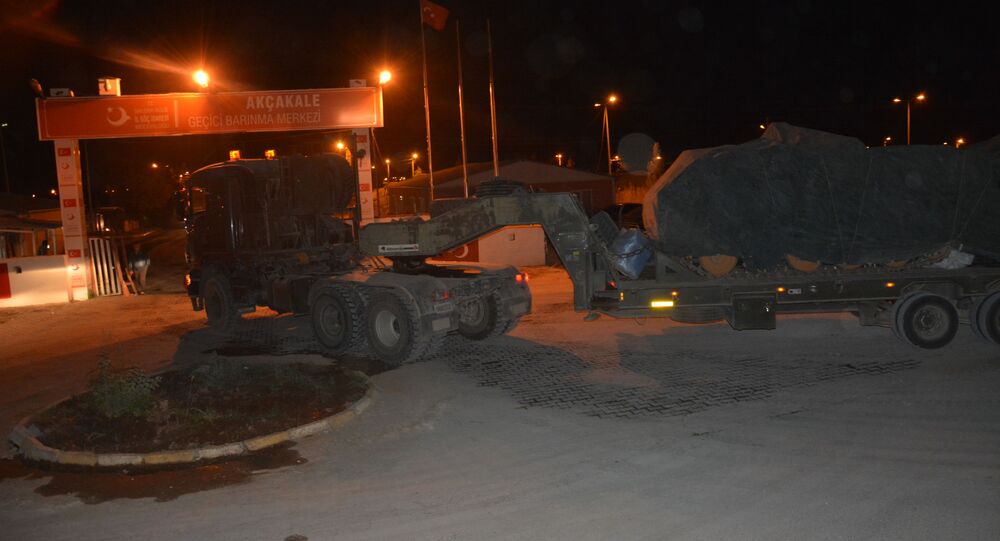 Turkish forces began pouring into northern Syria on Wednesday as part of ‘Operation Peace Spring’, a campaign Ankara says is aimed at clearing the border area of Kurdish militants and Daesh (ISIS)* terrorists and creating a security zone on the Syrian side of the border.

The Syrian Independent Kurdish Association, a group known for its opposition to the Syrian Democratic Forces coalition which enjoys de facto control of northern Syria, has expressed its support for the Turkish-led military operation against the group.

In a statement quoted by Anadolu Agency, the group noted that the “PKK [a Turkish-Kurdish militant group] and its extensions in Syria dragged not only Kurds but all sections in the region into a disaster.”

“To reach a safe-zone, which was a national demand of the Syrian revolution, and to get rid of the terrorist organisations in the region, we declare our support for Operation Peace Spring,” the statement added.

The group appealed to local residents in the region to stay in their homes, and to avoid areas where fighting was taking place. “Do not follow the provocative discourse spread by PKK/PYD,” the association urged.

Abdulaziz Tammo, the Turkey-based president of the Syrian Independent Kurdish Association, has repeatedly criticised the Syrian Democratic Forces Coalition, Syria's Democratic Union Party (PYD) and the People's Protection Units (YPG) in recent months, telling Turkish media late last year that the groups do “not serve or represent the nation’s Kurds”. The YPG was instrumental in defeating Daesh (ISIS) in Syria, but Turkey insists these predominantly Kurdish forces are a terrorist group with links to Turkey’s PKK.

© AP Photo / Staff Sgt. Andrew Goedl
In this Sept. 21, 2019, photo, released by the U.S. Army, a U.S. soldier oversees members of the Syrian Democratic Forces as they demolish a Kurdish fighters' fortification and raise a Tal Abyad Military Council flag over the outpost as part of the so-called "safe zone" near the Turkish border.

The Turkish military and elements of the ‘Syrian National Army’, an anti-Damascus militia group previously known as the Free Syrian Army, began an operation in northern Syria on Wednesday, pointing to a need to deal with the alleged threat posed by Daesh and Kurdish militant formations in the border area.

The deployment of Turkish troops and equipment in the area ahead of the operation has prompted Syria’s Kurdish authorities to announce a mobilisation, and to call on local Kurds to resist.

Turkey’s operation has been condemned by Damascus, who accused Turkey of “aggressive intentions,” and by many of Ankara’s NATO allies. Germany, France, the UK, Italy, the Netherlands, Denmark and the Czech Republic have called on Turkey to immediately halt the campaign. US President Donald Trump called the operation a “bad idea”, and said that in addition to possible sanctions, he would like to see something “much tougher”. On Wednesday, a bipartisan group of senators said they were working on “wide, deep and devastating” “sanctions from hell” against Turkey.

On Thursday, Iran’s Foreign Ministry called for Turkey to immediately withdraw its forces from Syria, saying that while it understands Ankara’s concerns over the security of its borders, a military solution was not the way to resolve them.

Also on Thursday, Turkish President Recep Tayyip Erdogan said 109 "terrorists" (presumably YPG or SDF fighters) had been killed in Turkey’s military operation so far, and warned that Ankara would “open the doors” for Syrian refugees to Europe if Brussels were to dub the Turkish military campaign in Syria an occupation.