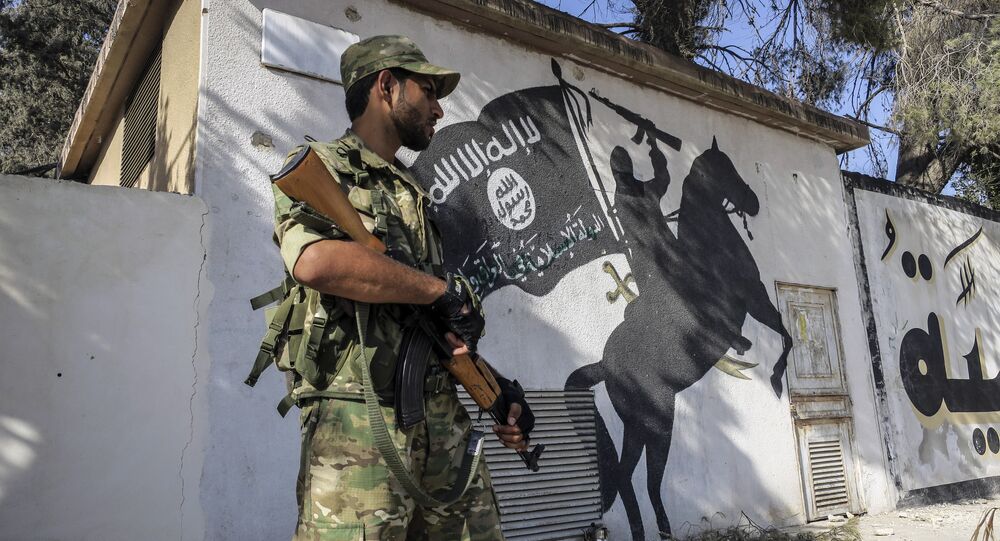 It is estimated that of some 11,000 terrorists being held in Kurdish-run prisons in Syria, several hundred are European nationals. EU member states such as the UK, France and Germany have been unwilling to retrieve their citizens and try them at home, drawing criticism from both the Kurds and the US, their key ally until recently.

European countries may face an influx of Daesh* (ISIS) escapees as a result of Turkey’s military operation in northern Syria, where thousands of foreign jihadi fighters and members of their families are being held in Kurdish detention camps, Donald Trump has said.

Speaking to reporters at the White House on Wednesday, Trump was asked what would happen if Daesh fighters escape from Syrian captivity.

“Well they are going to be escaping to Europe, that's where they want to go,” he replied. “But Europe didn't want them from us. We could have given it to them. They could have had trials, they could have done whatever they wanted, but as usual, it's not reciprocal.”

Who is handling the captured terrorists today?

The Syrian Democratic Forces (SDF) – an alliance of militias led by the mostly-Kurdish People's Protection Units (YPG) – has been the United States’ key ally in Syria and proved instrumental in rooting Daesh jihadists from their strongholds in the northern and eastern parts of the country.

The SDF is estimated to be holding between 11,000 and 12,000 suspected terrorists in make-shift prisons, including around 2,000 foreign recruits. At least several hundred are thought to have travelled there from Europe. A separate camp for internally displaced persons in northeastern Syria holds nearly 70,000 people, including thousands of Daesh family members, according to a September report by the United Nations.

What will happen to them next?

The US and Kurds have repeatedly urged European countries to take their citizens back from Syria, but Europe has been reluctant to comply, in part over concerns that it would be difficult to prove the returnee’s guilt in court.

The future of these detainees was most recently called into question after Turkish troops crossed into northern Syria east of the Euphrates River on Wednesday. Turkey wants to push the Kurdish fighters, who it sees as terrorists, out of the area, and create a buffer zone there to facilitate the return of Syrian refugees.

American troops withdrew from their positions in the region in the days leading up to the offensive, effectively paving the way for Turkey to attack the Kurds (Donald Trump has still threatened to punish Turkey if it goes “off limits” but didn't specify what these “limits” were). The Kurdish fighters vowed to push back, which means that many of them will be leaving their posts at prisons – increasing the chances for the detainees to escape and perhaps regroup.

Speaking to NBC News this week, General Mazloum Kobani of the Syrian Democratic Forces, said that watching over the Daesh prisoners is now a “second priority”.

“We already did not have professional jails or professional prisons to keep those prisoners in,” complained SDF spokesman Mustafa Bali. “The Turkish invasion to our region is going to leave a huge space, because we are forced to pull out some of our troops from the prisons and from the [displaced people] camps to the border to protect our people.”

Bali also claimed that Turkey might use the captured fighters to “threaten” Europe in the future.

One day, when Turkey uses captured ISIS fighters as a threat to Europe and the world just like it uses Syrian refugees now, we will remind those who trusted Turkey in managing detention of militants that their complicit silence was the main reason caused it.

And in a Twitter post earlier this day, the SDF said that Turkish forces had struck one of its prisons holding Daesh detainees.

The Trump administration says the captives will now be Turkey’s responsibility, and it remains to be seen whether Ankara will deploy the resources to manage the tens of thousands of detainees.

*A terror group banned by the United Nations, Russia, the US and numerous other countries.