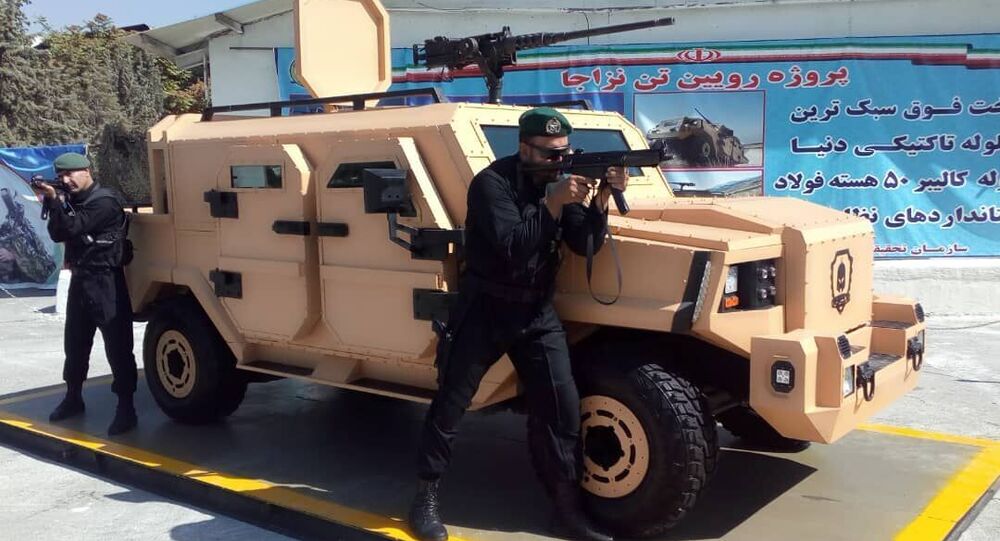 In late August, Iran showed off its new Bavar 373 air defence system and other advanced weapons amid an escalation of tensions in the region that followed the US move to send a carrier strike group to the Middle East in May.

During the event, army officials touted Ruintan as a state-of-the-art vehicle designed to save the lives of personnel on the battlefield or against terrorist attacks. Powerful and agile, the vehicle is specifically resistant to steel core bullets.

The network-based robot Heydar 1 is a six-wheel drive vehicle which can carry loads, turn 360 degrees and detect obstacles in its path.

The officials also touted the Farpad drone designed for reconnaissance and rapid reaction. The unmanned aerial vehicle is equipped with auto-pilot and is capable of taking pictures round the clock.

Bavar 373 is a long-range mobile air defence system with a reported maximum range of 200 km, the ability to launch a variety of missile types, and a flight ceiling of up to 27 km.

The system was just one of multiple new missile, drone and air defence systems and other equipment unveiled by Iran in recent months amid the escalation of tensions in the region which followed the US move to send a carrier strike group to the Middle East in May, in a “direct message” to Tehran.

This was preceded by the Islamic Republic suspending on 8 May its obligations under the 2015 Iran nuclear deal, also known as the Joint Comprehensive Plan of Action (JCPOA), exactly a year after President Trump announced the US’ unilateral withdrawal from the JCPOA, also reinstating harsh economic sanctions against Tehran.

In separate developments, multiple commercial tankers were sabotaged in the Persian Gulf and the Gulf of Oman in mid-May and mid-June, with the US blaming Iran for these attacks, while Tehran claimed they were a bid by the US and its Israeli, Saudi and Emirati allies to escalate the situation.

Tensions escalated further on June 20, when Iran downed a US spy drone over its airspace in the Strait of Hormuz, with Washington insisting that the drone was destroyed over international waters. Adding fuel to the fire was a recent decision by Saudi Arabia and the United Arab Emirates to join a US-led Maritime Coalition that aims to patrol the Persian Gulf waters near Iran's borders.