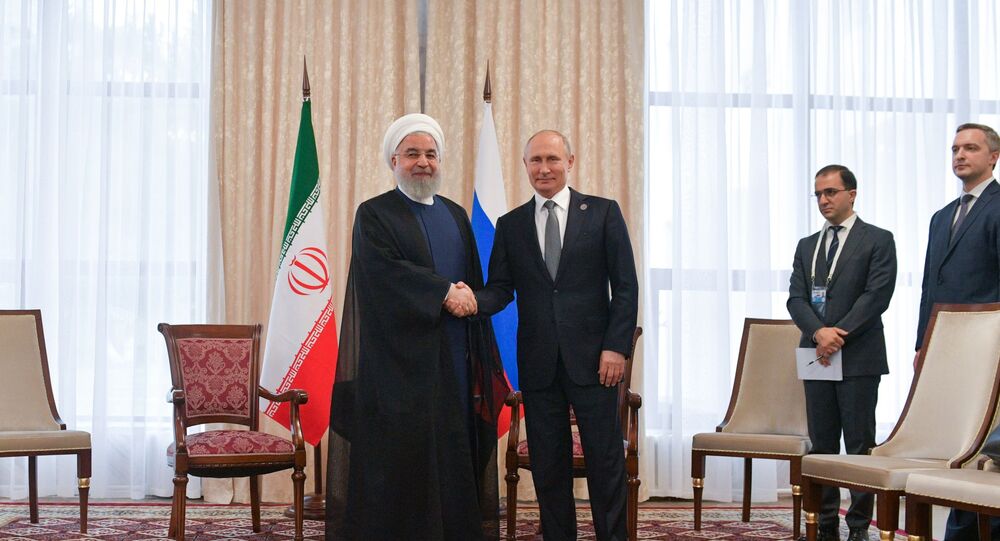 Following the 14 September attacks on Saudi Aramco's oil facilities, the US together with Saudi Arabia and several European countries accused Iran of being behind the attacks.

Russian President Vladimir Putin said after talks with his Iranian counterpart Hassan Rouhani that there was no evidence to blame Iran for the recent attacks on Saudi Arabia's oil facilities.

"We condemn this [attack], but we are against shifting the blame on Iran, as there is no evidence for that," Putin said when asked how he views the attack on Saudi oil facilities.

The Russian president noted that those who orchestrated it did not reach their aims but merely negatively affected the global economy and consumers.

"[Russia] condemns such actions no matter who stands behind them. This was a destructive action that resulted in serious consequences for the global energy market. However, I doubt that those who planned, organized and carried out the attack reached their aims," Putin said.

Speaking further, the Russian president said that due to US sanctions, Iran wasn't able to realise its opportunities, adding that the sanctions were harmful to the global economy and energy industry.

"Iran has an enormous potential, is a very large player on the global energy market, but, unfortunately, due to the sanctions policy of the US administration, Iran cannot fully realize its opportunities and, in my opinion, it is very harmful to the world economy in general, for the global energy industry, because it does not provide an opportunity to ensure stable operation of the sector," Putin said.

At the same time, Mr Putin noted that Iran has a desire to normalise relations with Washington, though Tehran believes that it does not have equal conditions for dialogue with the United States.

"Iran believes that it does not have equal conditions for this dialogue under sanction pressure. But it seems to me that Iran certainly has a desire to normalize the situation, including normalizing relations with the United States," Putin said, explaining why US and Iranian leaders did not meet the recent UN General Assembly in New York.

When asked whether Rouhani would be ready to meet with Trump, Putin said it was better to ask them.

"Our position is that dialogue is always better than any confrontation," he added.

The president also cited meetings of Trump with North Korean leader Kim Jong-un as a striking example of a strong-willed and very balanced, absolutely pragmatic decision aimed at normalizing tense relations between the two states.

On Russia's 'Possible' Meddling in Future US Elections

The Russian president, when asked about the possibility of Russia's interference in future US elections, said jokingly: "Highly likely."

"Highly likely, we have already heard that. He [US Special Counsel Robert Mueller] did not find any evidence of our collusion with [US President Donald] Trump earlier but expressed fears that we could do this in the future. It is funny, or it would be funny if it was not so sad. Because everything we see now in the US domestic political sphere violates Russian-American relations," Putin said at the Russian Energy Week.

According to Mr Putin, certain forces in the US are trying to use anti-Russia rhetoric to attack US President Donald Trump.

"We see what is going on in the United States: [some forces] are using any pretexts to attack President Trump. Now that is Ukraine and all the wrangles linked to it - I mean, the relations with Ukraine and President [Volodymyr] Zelenskyy ... That once again confirms that we had nothing with it [US political games] from the very beginning. They have just looked for pretexts to attack the elected president," Putin said.

The Russian president, however, noted that Moscow was ready to work with any president, US citizens elect.

Commenting on the possibility that his conversation with US President Donald Trump will be published, Mr Putin said that his previous life had taught him to be ready that any of his conversations can be made public.

“My previous life taught me that any of my conversations may be published, and I always proceed from this,” Putin said.

On Monday, the US Treasury announced on its website that Washington imposed sanctions on two Russian nationals and three firms tied to an internet research agency over their alleged interference in the 2018 midterm elections.

The United States has imposed sanctions against Russia for allegedly meddling in US elections in 2016 and 2018. This prompted an investigation into the ostensible Russian vote interference by special prosecutor and former FBI chief Robert Mueller.

After two years of scrutiny, Mueller said that the probe found no evidence of collusion between Trump and his campaign with Russian officials in the run-up to the 2016 US presidential election.