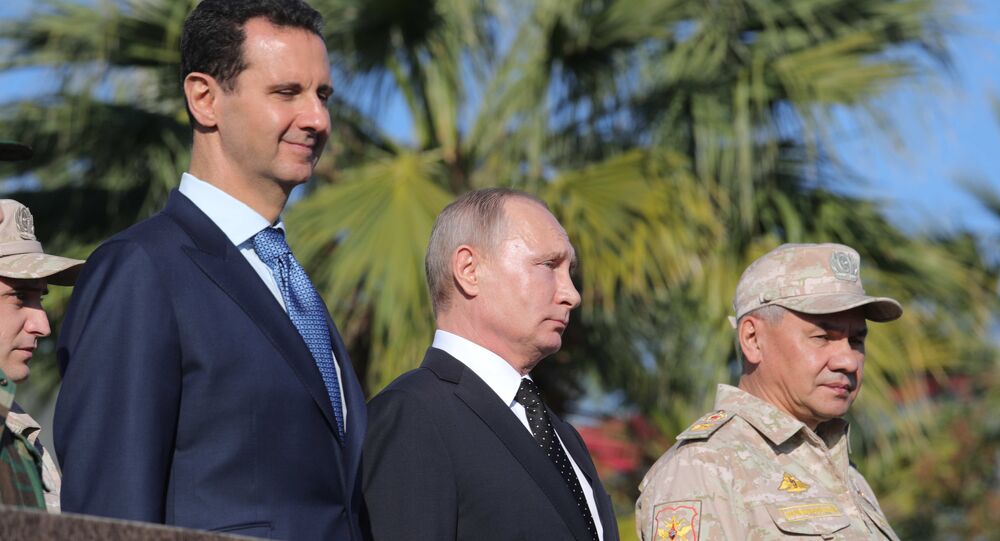 MOSCOW (Sputnik) - Monday marks the fourth anniversary of the counterterrorism operation the Russian Armed Forces carried out in Syria at the latter's request.

The Syrian conflict, which began in March 2011, continues to this day. The Daesh* and Hayat Tahrir al-Sham (formerly known as the Nusra Front), have been the most active extremist groups during the conflict.

Since September 2014, an international coalition led by the United States has been attacking Daesh positions in Syria. However, the operation is being conducted without the approval of the UN Security Council or Damascus.

By the fall of 2015, the situation in Syria was critical. As of September 30, 2015, only 8 percent of the country’s territory was under government control.

On September 30, 2015, then-Chief of Staff of the Russian Presidential Executive Office Sergei Ivanov said that Syrian President Bashar Assad had asked Moscow for military assistance. Russian President Vladimir Putin requested the upper house’s consent to deploy a military contingent abroad, and lawmakers unanimously voted in favor — air support for the Syrian government was declared the purpose of the military operation.

That same day, an aircraft group was deployed to the Hmeimim air base near Latakia and, acting in accordance with Putin’s decision, launched high-precision strikes against Daesh ground targets in Syria.

In an effort to coordinate their anti-terror activities, Russia, Iraq, Iran and Syria established an information center in Baghdad. Its experts started gathering, processing, summarizing and analyzing data on the situation in the region. They also moved to quickly provide this data to the general staff of the countries participating in the center’s activities.

A reinforced marine tactical battalion group was involved in guarding and defending the base. The Russian Navy’s Mediterranean task force defended the base against possible airstrikes and also ensured the delivery of required supplies.

On November 17, 2015, Russia used its strategic bombers for the first time during an aerial operation carried out by Tu-160, Tu-95 and Tu-22M3 bombers. This day will go down in history because Russia’s Tu-160 and Tu-95 bombers had never previously been used in combat.

On November 24 of the same year, a Turkish F-16 aircraft downed a Russian Su-24 over Syrian territory, after which Putin ordered that the Russian air base in Syria be equipped with S-400 air defence systems.

On December 8, 2015, Russia’s submerged Kilo-class Rostov-on-Don submarine launched its Kalibr cruise missiles from the Mediterranean Sea for the first time and hit all designated targets.

These airstrikes resulted in militants starting to retreat and losing most of their frontline weapons and equipment. According to reconnaissance and intelligence reports, the terrorists changed their tactics, became more cautious and started resorting to camouflage more often.

The Russian Aerospace Forces’ operation forced the opposition to enter into peace talks with Damascus in order to settle the crisis by political means.

Intra-Syrian talks began on January 29, 2016, in Geneva in line with UN Security Council Resolution 2254. On February 22 of the same year, Russia and the United States announced a ceasefire between Syrian government forces and the opposition’s paramilitary units. It did not involve IS or other groups listed as terrorist organizations by the security council.

The ceasefire officially entered into force in the early hours of February 27, 2016. In order to monitor compliance, a coordination center for the reconciliation of the warring parties in the Syrian Arab Republic was established at the Hmeimim air base.

One of the center’s main tasks was to facilitate the negotiation process on reconciliation between the government and opposition, with the exception of Daesh* and other terrorist organizations.

The activities of the Russian Aerospace Forces were significantly curtailed following the ceasefire agreement.

Despite withdrawing the group from Syria, Russia did not renounce its obligations to supply the Syrian government with weapons and military equipment and to train military experts. The Hmeimim air base and the Russian Navy’s logistics support facility in Tartus continued their operations.

On December 29, 2016, Putin announced the signing of three important documents. The first stipulated a ceasefire between the Syrian government and the armed opposition in Syria, the second listed various measures to be used to monitor the ceasefire regime, and the third noted a readiness to launch talks on the Syrian peace settlement.

These documents were the result of two-month Turkish-mediated talks between the Russian Defence Ministry, leaders of the moderate Syrian opposition groups, and Damascus.

A total of seven groups that were the core of the armed opposition, including some 60,000 militants, signed ceasefire agreements.

The ceasefire entered into force across the country at midnight on December 30, 2016, with Russia, Turkey and Iran acting as its guarantors.

On November 21, 2017, Putin said at a meeting with Assad in Russia’s resort city of Sochi that the operation against militants in Syria was coming to an end. In turn, Assad said that the efforts of the Russian army had contributed to the preservation of Syrian statehood.

On December 6, 2017, Putin said that the Daesh had been completely defeated on both banks of the Euphrates river in Syria. Russia’s General Staff issued a similar statement.

On December 11 of the same year, Putin ordered the withdrawal of a significant number of troops to begin. It was announced that Hmeymim air base and the facility in Tartus would be used on a full-time basis.

September 17, 2018, a Russian Il-20 was downed in 35 kilometers (21.7 miles) off the Mediterranean coast when it was on its way back to the Hmeymim air base. At the same time, four Israeli F-16 jets carried out attacks on Syrian targets in Latakia. As Russian Defence Ministry stated, the Israeli jets used the Russian one as a shield against the Syrian air defence. The Il-20 was shot down by an S-200 missile. 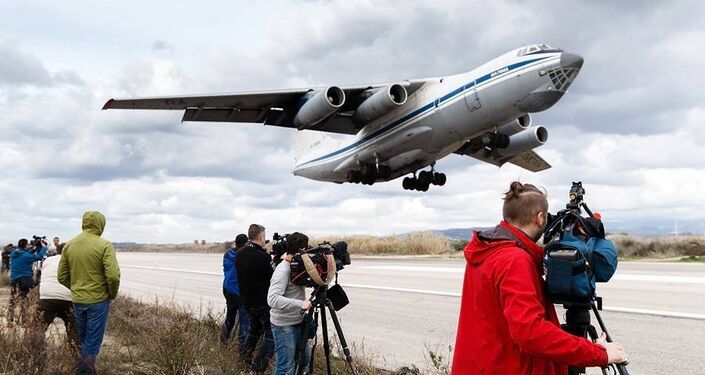 © Photo : Facebook/ Ministry of Defence of the Russian Federation
Foreign journalists at the Hmeymim airbase in Syria

In early October 2018, Shoigu announced that four launchers had been deployed to Syria to protect Russian military personnel from airstrikes, and that the local military would be trained for three months to operate them.

By the end of 2018, the main group of the Russian Air Force was withdrawn from Syria, along with equipment and weapons that were not part of Hmeymim and Tartus bases.

According to the Russian Defence Ministry, during the operation in Syria, over 63,000 Russian military personnel, including 434 generals and about 26,000 officers, gained combat experience in Syria, while 231 types of modern and modernized weapons were tested.

Production for 12 types of prospective Russian weapons was halted after tests for them during the counterterrorism operation in Syria proved to be unsuccessful, while another 300 types were upgraded.

The Russian Aerospace Forces carried out over 40,000 missions, including over 21,000 sorties at night, while the Russian Navy carried out 189 campaigns using 86 ships, 14 submarines and 83 other vessels.

Notably, the Admiral Kuznetsov aircraft carrier was used for the first time on November 15, 2016.

About 122,000 terrorist targets were destroyed; over 87,500 militants were killed; 1,411 settlements, including key cities, were liberated; and all major communications were unblocked during combat operations.

The counterterrorism operation led to Syrian government troops recovering 96.5 percent of their territory — they only controlled 8 percent at the start of the conflict.

Currently, the Russian aviation unit and Navy logistics base are operating at the Hmeymim air base and in Tartus, respectively. According to Shoigu, their composition is standard, and the number is comparable to those at military bases operating in Kyrgyzstan, Tajikistan and Armenia.

© REUTERS / SANA
Syria's President Bashar al-Assad visits a Russian air base at Hmeymim, in western Syria in this handout picture posted on SANA on June 27, 2017, Syria.

In addition, military advisers, special operations forces, members of the Russian center for Syrian reconciliation and the military police continue to fulfill their tasks in Syria.

Russia has reduced its air operations in Syria to the minimum required to conduct combat training and reconnaissance.

A large-scale program to restore peace and assist refugees in returning home was launched. Interdepartmental coordination headquarters were created to coordinate this work in Russia, Syria, Lebanon and Jordan. In coordination with authorized international organizations, they resolve issues related to the return of refugees and provide them with everything they need.

Thanks to Russia's efforts, conditions for resuming the activities of UN peacekeeping forces deployed to the Golan Heights, the contested area between Syria and Israel, in accordance with UN Security Council’s Resolution 350 were created.

Syrian peace settlement talks are held in two cities, Geneva and Nur-Sultan. To date, there have been 13 rounds of negotiations in the Astana format (the Kazakh capital Astana was renamed to Nur-Sultan in late March 2019, but the name of the talks remained unchanged), which were conducted at the initiative of Russia, Iran, and Turkey. Either others were held in the Geneva format under the auspices of the United Nations. A special meeting was held in Vienna in January 2018.

The Syrian National Dialogue Congress was held in Sochi on January 30, 2018, and became the first attempt since the beginning of the conflict to bring together a large number of participants at one meeting site. The decision to create a constitutional commission, which will operate in Geneva, was the main result of the congress.

Syrian settlement is also being discussed by the leaders of Russia, Iran and Turkey at trilateral summits. The heads of state have already held five such meetings and agreed on specific measures to be used to improve the humanitarian situation and intensify the political process in the country.