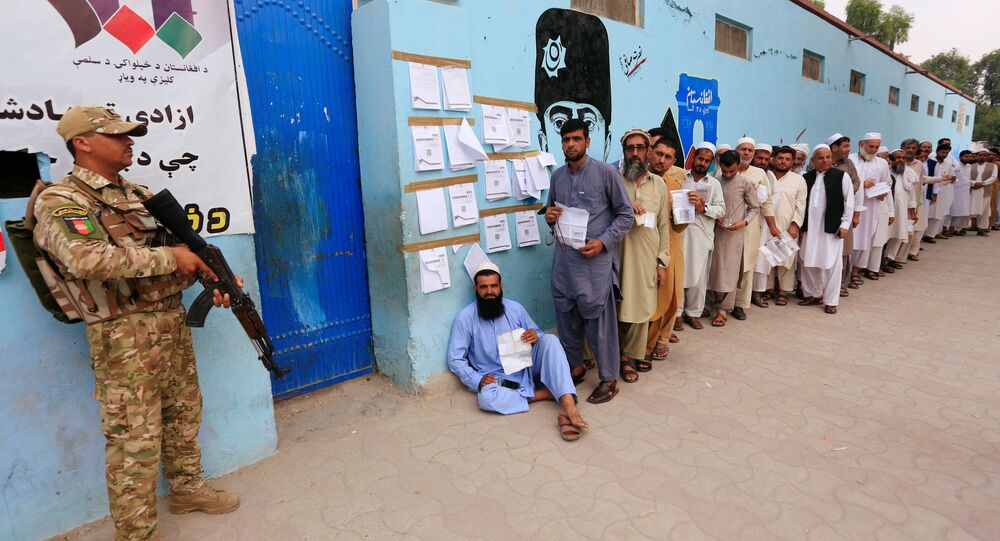 KABUL (Sputnik) - Nationals of Afghanistan vote on Saturday to elect the country's president in an election that saw around 9.5 million people registered for casting their ballots. However, the election process was repeatedly disrupted by the attacks launched by the Taliban group which vowed to disrupt the vote.

A child died while nine people were injured in missile attacks in Helmand province in southern Afghanistan.

At least 10 missiles were fired at the city of Lashkar Gah and Gereshk town in the province.

Local authorities have not officially confirmed the casualties.

In the meantime, at least one person has been killed and seven injured, including children, in a missile strike carried out by the Taliban group in the southern Afghan province of Urozgan. The missile hit a residential house in the city of Tarinkot. One woman was killed on the spot. The missile also injured a man, a woman and five children.

Attacks in the East of the Country

The east of the country was also subject to bombings. According to a source in the Nangarhar governor's office, the eastern Afghan province of Nangarhar was hit by at least eight bomb attacks on Saturday and at least seven people were injured.

In the meantime, one more source, this time in the security sphere, revealed that there were 17 bomb blasts, which killed one person and injured 17 others.

Interior Ministry spokesman Nusrat Rahimi said at a news conference that no major explosion had occurred so far. He added that all minor blasts took place outside the city centres.

The Taliban group, which vowed to disrupt Saturday's presidential vote, carried out at least 314 major and small attacks throughout the country on the election day, Taliban spokesman Zabiullah Mujahid claimed on Saturday.

At least 159 soldiers and policemen who were guarding the polling centres were killed and 93 others injured, according to Mujahid.

The Taliban spokesman vowed to continue attacks on the electoral process.

The group said on Saturday morning that they had blocked access to polling stations in some provinces and attacked some centres.

Earlier in the day, three people were wounded in a blast near a polling station in Kandahar, just hours after the start of presidential elections.

Soon after the incident, a separate blast rocked a polling centre in the Afghan capital of Kabul. No casualties were reported, but authorities have suspended voting to secure the area. Another bomb attack soon followed killing one person and injuring two others at a polling station in Amarkhil high school in Nangarhar Province.

Afghan citizens headed to polling stations this morning, with the government dispatching 72,000 security officers to protect voters amid threats from the Taliban movement.