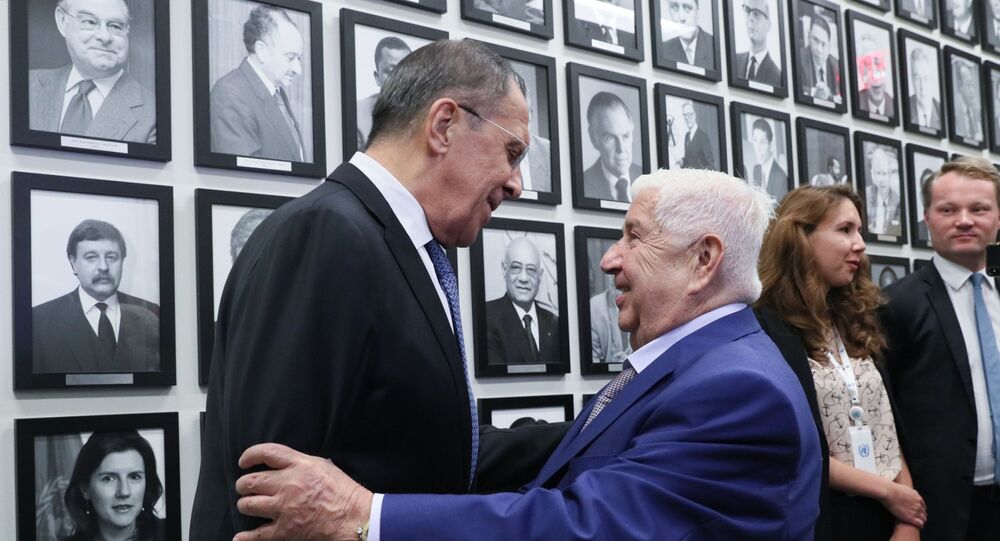 On Thursday, Lavrov said that Moscow may resort to advocating for the relocation of the UN headquarters, currently located in New York City, amid the United States' refusal to grant visas to 10 members of the Russian delegation for the UN General Assembly’s high-level week.

Syrian Foreign Minister Walid Muallem said that he supports the relocation of the United Nations headquarters earlier proposed by Russia.

"Why not [...] Because we have difficulties. Look at the barriers everywhere," Muallem said on Friday, responding to whether he supported the issue raised by Russian Foreign Minister Sergey Lavrov.

When asked if members of the Syrian delegation faced any issues in receiving US visas, Muallem said that the diplomats had not faced such an obstacle.

Konstantin Kosachev and Leonid Slutsky, the heads of the international affairs committees of both houses of the Russian parliament, were among those delegates who did not receive visas to participate in this years' UNGA session.

The Russian Foreign Ministry slammed the United States for describing the situation as a technical problem, arguing that Russian delegates met all the deadlines for sending visa documents.

The Syrian foreign minister also noted that Ankara’s plans to establish a permanent US-Turkish patrol base in the country’s northeast are rumors, adding that the Arab republic will defend its territorial sovereignty.

"This is just throwing rumors, throwing lies [...] This is our territory and we will defend our sovereignty," Muallem said on Friday.

Muallem added that he discussed the issue with Russia and Iran, guarantor states of the Syrian ceasefire alongside Turkey, adding that the two countries stood by the territorial integrity of the Arab republic.

When asked if he believed such military bases could be created, Muallem said that this would be difficult to achieve on the ground.

"This is some dreams of Mr. [Turkish President Recep Tayyip] Erdogan, but on the ground, this is very difficult to achieve," the foreign minister pointed out.

Earlier in September, Turkish Defence Minister Hulusi Akar announced plans to set up joint Turkish-US permanent bases in a safe zone to the east of the Euphrates River in Syria to patrol the region.

In August, the United States and Turkey reached a deal to create a safe zone along Syria’s border with Turkey and to establish a joint US-Turkish operations center.

Turkey considers the Kurdish militias operating in northern Syria to be a threat to its security, and has sought to make them withdraw from the region. Meanwhile, the United States has been supporting the groups with various measures, including providing weapons and training.

The Syrian government decried the safe zone deal between Turkey and the United States, calling both countries occupiers, since they operate in Syria without Damascus' authorization.

Muallem commented on a discussion he had with UN Secretary-General Antonio Guterres related to the recently established Syrian Constitutional Committee.

"One of the items we discussed about the constitutional committee is how much it is important for the future of Syria," Muallem said on Friday.

When asked whether the date of the first meeting of the committee had been determined, the foreign minister said, "not yet."

On Monday, the United Nations announced that the composition of the committee had been finally agreed upon following months of consultations. The committee, tasked with creating Syria’s constitution, includes representatives of the Syrian government, opposition and civil society.

The war in Syria between President Bashar Assad's government and various opposition groups and terrorist organizations has been ongoing since 2011.

The international community has been seeking to settle the conflict through various formats, including the Astana-format reconciliation talks, held since January 2017. A May 2017 deal to establish de-escalation zones to bring hostilities in Syria to an end signed by Iran, Turkey and Russia, the guarantor states of the Syrian ceasefire, became one of the highlights of the talks.

In January 2018, Syria's sides met in the Russian city of Sochi, where a landmark agreement to form the constitutional committee was reached.

Muallem shared his take on the Astana talks on the Syrian settlement, noting that the latter are necessary and helpful amid the recent formation of the Syrian Constitutional Committee.

"It [the Astana process] is important. It is important and helpful [...] Because before, they helped in solving many issues and they continue to work to solve other issues," Muallem said on Friday.

The Astana-format talks on the reconciliation of Syria's conflicting sides were first held in January 2017. The talks were brokered by Russia, Turkey and Iran, the three guarantor states of the ceasefire agreement reached between Syrian government forces and various armed opposition groups. Since then, multiple rounds of negotiations in the Kazakh capital, subsequently renamed Nur-Sultan, have been held.

The most recent, 13th, round of consultations was held in Nur-Sultan in early August.

Earlier in September, Russian President Vladimir Putin said the next round of the Astana-format consultations would be held in the Kazakh capital in October.