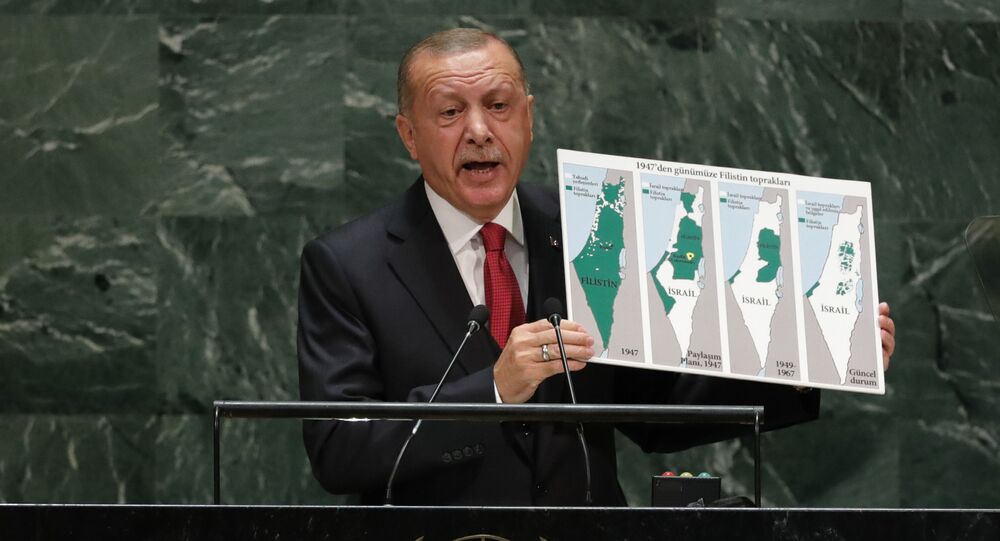 Turkey’s relations with Israel soured in the past decade over the volatile situation in Gaza; President Erdogan, a major champion of the Palestinian cause, has repeatedly condemned Israel for its hardline stand on the enclave, always prompting a stern rebuke.

Israel has reacted furiously to a recent speech by Turkish President Erdogan, in which he compared the treatment of Palestinians in the Gaza Strip to the Holocaust.

Israeli Prime Minister Netanyahu accused Erdogan of lying, recalling Turkey’s conflict with Kurds and its denial of accusations of conducting a genocide during World War I in Armenia. “Someone who does not stop lying, who slaughters Kurds, who denies the massacre of the Armenians, should not preach to Israel,” he said. “Stop lying, Erdogan.”

Foreign Minister Israel Katz stuck a similarly defiant tone and accused Erdogan of antisemitism. “There is no other way to interpret Erdogan’s crude and vile words - it is antisemitism, clear cut,” he tweeted.

There is no other way to interpret Erdogan’s crude and vile words - it is antisemitism, clear cut. This is proof that the responsibility of #HolocaustRemembrance is more relevant now than ever.

What Did Erdogan Say?

The latest words in the ongoing quarrel came immediately after Erdogan’s heated address to world leaders at the United Nations General Assembly on Tuesday; the Turkish president said that the Palestinian territories had become ”one of the places on Earth where injustice prevails the most” and laid the blame directly on Israel.

He condemned the Israel-imposed blockade on the Gaza Strip, saying that Turkey views the Holocaust “in the same way we view those besieging Gaza and carrying out massacres in it.”

At one point during the address, he brandished a time-lapsed map of Israel from 1948 to date, which he claimed showed how Israel had seized Palestinian lands.

“Now, I am asking from the rostrum of the United Nations General Assembly; where are the borders of the State of Israel?” he asked rhetorically of the world leaders. “Is it the 1948 borders, the 1967 borders, or is there any other border?”

Where do Israel and Turkey Stand on Gaza?

Since Erdogan first came to office as the country's prime minister in 2003, relations between Ankara and Tel Aviv have soured significantly. Turkey’s president is advocating the Palestinian cause and supports a two-state solution, which envisages an independent Palestinian state in the West Bank and Gaza.

Israel unilaterally pulled its forces out of Gaza and evicted all of its settlers from the enclave in 2005. Two years later, Islamist Hamas militants seized control of the strip during a brief conflict with rival Palestinian faction Fatah, which currently controls parts of the West Bank.

With Hamas becoming the de facto governing authority in Gaza, Israel and neighbouring Egypt imposed a land, sea and air blockade on the Palestinian enclave over security concerns. The Israeli military controls the movement of people between Gaza and Israel to prevent the entry of terrorists and arms into the country.
Israel and Hamas have negotiated multiple ceasefire agreements that would only halt new rounds of hostilities, while the peace process is still in a deadlock.

Erdogan and Netanyahu have been embroiled in a seemingly endless war of words over Gaza for quite a while now. As early as May this year, he blamed Israel for aggression and atrocities after the Turkish Anadolu news agency’s office in Gaza was hit in a retaliatory Israeli airstrike in response to the launch of around 250 rockets by Palestinian militants.

In the wake of the deadly clashes on the Gaza-Israel border, which followed the US Embassy’s relocation to Jerusalem last year, Erdogan branded Netanyahu a “tyrant” and a “thief”. The Israeli prime minister shot back by calling Erdogan a “dictator” and a “joke”.

Israel-Turkey relations saw a diplomatic freeze in 2010, after 10 Turkish activists that were attempting to bring humanitarian aid to Gaza through the blockade were killed by Israeli commandos. Israel said its troops opened fire after they were attacked when they boarded the ships. Benjamin Netanyahu brought apologies to Erdogan on behalf of his nation in 2013, and the diplomatic ties were restored in 2016.