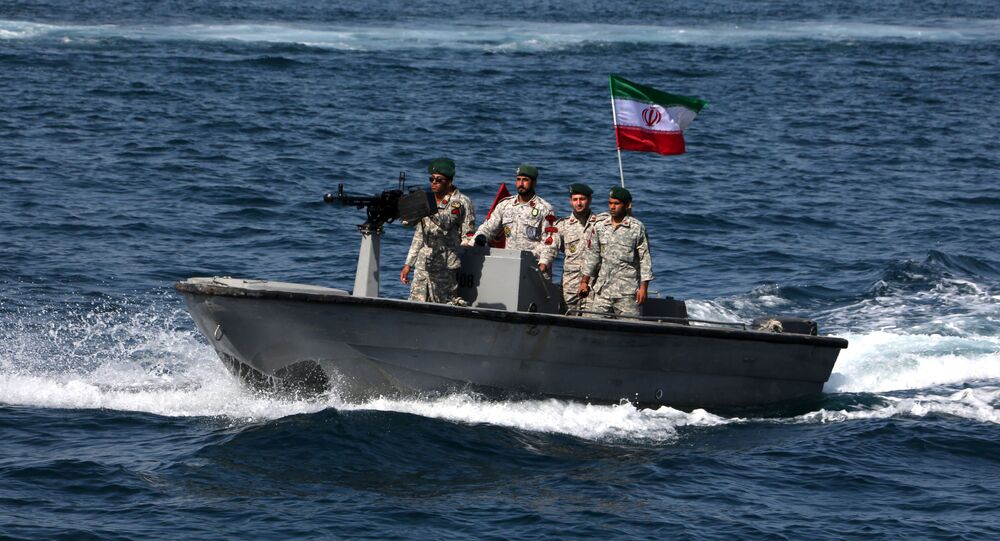 Earlier, Iranian President Hassan Rouhani said that his country would propose a new initiative to ensure the security of the Persian Gulf and the Sea of Oman at this week's UN General Assembly in New York, with the plan calling for cooperation between the countries of the region.

"Initially, this security coalition in the Persian Gulf should include Iran, Iraq, Saudi Arabia, Bahrain, the United Arab Emirates, Qatar, Oman, Kuwait, and possibly Yemen," Zarif said, speaking to reporters at a working breakfast with journalists on the eve of the UN General Assembly.

According to Zarif, the coalition concept, set to be formally announced and elaborated upon by Iranian President Hassan Rouhani later this week, would act under the auspices of the United Nations.

Zarif set off to New York City for the United Nations' General Assembly on Monday, with the country's president set to present a plan for a 'Coalition of Hope' initiative in the Gulf, with the initiative seeking to ensure regional security using local capabilities, while keeping outside powers, including the United States, the UK and Israel out.

Rouhani has touted the 'Coalition of Hope' initiative as a way to solve the region's security concerns, and said that foreign forces could, however, "cause problems and insecurity for our nation and the region."

In Monday's remarks, Zarif also indicated that Tehran was not opposed to working with Russia on a concept of maritime security in the Persian Gulf. "When I attended the Valdai Forum, I proposed that Russia be involved in our concept," Zarif said. "Many aspects of our concepts correspond to one another," the foreign minister noted.

Earlier this month, after talks with Russian Foreign Minister Sergei Lavrov, Zarif said that Tehran could only welcome Russia's initiative for a "non-aggression pact with our neighbours in the Persian Gulf", and would "encourage our Russian friends to move further on the matter". Lavrov emphasised, for his part, that both countries were interested in seeing the countries of the Persian Gulf region coming to a mutually acceptable way of providing for stable security.

Meeting Between Rouhani and Trump?

Commenting on the prospects of a meeting between the Iranian and US presidents at the upcoming General Assembly, Zarif said such a meeting would be possible, but only in the 5+1 format like the one used to agree to the 2015 Iran nuclear deal, and not at the bilateral level. Furthermore, Zarif said, Iran's delegation at the UN has not received any request for a meeting from the US side.

The foreign minister suggested that a Rouhani-Trump meeting "for the sake of a photograph" would only worsen relations.

Tensions between Iran and Saudi Arabia skyrocketed to their highest levels in years last week following a sabotage attack on two major Saudi Aramco oil facilities which temporarily crippled a substantial portion of Riyadh' oil production capabilities. Yemen's Houthi militia claimed responsibility for the strikes, but the United States almost immediately blamed Iran. Riyadh has similarly alleged that its preliminary findings led it to suggest that the attacks were not launched from Yemeni territory, and used Iranian-made weapons. Iran has vocally denied claims that it was responsible, accusing the US of moving from a policy of "maximum pressure" to one of "maximum deceit" with its allegations.

The US and several of its allies announced the formation of a maritime security coalition in the Gulf earlier this year, with that coalition specifically aimed against the alleged 'threat' of Iran to commercial vessels passing through the Strait of Hormuz. The UK, Australia, Saudi Arabia, the United Arab Emirates and Bahrain have formally joined the US-led effort, while other allies including France and Germany have decided to stay out.

In a separate development on Monday, French President Emmanuel Macron urged caution in attributing blame for the recent attacks on Saudi oil facilities, with his comments at odds with British Prime Minister Boris Johnson's statement earlier that London has concluded that Iran was responsible for the attacks.