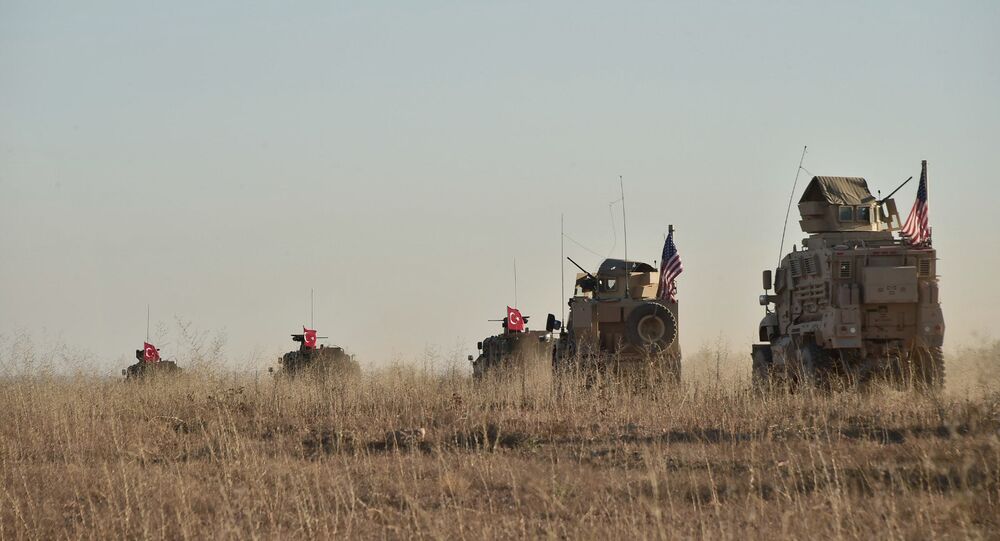 ‘US is Playing Double Game’: Residents on Turkish-Syrian Border Unhappy With US Patrols in the Area

Over the weekend the United States and Turkey began their first joint patrols in the northern part of Syria along the border with Turkey. This comes after Ankara and Washington agreed last month to set up a “safe zone” along the Syrian-Turkish border that would serve as a buffer between the US-backed Kurdish People’s Protection Units, or YPG.

The American-backed YPG militias have led the Syrian Democratic Forces (SDF) in the fight against Daesh, but many residents of border towns and villages are suspicious of Turkey’s cooperation with the United States because they do not regard the US as a real ally of Turkey due to American support for the Kurdish forces.

Ankara considers the YPG a terrorist group and an offshoot of the outlawed Kurdistan Workers Party (PKK), which has been fighting to establish a Kurdish autonomous region in southeast Turkey since the early 1980s.

Locals in the Turkish border towns of Akçaoba, Akçakale, and Ziyaret are in favour of creating a buffer zone but under the control of Turkey without US involvement. They believe that America is playing a double game and is in the region to further its own goals. That’s the view of local resident Mahmut Sönmez:

“We want Turkey to control the ‘safe zone’ because this issue is directly related to our security and the security of our country. We live right on the border, and the presence of YPG here worries us all very much. Our security will be ensured when the YPG units are withdrawn from the border and the Turkish military takes their place. Turkey should create a ‘safe zone’ as soon as possible, and not follow the United States lead, which deliberately drags out time”, Sönmez said.

The Americans have always been dishonest with Turkey, Sönmez added:

“The United States came to our border from a distance of 13,000 km. And there’s only one answer to the question of what they are doing here: they are pursuing their interests, and they want to further destabilise the region. Americans must leave Syria. Because of them, the chaos in the country is only intensifying”, according to the local resident.

Sönmez's view is echoed by local resident Ibrahim Güneş who also believes that a “safe zone” should be created without US involvement.

“The only way to ensure security at the border is to place the Turkish military on both sides. America cannot be trusted, it is playing a double game: on the one hand, it supplies weapons to the YPG, on the other hand, calls Turkey its ally. But Turkey’s real ally would not help its enemy, a terrorist organisation. We are very concerned that the United States is arming the YPG in the immediate vicinity of our border. These actions indicate that the United States is in fact an ally of the YPG, and is hostile towards Turkey”, Güneş stated.

Another local, Mustafa Yüksel, stressed that Turkey has the right to ensure security on both sides of the border, clearing it of YPG’s presence and creating a “safe zone”.

“Our relatives live in the Syrian villages on the other side of the border; we keep in touch with them every day by phone. They say that the US military carries out daily patrols along with YPG units. If a ‘safe zone’ is created, Syrian refugees will be able to return home. Now many refugees cannot come to their homes because they are afraid of the YPG. Many refugees live in Akçakale. They say they will return to their homeland only if the YPG forces are withdrawn from the region. Tel Abyad and Ras Al Ain are Arab regions, but the Arab population does not trust the YPG because they are not good with the Arabs”, he said.

According to Abid Ipek, the “safe zone” cannot be formed until the YPG units completely leave the region:

“We were all very happy when the Turkish military was patrolling the border, but a ‘safe zone’ has not yet been formed; joint patrols are currently underway. It will be possible to talk about creating a ‘safe zone’ when the YPG militia completely leaves the area and the Turkish armed forces will take their place. As for the United States, they are not fulfiling their obligations regarding the creation of a ‘safe zone’. Judging by what local residents tell us on the Syrian side of the border, YPG units were not withdrawn from the border zone. They just changed into civilian clothes, and continue to patrol the border areas. We do not trust America”, the local resident concluded.

The Turkish Defence Ministry has confirmed the start of the joint patrols, while US Army spokesman Col. Myles B. Caggins said that Turkish and US forces “observed first-hand progress on destroyed YPG fortifications and areas where YPG elements voluntarily departed the area”.

Caggins also added that the patrol will allow the coalition and US’s Syrian Democratic Forces partners to “remain focused on achieving the enduring defeat of Daesh*”, while at the same time addressing Ankara’s security concerns.